A trip down to Reading had been planned for a few weeks to attend A Caching Christmas Cracker by The Cache Hoppers.  We had intended to make a very early start and do some caching in the area but a change to our son's working hours meant we were later leaving than we'd intended.

We arrived in Reading and headed to McDonalds for coffee and lucky for us there was a cache about 100ft from our car.


Then off to the event, we were among the first to arrive and the pub hasn't opened so we had a stroll up the high street to find 'Welcome to Theale High Street' , usually quite a tricky to locate cache but for us it was easy peasy as it was already in the hands of Mollyjak!

A very enjoyable event, well organised, a lovely friendly atmosphere, great food, lots of geo-chat, friends new and old, what more could you ask for.

Over lunch our daughter Pegz solved a new puzzle that was handed out, Santa's Been at The Ale, so after lunch we headed off to find it.  It was only when we passed 'Theale' Post office that the pun dawned on us, doh!!

We are always intrigued by 'unfortunate' street names and spotted this on on the way to a cache just off the high street in Theale.  Liane of The Cache Hoppers mentioned the history behind it: 'There was an armed skirmish at Theale, not long after the First Battle of Newbury. Prince Rupert's cavalry attacked parliamentary troops as they made their way back to London. Many soldiers died in the fighting that ensued and their bodies were later buried in Dead Man's Lane.' (http://www.berkshirehistory.com/villages/theale.html)

All too soon it was time to head back to the Midlands.  A great day out!

Almost forgot to mention the strange sight on the M40 that we spotted on the way.  A circle of 70 plastic pigs on near to Junction 12 at Gaydon. 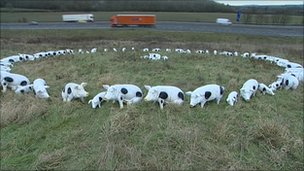 This photo was taken from the BBC website as we'd gone past before we realised what it was.

Email ThisBlogThis!Share to TwitterShare to FacebookShare to Pinterest
Labels: Event