We had originally planned to be in Turkey this week to celebrate our Silver Wedding Anniversary .... yes I know it's hard to believe

but after a lot of thought decided to cancel - the reasons outlined  here..... So how did Turkey turn into North West Germany? I hear you ask... well, during our honeymoon, we found that many Turks had German as a second language and we thought it would be really useful to learn. So that Autumn we signed up for German classes at our local college and also followed the BBC Deutsch Direkt Television and radio course.  Deutsch Direkt was filmed and recorded  around Bremen and we decided back then that one day we'd like to go and visit the locations mentioned.  So this seemed like an ideal opportunity to combine a visit to Bremen and also visit some of the other states of Germany that we haven't yet visited and then work our way down to Essen and finish off with the Giga event a week later.  This is just a brief blog on the main highlights of our trip.

So, back to the trip... we headed to Manchester airport on Friday afternoon, which is now our 'local' airport and about a 45 minute drive or if necessary we can get the local train which will take us straight to the airport.  The flight was delayed for over and hour and we finally arrived in Hamburg at 22:30 CET. 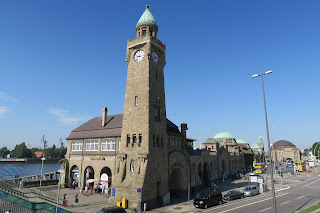 We left our hire car at the hotel and got the U-bahn into Hamburg to do a bit of sightseeing and find a handful of caches.  The weather was gloriously hot and there wasn't a cloud in the sky.

First stop was the webcam.  We were a little unsure at first how to reach the spot as there was a lot of construction work going on on the quay side but we soon found our way to where we needed to be and managed to get a screen grab. 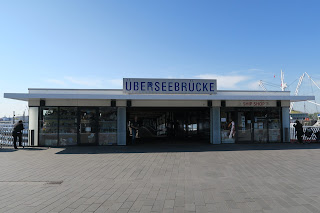 Then we headed off to the Elbe Tunnel. The 426 m tunnel is a pedestrian, bike and motorized vehicle tunnel which opened in 1911.  There are four very large lifts that take vehicles to the bottom. 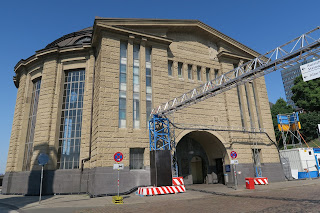 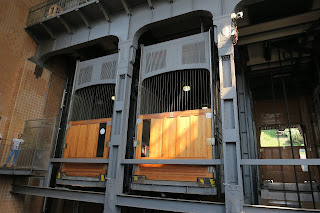 It's still in use today although other bridges and tunnels have been built to allow for the increase in traffic over the years. 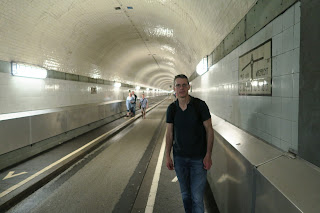 Then back on the U-Bahn and a couple of stops before we reached the Speicherstadt. 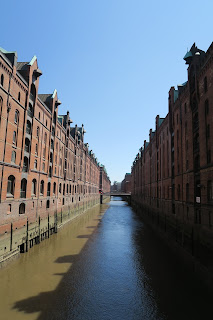 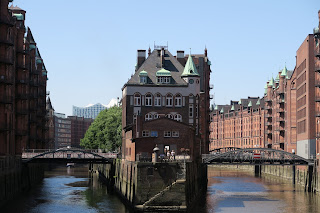 We found our way to a good vantage point to take a photo of the Wasserschloss before heading into Hamburg for some lunch.  The temperatures were up to the high 20s now and we were glad to find some shade to cool down.  I was really keen to see the Wasserschloss lit up at night so we made a mental note to head back later after dark. 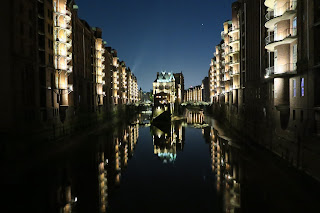 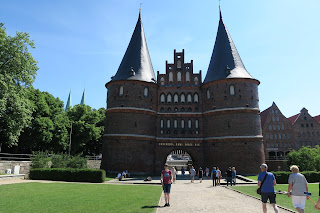 Today's plan was to visit Lübeck.  It was about an hour's drive from Hamburg. The historic city of Lübeck is a UNESCO World Heritage site and is renowned for its Brick Gothic architecture.  We started off doing a town tour Wherigo hoping it would show us the main sites but it soon became apparent it was skipping a lot of the interesting buildings so we aborted that and returned to it in the evening and did the final few stages by car.


Lübeck is the birthplace of Marzipan, not really keen on eating the stuff but thought it would be fun to see where it was made and had a visit to the Niedregger Marzipan shop where there was marzipan moulded into just about everything you can imagine. 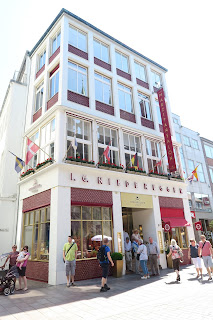 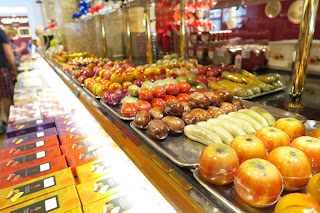 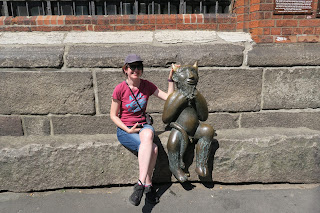 On the way to Bremen we made a detour to do the Voss Margarine Multi.  It had over 4000 favourites so we decided it had to be worth a look .... and it was!  We can't given any spoilers but safe to say, if you get the chance - DO IT!

We arrived in Bremen and headed straight for our apartment.  Then once we'd unpacked it was time to head out on the town for the evening.

We have wanted to visit Bremen quite a while. In fact it was 25 years ago that we first learnt all about Bremen and Die Bremer Stadtmusikanten while doing a German language course set in the city.
So up bright and early ready to spend the day visiting all the main points of interest in the town. 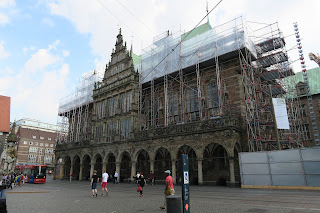 We spent the rest of the day generally admiring the architecture in  BottcherStrasse and the Schnoor.
The most favourited cache in the area was at the Hauptbahnhof. It had us confused for a bit  not knowing whether to be on the platform or in the road tunnel underneath... or in the tunnel or on the platform... or the next platform but eventually I spotted something and thought 'hmmm.. I wonder...' and yes, it was the cache.  Not sure it was worthy of a favourite as it was so tedious tying to find it. 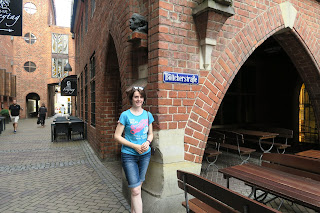 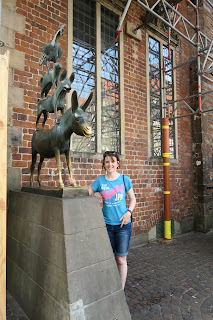 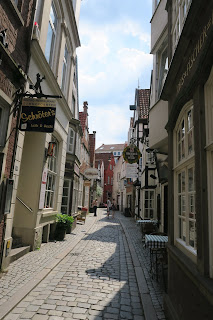 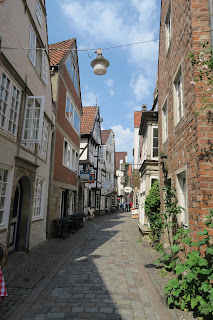 One of the caches we'd planned to do was a puzzle cache which involved  starting at the Stadtmusikanten (or so we thought) and projecting a waypoint a given distance at a given bearing. Easy huh? Well yeah until we searched GZ for a while and then realised that the starting point was not the listed co-ordinates but a different statue of the musicians and something only a local would know of surely.

However, incredibly we spotted it by chance while walking back to our apartment, we'd just stopped for some Spaghetti Eis and Mark spotted just what we were looking for and life was good again! 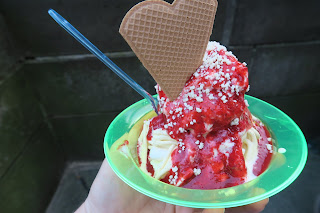 Mark had booked an apartment  in Essen mainly because it was within easy reach of the Giga venue and because it looked good on Booking.com.  It soon became apparent that the website photos must have mainly been of a second, larger apartment because this one was tiny. Not only that, it had books everywhere! Mark counted 91.  The 'fully fitted kitchen' also had a washing machine but no cutlery drawer... odd. Oh yeah, and empty picture frames hanging on the walls....

Years ago we bought a bicycle shaped geocoin with the words 'Munster - Germany's Cycling Capital City' so we'd decided back then, should the opportunity arise, we'd visit. This was just such an opportunity.

In Münster, the bicycle is the most common means of transport.  More than 100,000 people travel the roads by bike every day here and there are twice as many bicycles as residents, namely 500,000!

We parked in a multi-story  car park near the Hauptbahnhof and made our way to the Rad Station - a massive underground bike park which also hired out bikes and repaired customers' bikes.


The flagship route of this 'cycling capital' is the Promenade - a cycle path around the outside of the old town  following the line of the original town walls. It has to be said that cycling on this path was great but much of the rest of the  area was pretty much the same as other German towns where everyone is cycling with purpose and it's just another form of transport - which is probably just as well really because if everyone was cycling around for pleasure it would be total chaos because there were bikes everywhere. 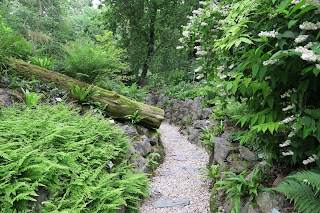 Today's plan was to visit Wuppertal. Well, more precisely the 120 year old Wuppertal Suspension Railway. We parked in a pay and display car park near the south west Vohwinkel terminus, and caught the train for a round trip to the other end just over eight miles away. One of the surprising things about this railway is that it just forms part of the area's public transport network and uses a standard area ticket to travel on it. The ticket also meant we could jump on the S-Bahn from the north eastern terminus to the next station to play a set of four Wherigos we'd noticed.

Anyway, the Suspended Railway straddles the river for most of the route but actually follows the street for a couple of miles at the south-western end. Fascinating stuff! 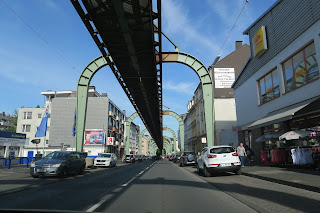 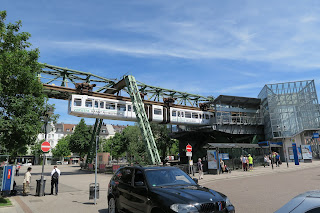 We rounded the day off with the Welcome Meet and greet event for tomorrow's Giga event.

Up bright and early and made our way to the Giga event venue. This was an old coal mine/coking plant which, in its day, was the most advanced in the world. OK, I don't like to complain but this Giga was the least 'foreigner friendly' so far. The web page was in three languages but at the event everything was just in German including the lab caches. The lab caches themselves were a bit obscure and even  the Germans were baffled by a lot of them.

Anyway, there was a great atmosphere and we bumped into Stompy & Stampy, our caching friends from Cornwall and we joined forces to do the lab caches and it was good to have a chat and stuff.  Later on we bumped into Amaya Tom, Spooky Luke and Cornish Candy - always good to bump into friends at mega events. 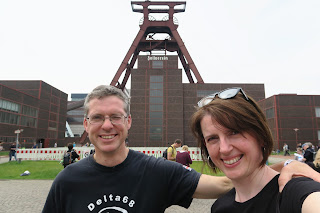 Many of the buildings on the site had been put to new use but maintaining the original workings inside. One such building was the Red Dot Design museum which we visited and spent a good couple of hours or so marvelling at the 'best of the best' design items on display.


Day 9 - Cologne
Checked out of our apartment, returned to the Giga venue for the goodbye event and the ten new lab caches and then headed to Cologne for a  bit of sight-seeing.  We'd visited Cologne on a previous visit to Germany but never been to the Cathedral before.  Then it was time to head to the airport for our flight back home - which was delayed by 1½ hours as they couldn't find the plane...........


We had such a fun week, making memories. It was lovely to spend time in some of the cities we hadn't been to before.  We now have just 2 German states left to visit out of the 16....