This walk has been on our to-do list since we saw it on Julia Bradbury's Walks with a View earlier in the year.  We are keen to explore more of the Yorkshire Dales now we're living only a stone's throw away and as the forecast looked dry for today we decided to go for it.

We have recently bought a camper van so this was our first trip out in it, just out for the day to give it a test run. 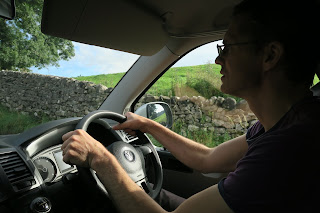 We arrived in Malham at 8.30 and parked easily for free at the side of the road.  We were really glad we'd made an early start as the Malham Show was also taking place today and the area was already getting quite busy.


We set off towards Janet's Foss along the well marked and signposted  path.  Before long we entered a wooded ravine, this part of the walk was simply magical, so peaceful and picturesque. 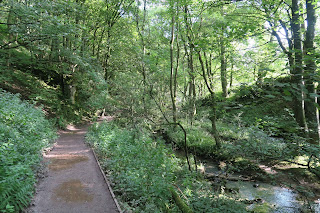 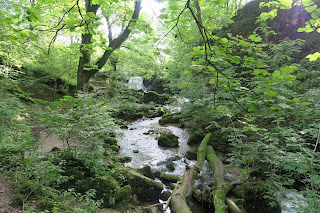 We were soon at Janet's Foss waterfall.  The name Janet (or Jennet) is believed to refer to a fairy queen who is said to inhabit a cave at the rear of the waterfall.  Foss is a Nordic word for waterfall and in England has translated to 'force' in many waterfalls. 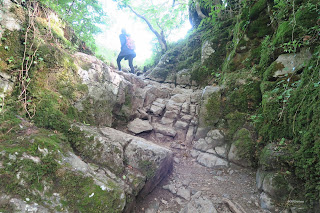 We then continued along the path, out of the ravine and on to Gordale Scar.

As we rounded the corner nothing could have prepared us for the breathtaking sight of the scar!  The sheer height of the rock was mind-blowing.  We had initially planned to scramble up through the scar as had other walkers that joined us at the bottom but out of a group of about 15 of us there was only 1 person who was prepared to scramble up the slippery rocks, the rest decided to turn back and take a detour.  This was disappointing but we decided on balance that this was the best thing to do as there had been a lot of rain over the last few days and in these conditions it would probably have been foolish to attempt it.  So we back-tracked and took the detour, this added a couple of miles onto the route. 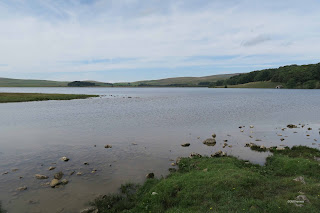 Before long we found ourselves at Malham Tarn, at 377 metres above sea level it is England's highest freshwater lake.  Malham Tarn featured on the news a couple of weeks ago as the National Trust have released 100 water vole into the lake.  They are England's fastest declining mammal and it is hoped that the animals will recolonise the tarn and its surrounding streams - fingers crossed! 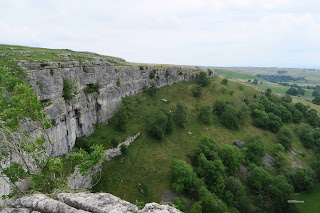 The limestone pavement was simply amazing, really enjoyed walking around and exploring at the top of the cove.  The sheer drop over the edge was a little scary though and getting close to it made me feel a little uneasy as I could see the 250 ft drop below.

Then it was down the many steps to the bottom where we could take a closer look at the cove and find the answers to the earthcache.
Malham Cove was in the news at the end of last year, for the first time in living memory Storm Desmond caused water to flow over the cliff here.  See news item here.


Then it was only a short walk back to Malham itself where we popped in to the visitor centre before heading back to the camper for a brew.   The village was now quite crowded with visitors to the show and there was also a running race taking place. 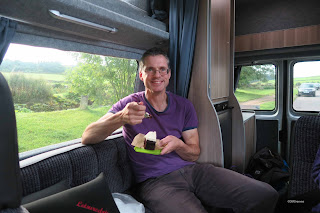 This walk is definitely one of my favourites of all time, it was just the right length of walk at 10 miles and had so much interest at every turn also there were only a handful of caches to find which suited me fine, not too much stopping and starting and more time to look at the scenery.  Fantastic and highly recommended.

Looking forward to more adventures in the campervan.

It's been a busy few weeks, what with attending Piratemania, Geolympix and the North Wales Mega so despite the forecast being for cloud with possible rain most of the day we decided we were ready to bag a few Wainwrights and even better, our daughter Beth wanted to come along.

As we set off from Cow Bridge Car Park I wasn't in the best of moods, I'd had a 'challenging' week at work and a late night last night and when the alarm went off at 5am it was a bit of a struggle to get up to say the least, I really could've done with another hour or so.  It's funny though because as we started our walk I thought how rubbish my week had been with one thing and another and as we started the ascent up towards the summit of Hartsop Dodd in the strong wind and rain I had a bit of a tearful moment as I mulled things over and I considered going back down but after a big hug off my lovely daughter and a bit of a talking to I decided to carry on with the walk and there's the funny thing, by the time I arrived at the first summit and bagged our first Wainwright of the day I felt so much better, it was like a weight had lifted and I decided that in actual fact the week hadn't been that bad after all, just challenging really.  So when people ask me why I love walking so much well that's why, I find it uplifting and the best cure for stress.


Anyway enough of all that and on with the walk.

Here's an overview of the route:


A gentle ascent up the north ridge to the summit of Hartsop Dodd which is marked by a stick by the wall, not very impressive but it marks the highest point of the fell.

Visibility was quite poor as the cloud was very low but the forecast had promised it would clear up by mid-day so we were hopeful of some good views before the end of the walk.

That was our first Wainwright of the day in the bag. 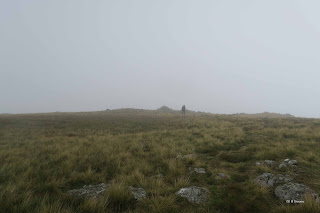 As we continued to Stony Cove Pike there weren't really any views to be had as the cloud was so low and we could barely see the summit cairn as we approached but the walk itself was easy enough. 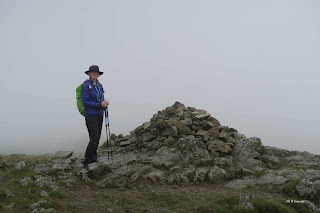 Once at the summit we took a very short detour to the geocache (1 of only 2 on the walk).  That was Wainwright #2 of the day.  We didn't hang around long here as the visibility was poor and getting worse.  Then it was onward to Thornthwaite Crag. 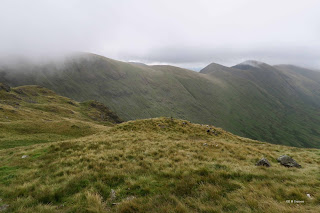 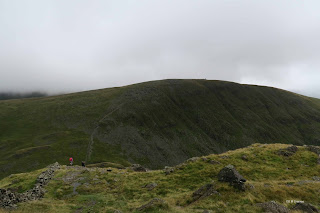 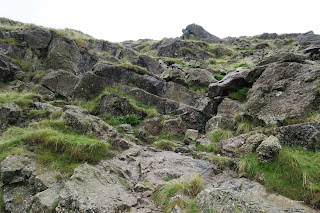 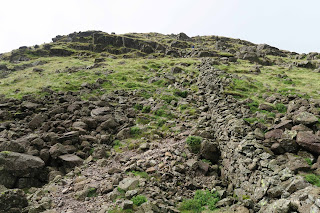 The path down was a tricky scramble on wet rock.  I really wasn't prepared for how difficult this was and at times felt out of my depth due to not being able to get a good foothold on the slippery rock but we took it slowly and eventually made it to Threshthwaite mouth unscathed. 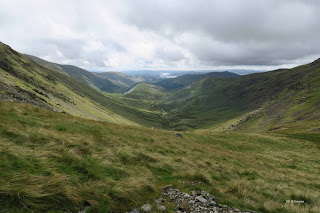 Then after a brief cuppa we started the very steep ascent up the scree path on Thornthwaite crag.  This looked a lot worse than it actually was.  It was very steep but easy enough and I was glad we were walking up rather than coming down that way. 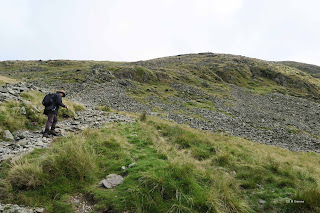 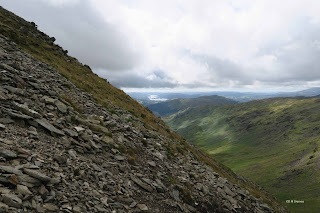 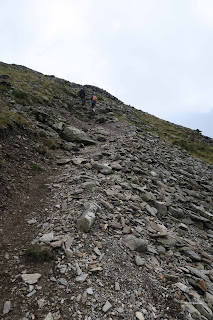 The summit is marked by a very impressive 14ft cairn named Thornthwaite Beacon.  This was Wainwright #3. 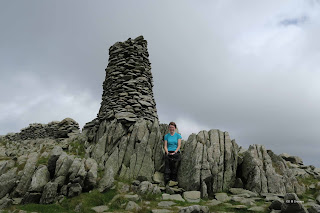 After this we continued along to Grey Crag.  This section was like a walk in the park and we soon arrived at Grey Crag summit cairn.

After this the descent back down to Hartsop was straightforward and we were soon back on flat ground and back to the car. 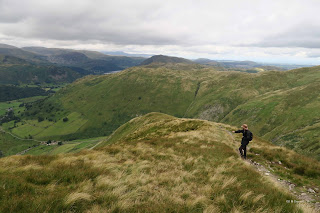 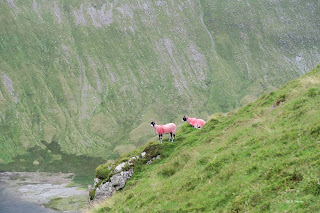 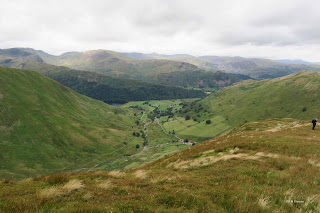 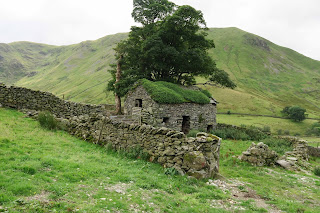 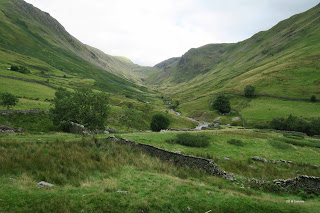 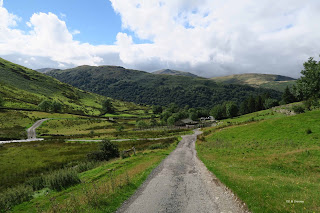 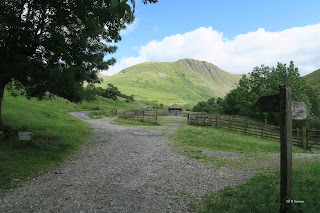 The walk was just under 9 miles long, thoroughly enjoyable.

Then it was off to Ambleside for pasties from the Apple Pie Bakery.