Today we headed over the Pennines to view a flat with our daughter and spent the rest of the day mooching about in Sheffield - I love going to Sheffield, so many great places to visit and a trip wouldn't be complete without stopping off at the Unwrapped Shop to fill up our empty jars and containers. 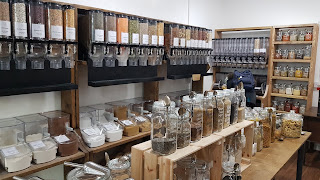 The peanut butter machine is so much fun to use! 😍

It would be great if we had a a zero waste shop on our doorstep.

We stayed overnight in Castleton in our usual spot ready for a walk the next morning. 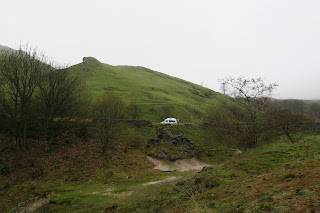 A bit drizzly first thing but it soon cleared up and we set off on our walk.

We parked at Edale Station to do the BL series which is a short series of 14 caches on a 4 mile loop.  The first cache of the series is very close to the start of the Pennine Way. 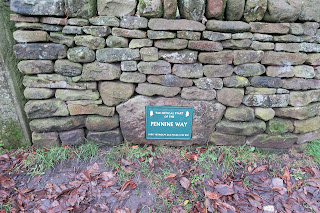 The Pennine Way National Trail is a 268 mile (429 Km) walking route from Edale in Derbyshire to Kirk Yetholm in the Scottish Borders. It was the very first National Trail and opened on 24th April 1965.  It's a trail I have always wanted to do, we have walked bits of it over the years but to set off and complete the whole trail would be amazing. 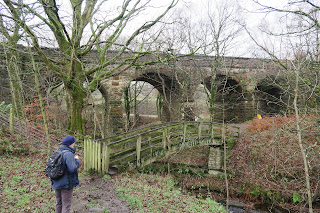 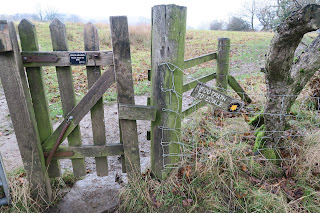 Including stopping for lunch and dawdling for muggle walkers and generally enjoying the scenery the walk took us 3hrs 19mins but we weren't in a hurry so if you were pushed for time you could easily do it much faster. 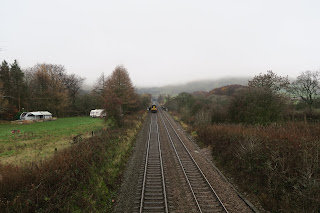 One of the caches, Oh Noe Not Again, required wading in the River Noe so we decided to go back for that one at the end of the walk with our wellies.  We were able to park right next to it, the water was quite fast flowing but it was great fun.


We rounded off the day with a few Church Micros and a multi from 2006 called In Search of Thomas - sadly we didn't find Thomas because by the time we got to GZ it was dark and the leaf fall was heavy so after a long search we had to admit defeat, we'll have to return in daylight to find that one.  Sometimes it's fun finding caches in the dark but the one thing I miss is seeing the scenery, not long to wait now until the nights start drawing out again 😀

Autumnal Weekend in The Lakes

We haven't managed to get up to The Lakes anywhere near as much as we'd liked to have done this year, in fact the last time was June!  So when we saw how good the forecast was for this weekend and we had no other plans, the Lakes was our obvious choice and hopefully bag a couple of Wainwrights too,

We have bagged 101 Wainwrights to date.  In 2010 we did our first one but at that time we weren't really aware of the challenge so we officially started the challenge in 2016 when we moved to the North West.  That year we bagged 53, then 2017 we managed 36 and this year we've done 11.

Saturday morning the plan was to hike to Harter Fell (649m).  Harter Fell is a mountain in the western part of the Lake District.  There are several routes to the summit but we decided to walk from the Birks Bridge car park in the Duddon Valley.
The route to the car park involves negotiating the tricky Wrynose Pass (393m).  Wrynose Pass is a mountain pass between the Duddon Valley and Little Langdale and is one of the steepest roads in England.  We have driven this route a few times now and once in icy conditions which was pretty hair-raising.

We had a leisurely start to our walk with coffee and cake in the van before setting off in the autumn sunshine. 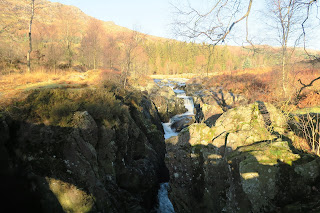 Looking back at The Birks - an old working farmhouse.  The property was owned by the Forestry Commission and occupied by a tenant farmer until the early 60s but is now owned by the Grove School in Shropshire and utilised as a field studies centre.

The first part of the walk was really boggy underfoot then after this section the path becomes very steep with loose rocks, tree stumps and bare roots.  We stopped regularly to take in the amazing views. 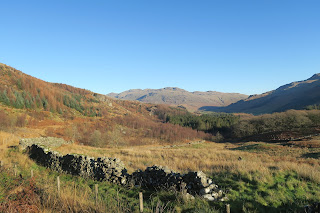 Autumn walks on sunny days are by far my favourite.  I love the contrast of the blue skies and the autumn colours. 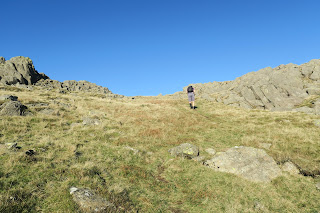 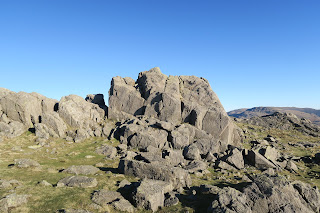 It was just under two miles to the summit which consists of three distinct rocky tors. 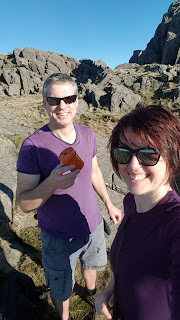 We found the cache then it was a bit of a scramble to get up to the highest point which is the true summit.

There's also a trigpoint which isn't the highest point, luckily we'd read this in our A.W. guide book before we set off.

The views were stunning and we spent ages admiring them.   The Duddon estuary and Morecambe Bay could be clearly seen to the south and to the west we could just make out the Isle of Man. 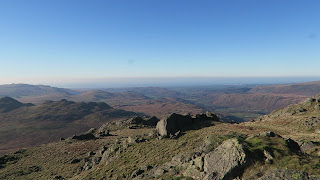 After eating our packed lunch and sitting enjoying the views and sunshine we headed back down again.

A truly enjoyable walk on a beautiful autumn day.

After this we sat in the campervan relaxing with a cup of tea and I read my book for a bit then we decided to make a start on the new virtual in Buttermere.  You need to visit five waypoints so we thought we'd try and tick a few of them off over the weekend. 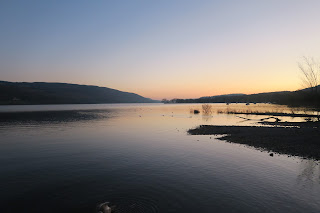 Later on, we were driving down the lanes in an area between Coniston Water and Windermere when we spotted something rather large at the side of the road in the headlights, we slowed right down and saw what we thought was a very large pig, but then we soon realised this was no ordinary pig it was actually a wild boar!  We'd never seen one in the wild before so this was an amazing sight to see. 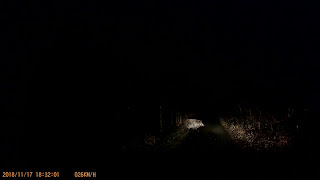 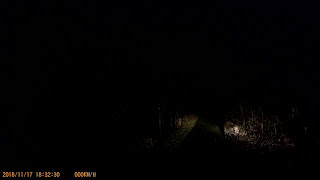 The dash-cam picked it up very nicely.

This came straight after seeing a beautiful barn own perched on the hedge, unfortunately the dash-cam didn't pick this up as it was too dark.

After this we headed in to Ambleside for a few supplies.  When we arrived we'd just missed the town Christmas light switch-on so the place was looking really festive. 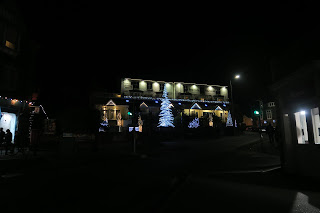 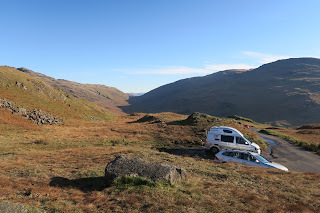 Today we drove along Hard Knott pass and parked in the very small parking area for the walk up to Hard Knott summit (549m).  It was a bitterly cold wind today but luckily the sun was still shining so that helped keep the temperature up a bit. 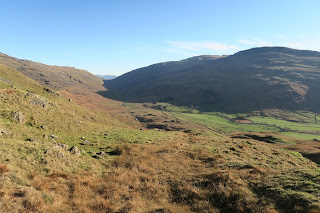 It was a very straightforward walk from the parking to the summmit, the route isn't particularly well trodden and in areas it's quite boggy so its a case of picking the driest route.  Once again stunning scenery as the skies were so clear.

There is a cache to find at the top which we is always a bonus when Wainwright bagging. 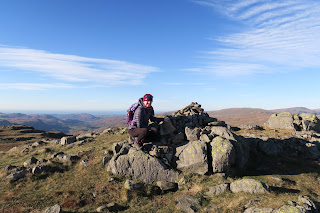 We didn't hang around long at the top so once we'd admired the views and found the cache we headed back down to the parking. 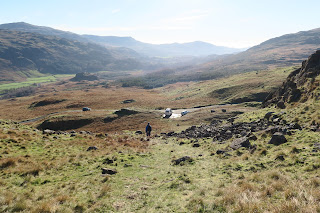 The weekend was over far too quickly, we've had a fab time, hopefully we'll be back up to the Lakes again very soon.