The Hills were Calling...

We've been itching to get back up to the Lakes to bag some more Wainwrights, the last time we got up there was 3 months ago when we did a snowy walk to Raven Crag.  Since then weekends have either been too wet,  too snowy or we've just had other commitments.  We could go up in inclement weather but we prefer dry days with good views so we try to plan our trips around the weather.  On Monday the weather forecasters were threatening that this week we'd be having a 'heatwave' so we were just hoping that it would last until the weekend, with bated breath we waited and watched the forecast and yes it did look like it would be a clear day and the sun would be out on Saturday - whoo hoooo!  Time to get planning.  We had a few ideas in mind but we've been wanting to do Helvellyn ever since we can remember and long before we started this Wainwright bagging lark.  We've been holding off as our son and daughter had asked us to wait until we could all go together but as they both live away from home then it's hard to get us all together.  They particularly want to do the Striding Edge route so we thought we'd pick a route that didn't take in Striding Edge and bag a couple of other Wainwrights on a different route.

We drove up on Friday night so we could make an early start.

Saturday morning we drove to Wythburn and parked up at 07:00 near the church, made a quick cuppa then set off at about 07:45.  We'd been on a walk from here earlier in the year so had been along this path before, there's been quite a bit of damage to the fencing from fallen trees since our last visit. 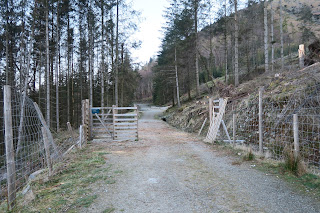 A bit of a chilly start but we soon warmed up.  Lovely and quiet along this stretch, not a soul around... apart from a few cute Herdys.

We made good time, only stopping on the way to admire the amazing views, take off a layer and apply suncream. 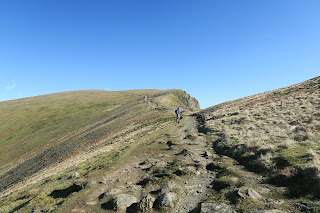 The summit is remarkably flat, so flat in fact that Bert Hinkler landed a small biplane there in 1926.  There is a small memorial to this.
The Lake District National Park Authority employs two 'Fell Top Assessors', between the months of December and April, working alternate weeks, they walk up Helvellyn every day to check the weather conditions on the mountain and report their findings on their website and also on Twitter.  Can you imagine that?  What an amazing job

The views were simply stunning.  We spent ages admiring the scenery, taking photos and chatting to a few others we met, it was surprisingly quiet but as we looked out cross Striding Edge we could see a line of 'ants' forming across the top.  The route looks amazing and we can't wait to tackle it next time but looks like you'd need to be really early to miss the crowds on a clear day.

The mountain has claimed many victims over the years.  An early casualty of the mountain was the artist Charles Gough, he was visiting the Lake District in April 1805 and it was believed he fell from Striding Edge.  Three months later a shepherd heard a dog barking near Red Tarn on investigation found Gough's skeleton with his hat split in two which backed up the assumption that he had fallen.  Incredibly his dog Foxie was still at his side.  Newspapers initially reported that the dog had survived by eating the remains of her dead master but this was soon forgotten and the dog was rewarded for her attachment and fidelity to her long-dead master.   William Wordsworth and Sir Walter Scott both wrote poems about the tragedy and a memorial stone to Gough was erected on Helvellyn in 1890 and quotes part of Wordsworth's poem "Fidelity".


We sat in the summit shelter to have a bite to eat and a mug of tea before continuing on to Nethermost Pike, stopping regularly along the way, completely transfixed by the views and cloudless sky.


From here we contined to Dollywagon Pike, once again stopping along the way to admire the gorgeous views.  This was not a walk to be rushed on such a beautiful day.  The sun was hot but the wind was deceptively cold so I was putting my jacket on and off for most of the time along the ridge.

From Dollywagon Pike we dropped down to Grisedale Tarn.


We were out of the wind now and it was really getting hot in the sun.  We were heading towards a letterbox cache, it was set by THE SMILEYS, we love finding their caches as they are nearly always in interesting places and this one didn't disappoint.  On the way to it we could see a sign sticking up above the rocks so we were heading towards that to see what it said then realised this was near GZ. 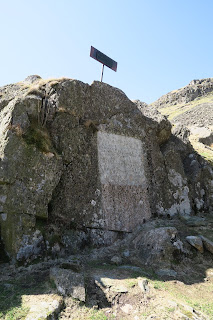 The sign marks the spot where William and Dorothy Wordsworth said goodby to their brother John on 29th September 1800.  Sadly, the Wordsworths never saw John again.  John was the Commander of the East Indiaman 'Earl of Abergavenny' when she sank off Portland on 5th February 1805.  More than 200 died, including John Wordsworth.  In June 1805 William and Dorothy visited this place again and William wrote the poem Elegaic Verses in memory of his brother.  The Wordsworth Society then arranged for some lines from the verses to be inscribed on the rock in 1882. Unfortunately, due to weathering the inscription can no longer be read but this is what it says:


Here did we stop; and here looked round
While each into himself descends,
For that last thought of parting Friends
That is not to be found.

Brother and friend, if verse of mine
Have power to make thy virtues known,
Here let a monumental Stone
Stand--sacred as a Shrine. 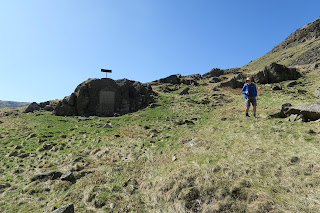 From here we walked around Grisedale Tarn and headed down Raise Beck where the going was quite slow as my knees were getting quite sore.  The cascades and waterfalls were beautiful along this stretch so it was a good excuse to stop and rest, turning back to look at them. 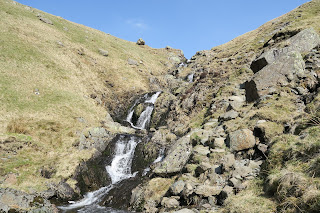 Finally we made it down the long mile stretch to Dunmail Raise.  Then it was more or less pretty flat and easy going then all the way back to Wythburn.

A fantastic walk in perfect weather.

Here's a very short video of our walk: