We'd both booked this week off work back in the summer but hadn't decided what to do with it, so we kept our eye on different deals and had a few ideas of places to go. We were also keen to go to a new caching country.  I've been to Spain many years ago but this was all in pre-caching days.

We spotted a fairly good deal flying to Girona in Spain and a work colleague had visited Roses in Spain many times and highly recommended it so we started looking into that area, it looked really nice with lots of caches to do in the area too.  So the flight was booked and hotel arranged.

Anyone looking at the Geocaching map would not fail to see a long trail of caches leading from El Port De la Selva in the North East down to Alcarras some 235 miles away! This is the CSJ series and follows the Catalonian Way of Saint James.  Anyway, we naturally thought we’d have a go at some of these and managed to bag a few although being a linear walk it meant a lot of back-tracking to move the car.

One of the things we'd planned to do this week was to hire some bikes and do the 'Aiguamolls Bike Ride' which is also known as the 'Granny Sue Route' a cycling series not far from Roses.  We weren't really sure how long the ride was but Mark had initially said that he thought it would be about 20 miles and that we should have just enough time to complete it in daylight but along the route we came across many flooded roads and paths after the recent heavy rain and found that we spent a lot of time struggling through flood water, muddy tracks or doubling back to pick up the route again so towards the end of the day we realised unless we cut out a large chunk of it we weren't going to finish. 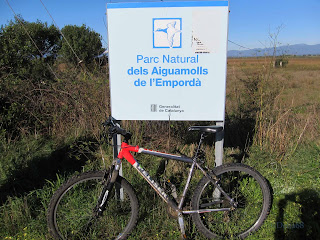 Part of the route took us through Empuriabrava, an area that is often referred to as the Venice of Spain because most of its residential area is built on and around a system of canals - 40km of waterways in total! The majority of the residencies have a private mooring at the end of the garden making it the largest residential marina in Europe.  There's also an airport which specialises in skydiving, restaurants, bars cafes boutiques and shopping centres.  We can only imagine how much it would cost to buy a property here.

Altogether we completed 26 miles - 4 miles of this was going to and from our hotel - but although hard going the route was fantastic and we had a lot of fun doing it and the scenery was just amazing. 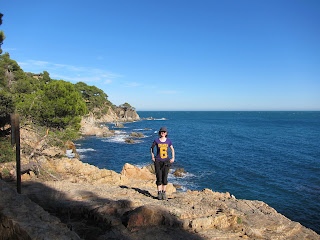 On the final day of our holiday we headed back towards Girona picking up a webcam cache on the way.  Luckily our caching friend Gaz_Zippy was able to help us out again with the screen grab - he must wonder where on earth we are going to ring him from next

Email ThisBlogThis!Share to TwitterShare to FacebookShare to Pinterest
Labels: caching by bike, Spain