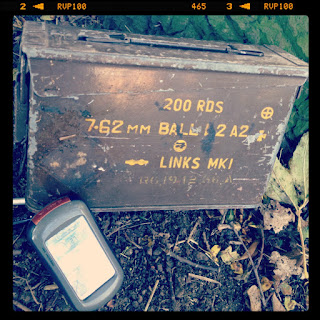 Halloween Hides and Creepy Caches plus others

We’d obviously decided long ago that we would be attending the Halloween Hides and Creepy Caches event having enjoyed last year’s ghoulish mayhem.  We started off the day by returning to the area east of Corby where we were last weekend to do some more izaakwilson’s ‘and Back’ caches.  We’d planned to do ‘Bulwick and Back’ followed by ’Glapthorn and Back’. We parked next to Bulwick #1 as suggested where there was another car already parked. The log in #1 confirmed that it was indeed another cacher – 37251. Our plan to do ‘Bulwick’ came to an abrupt halt here though as there were (once again) a group of pheasant shooters up ahead, so to avoid confrontation over which route we wanted to take we decided to backtrack a short way to do the Glapthorn series followed by the Bulwick loop in reverse in the hope that by the time we got round to the end of the walk the shoot would have finished or moved elsewhere.  We wondered if we'd bump into 37251 and we did by Bulwick#21 which was somewhat later than we’d expected but he told us he’d detoured for the Blatherwycke loop which we had done last week, we stopped for a good chat before continuing on the walk.  Always good to meet other cachers out and about.


A couple of places on the route involved walking through cows, they weren't any bother but it probably would've been a different story if we'd had our dogs with us.  They were very inquisitive but luckily we managed to shoo them away.  At one point we had to walk through a farmyard packed with cows that were being fed, a bit scary but luckily we could see a farmer nearby so we weren't overly concerned, they were a bit frisky with us being so close but we made it through unscathed. 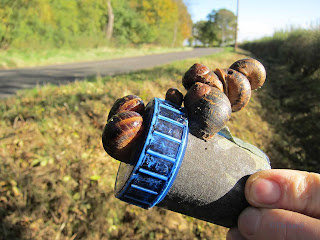 Although very windy today it was mostly dry and sunny apart from one short sharp hail shower towards the end of the walk.

We completed the two loops in  a little under 5 hours and walked 11.4 miles.  This included stopping for a chat with fellow cacher 37251 and stopping for our lunch part the way round. 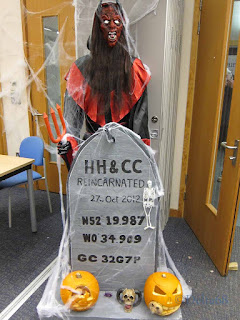 Now for the event!

We arrived at about 4 o’clock signed in and started on the ‘daytime’ caches. Really great fun bumping into all the other spooks and ghouls.  One particularly amusing moment was when we returned to the path after finding 'Twin Peaks' and scared the sweet b'jesus out of a Muggle dog walker as we were wearing our masks - she said 'I've seen some sights along this path but this just about takes the biscuit'

We completed the caches just as it was getting too dark to see (we’d left our torches in the car Doh!) 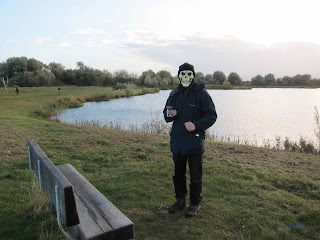 Then it was back to the visitor centre to catch up with other cachers and wait for the night caches to be handed out.

- I think he was secretly hoping we wouldn't turn up as so far we are both on the very short list of cachers who have attended all UK Mega events.

We teamed up with other cachers for these and enjoyed meeting lots of other cachers along the way.  We were even FTF on the Multi which was a nice surprise as we'd assumed it would have already been found!!

The amount of effort gone into setting up the event and all the caches must have been phenomenal a big thanks to everyone involved. 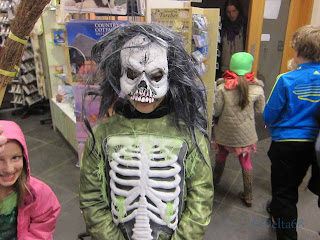