Caching in The Wrekin 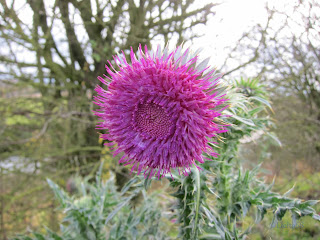 As per usual we'd been keeping our eye on the weather all week - not that it really makes any difference as we'll go out caching in all weathers - but the forecast for today was for heavy rain all day, it was only last night that the forecast changed to rain for the afternoon.  So we togged up for heavy rain and we were pleasantly surprised when the sun came out around midday and shone for the rest of the day! 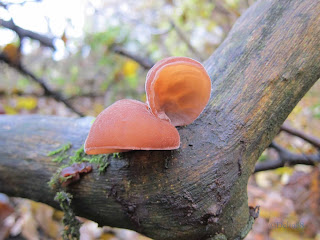 The first part of the walk from #1 to #10 was quite hard going through the woods with no obvious paths to follow but it wasn't really a problem as we just followed the arrow until we came to the next one but it did slow us right down and we began to wonder if we'd allowed enough time to complete the walk as we had to be back home in time to take Pegz to Stratford-upon-Avon as her band were due to play a gig in the evening.


At #17 we realised we were following Stag Ramblers - this really made us laugh because we bump into them or follow them on a trail so many times when miles from home - we hoped to bump into them later in the walk and when we got to #33 they'd signed the log with the time so we could see they were only an hour ahead.We texted them to let them know we were on their trail and they replied to say they were only a few caches ahead and had stopped for their lunch.  We thought we'd be able to catch up with them but.............

At #32 a sheepdog came running over to us just as we'd found the cache, it hung around until we'd replaced it and then proceeded to follow us through the field, it stayed with us for the next 3 caches - each time we tried to shoo it back the way it had come but in the end we just thought it would go home eventually. By the time we got to #37 it was clear that it wasn't going to go away as it kept running off to other people - even chasing a car down a lane - but always coming back to us (very obedient

) so we decided to ring the number. on the collar; at this point we learnt that the dog was called Molly. As we'd suspected, the dog had come from the farm near where we'd first seen it and the owner was very grateful that we'd called and said he'd come and meet us.  We looked around for something to secure the dog as we thought it would be just our luck that the owner would arrive and the dog would disappear - luckily we found some bailer twine to use as a makeshift lead and we backtracked through the wood and out to the lane where we waited for Molly's owner to arrive...........  So all this faffing around had delayed us by about ½ an hour so we decided to stop for our lunch as Stag Ramblers would probably be too far ahead of us now to catch them up........... 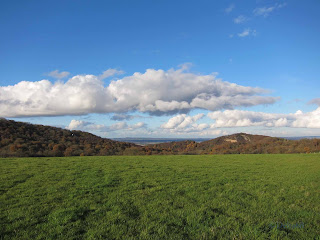 Really enjoyed the walk, great scenery, mostly good paths (apart from the bit at the start and the end) and all easy to find (apart from one) caches.  One thing we did keep saying to each other as we found the caches was how on earth had the COs managed to lug all the caches around with them!!!  If you do the series you'll see what we mean

All together the walk took us 6½ hours.