A little break from Wainwright bagging for a few weeks as we have other plans.

We visited Scarborough and Filey a few weeks ago and ran out of time to do some of the caches on our to-do list, so made a mental note to have another trip out to Yorkshire in the near future.   This weekend seemed like a good a time as any for another visit.

We set off early afternoon on Friday. The plan being to go up to Dalby Forest area to do some virtuals and stopping off on the way to various other bits and bobs.

The nights have drawn in really quickly and the sun had set by 17.30.  The clocks go back tomorrow so it will be darker even earlier from then. 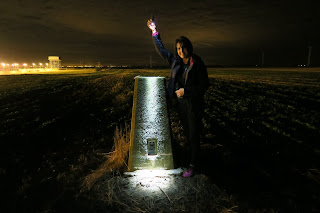 This meant that by the time we reached Withernsea it was already dark.   I'd spotted a trigpoint on the map which was next to the gas terminal in Easington, it was only a short walk from the road so we parked up and off we went.  There's a funny story though, when we got home I looked it up on TrigpointingUK to log it and read some of the previous logs, one of the logs mentioned they'd given it a miss due to Police patrolling the area and another said they returned to their car to find armed Police checking their car over.  Good job I hadn't read these beforehand as we probably would've given it a miss, especially as we went in the dark- here's a photo of me not giving a monkey's with the high security floodlit gas terminal (behind 3 rows of barbed wire fences and CCTV at every post) to the left of the picture.  It's all good fun. 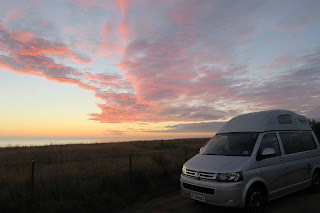 We were up before sunrise ready to head to the first cache of the day, Prime Meridian North {East Yorks} from September 2001.  We'd decided against doing it in the dark last night as we wanted to be able to see the coastal erosion, we'd visited a different part of Spurn Head last time and the effects of the erosion are quite dramatic.

The best things about having the camper van is the sense of freedom, the peace and quiet, making a brew whenever we feel like it, waking up to a fantastic sunrise and going to bed watching a wonderful sunset.  We have found so many times that when we try to book accommodation it's either too far away from where we want to be or ridiculously expensive when all we want is just somewhere to sleep with none of the extras that you end up paying for a don't need or use.  It really is brilliant..... 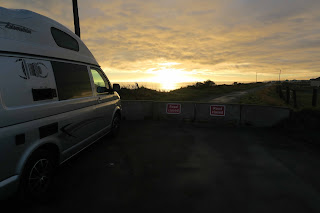 Next stop Dalby Forest.  We last visited Dalby Forest on a family holiday in 2004 so it was good to come back again.  We had great fun doing a couple of virtuals, Holy Cow and Bridestone.  A lovely autumnal walk in the forest. 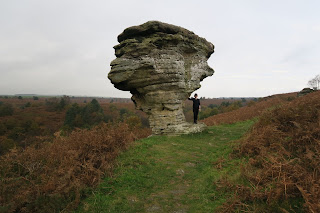 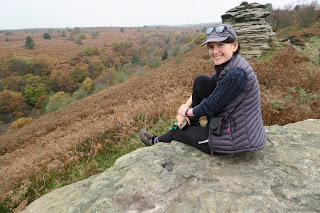 The next virtual on our to-do list was Trainspotting Folly.  The description on the listing makes us smile, it says the cache is only a virtual due to snow causing problems with finding a good hide and if anyone wishes to upgrade to a physical cache then the CO will happily archive! Strange to think of this now, virtuals are seen as something special as they are so rare.

We arrived about 20  mins before sunset so wondered whether to leave it until tomorrow morning but we as we were heading up to Whitby tomorrow we were keen to fit it in this evening if possible to give us more time in Whitby.  From where we parked it was about a mile to GZ and we made it about a minute before sunset.  This has now gone to the top of my favourite virtuals, absolutely loved the location, so peaceful, we didn't see another soul. 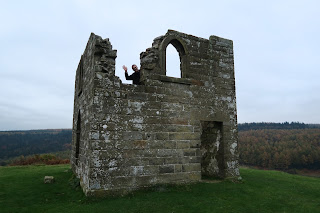 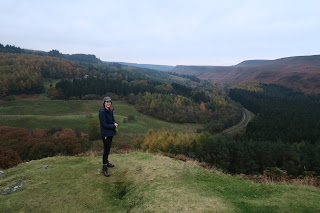 By the time we got back to the camper it was dark and we headed off to Whitby ready for more fun and games tomorrow. 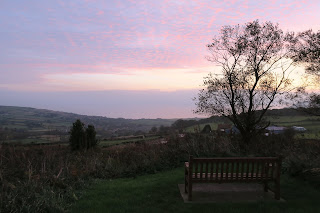 The clocks went back this morning and this is the first time I’ve ever forgotten all about it, I was about to cook our breakfast and thought I had an hour until sunrise – as I was keen to take a photo of the sun coming up over Robin Hoods Bay – anyway I noticed the sun was already coming up then it dawned on us both at the same time that it was because the clocks had gone back.  Seemed really strange how much lighter it was this morning compared to the same time yesterday morning.  Inside the house it's something you hardly notice really. 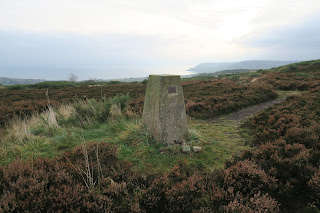 We weren’t far from a YOSM so after our breakfast we enjoyed a short walk over the moors to bag the trigpoint there.

We hadn’t been to Robin Hoods Bay before.  It’s somewhere I’ve been aware of for quite some time, ever since I heard about Wainwright’s coast to coast walk.  The Coast to Coast walk is a 192 mile route from St Bees in Cumbria to Robin Hoods Bay in North Yorkshire. It's a walk that I would love to do one day. 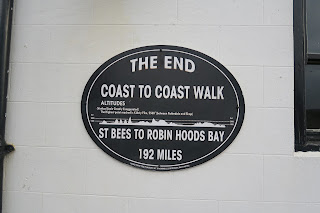 It was fun exploring the little streets of Robin Hoods Bay and when I stood at the sign where the walk finishes I imagined for a moment what a lovely feeling that would be to complete such a walk. 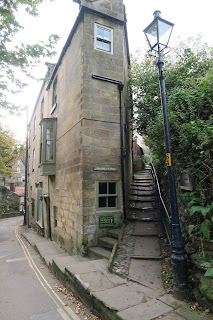 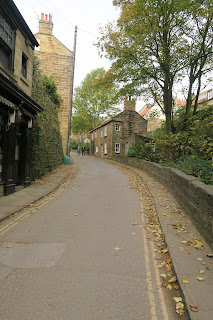 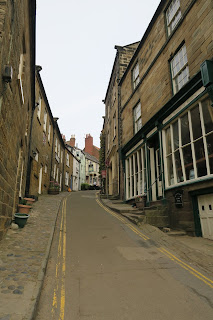 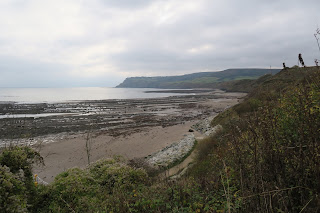 Next on the list was a few virtuals.  These are my favourite kind of cache and it will be a shame when there are no more in the UK for us to find. The first one was Bram Stoker's Whitby cache this was in a really cool location overlooking Whitby. Then it was Heinkel 111 and Filmset 10 Harry Potter. 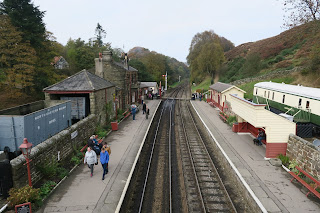 This place has been on my to-do list for such a long time and it was fantastic to finally visit as I love anything to do with Harry Potter. 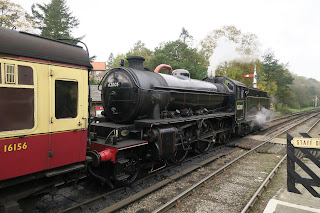 While we were in the area we were really keen to find the LQ  for North Yorkshire, really great to tick this one off finally and it was such a coincidence that our caching friends Stillroaming from the Isle of Man had also visited today!  It would’ve been so lovely to have bumped into them. 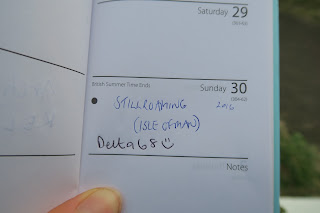 Then it was time to head home... so much more to see in the area and I'm sure we'll be back again before too long.