We’d been hoping to get back up to The Lakes this weekend but after studying the weather map all week it looked like it was going to be pretty wet there. Wales was looking pretty good – yes you heard that right - Wales!  There were actually a few sun symbols on the map for Saturday.

We’ve been wanting to visit Anglesey for a long time now but we just never seem to get round to it, it's a bit closer now we've moved and much easier to get to for a weekend away.
Friday afternoon we set off to Anglesey, stopping off in Colywn Bay for supplies on the way. The main problem going away this time of year is lack of daylight, by the time we arrived in Colywn Bay it was already dark.
We had been recommended a good spot to stay overnight at Penmon Point and arrived at about 6.30pm, stopping off to find a cache at Beaumaris Castle to fill in the cache for the day.

We weren’t sure what to expect when we woke up as it was dark when we arrived but the view of Puffin Island from the camper van was absolutely amazing! 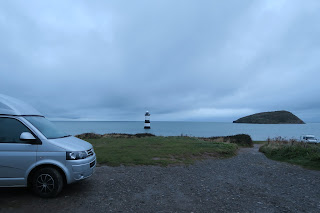 After breakfast we had a wander round and found the Earthcaches there before moving on. 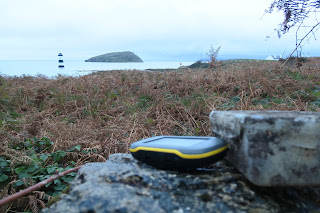 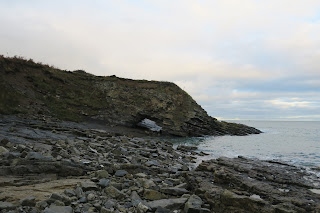 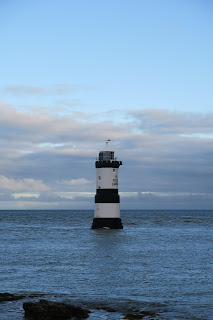 Then it was off to Holyhead Mountain, which was the main reason for our visit.
The sun shone all day and it was hard to believe it was the middle of November as the temperature was so mild.

After stopping off for a couple of caches on the way we eventually arrived at the visitor centre for Holyhead Mountain.

From here it took us only 40 mins to get up to the trigpoint at the summit, we spent ages admiring the view and taking photos before searching for the old cache. 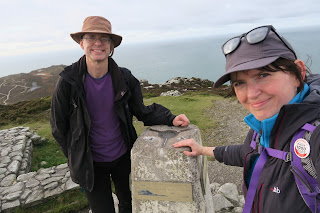 It took us a little while to locate the cache and we found it after a bit of scrambling.  It was great to find such an old cache, this one was set in September 2001.

There was some interesting information back at the visitor centre about the lighthouse and the breakwater. 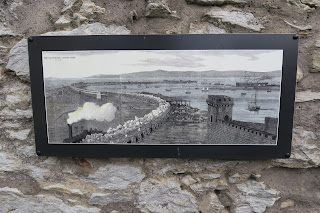 We learnt that the Victorian breakwater was the longest in the country at 1.7 miles long. Work began on the breakwater in 1845. Up to 1,300 men were employed during the project, sadly more than forty lost their lives. The breakwater, which took 28 years to complete, was officially opened on 19 August 1873 by Albert Edward, Prince of Wales.

We would’ve stayed longer but we were in a race against time with the daylight and wanted to find another cache before it got dark.  The location was at a house where they’ve been filming recently for the next series of Safe House on ITV .  Known locally as The Haunted House on the Hill. The original series was filmed in the Lake District but the new series has been filmed in Cheshire and Anglesey – so look out for it if you watch it.

We just managed to fit in another old cache before heading off to our camping spot for the night.

It's my birthday today, opened my lovely birthday cards and presents before going out for a walk along the coast path.

Our walk took us along Red Wharf Bay until we came to a concrete topped Sea Wall Path. 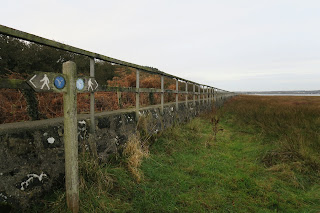 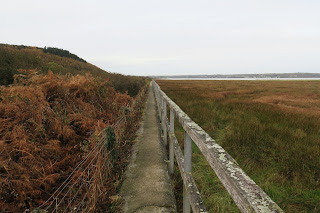 The wall was about 500m long and had a sturdy fence on the seaward side.  The beach was really marshy and would be hard-going trying to walk across it without the wall in place.

Then it was back to the camper and on with the rest of the day.


A place I've always wanted to stop off at is Llanfairpwllgwyngyllgogerychwyrndrobwllllantysiliogogogoch - which means 'St Mary's Church in the hollow of the white hazel near to the rapid whirlpool of Llantysilio of the red cave.  It's probably one of the earliest examples of a publicity stunt - apparently the name was contrived in the 1860s purely to increase tourism.  It is the longest place name in Europe and the second longest official one-word place name in the world.  I have to admit to feeling a little underwhelmed by the whole experience though, not sure why. 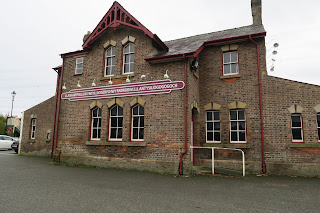 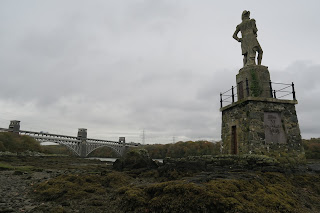 Then we left Anglesey and headed across the Britannia Bridge in search of the old lions. 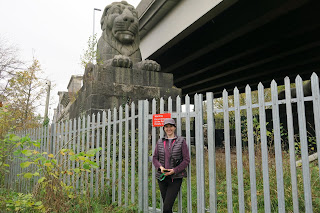 Britannia Bridge was originally built as a railway bridge but following a devastating fire in 1970 the bridge was rebuilt as a two-tier road and rail bridge, the bridge was officially re-opened 10 years later in 1980.  This meant that the original lions that stand at each corner of the bridge could no longer be seen and are not at all visible from the A55 above, hundreds of people must pass them every day completely unaware of their existence. 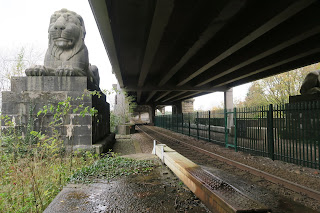 From time to time there are local campaigns to get the lions raised but I think it's unlikely due to the cost involved.  I think it's such a shame now though that they are hidden from view, they really are an amazing sight.  Some interesting old news clips here 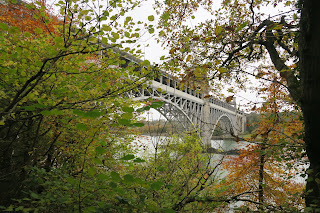 It was almost time to head home but as we were so close we decided to take a detour to Caernarfon Castle to see the Weeping Windows poppy display.  We went to The Tower of London 2 years ago to see the Poppy display so as soon as I heard about this one in Wales I was hoping we'd have chance to visit. 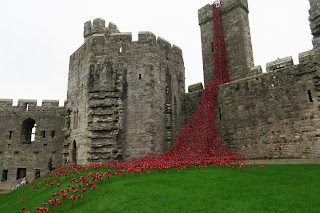 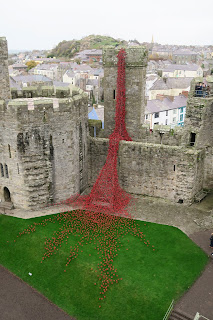 That was about all we could fit into our weekend, will definitely be going back to Anglesey as we really loved it there.  A fun birthday weekend.
Posted by Donna and Mark at 15:00

Email ThisBlogThis!Share to TwitterShare to FacebookShare to Pinterest
Labels: Anglesey