Early Autumn Weekend in the Lakes (this is becoming a habit)

Can’t believe it’s the 1st of October already!  Where is the year going?  We’ve been living in the North West for 6 months now and we’re feeling really settled now.  We’re really enjoying exploring our new area and having weekends away in the camper van in new places.

This weekend we’re back in the lakes to bag a few more Wainwrights.  We’re up to 35 so far and have 5 more planned for this weekend.

It was dark when we left the house at 6.15 this morning, can’t believe how quickly the days get shorter.  When we arrived in Grasmere it took us a while to find somewhere to park, there were no free options so we ended up in the pay and display car park.  So after faffing around with the parking and having a brew and some cake we were finally ready to set off on our planned walk at 8.15.

Today's plan was to bag 4 Wainwrights starting from Grasmere. 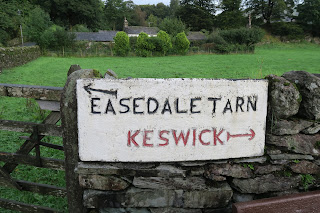 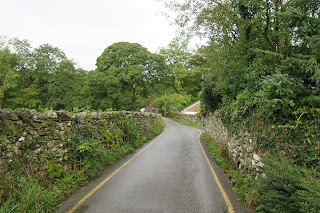 A couple of miles of road walking before we turned up the track to head up to Steel Fell.  Although the sun hadn't put in an appearance yet there was no wind and it was really mild so it wasn’t long before I was stripping off a couple of layers. 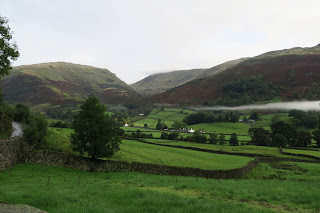 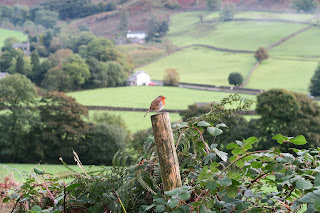 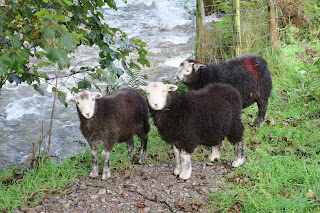 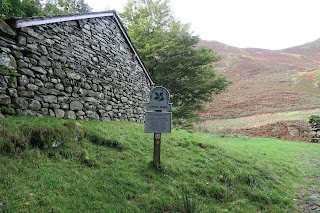 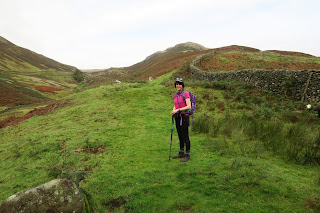 The route was a steady climb up the hill on a mainly grassy path.  Before long we reached what we thought was the summit but no it wasn’t to be, once we got to the top we realised we still had half a mile to go to the actual summit.

We caught up with a couple of walkers we’d seen up ahead of us and got chatting to them.  They’d come from Gretna in Scotland for the day about an hour up the road, really interesting talking to them as they had walked just about everywhere in the Lake District – it still weird to think that we live this close to the Scottish border too after living in the Midlands all our lives.... can't wait to explore more of Scotland in the near future.....  We continued on our way and went to find the summit cairn and our first Wainwright of the day.


The two walkers we had met warned us that the route between Steel Fell and Calf Crag would be extremely wet and boggy underfoot – they weren’t wrong!  This really tested our boots and then I remembered reading about this section of the walk in my Wainwright Pictorial guide it said ‘He who reaches Calf Crag with dry feet has cause to be satisfied with his boots'.  Safe to say I think I’ll be needing some new boots for the winter months.


This really gave our boots and good test and I realised that they actually have a split in them which is why they were letting in water – doh!  Can’t believe how many pairs of boots I’ve got through, I think I get through a pair every 12 months.  It’s not like I buy cheap boots either and I always clean and reproof them after each use.  Maybe that’s just normal for the life of a  walking boot, I suppose when you think of how many miles we walk each year on some some pretty heavy going terrain.

On the way we were treated to some fantastic views of Greenburn Bottom. 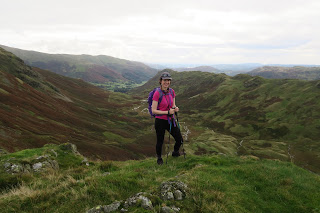 This was our 2nd Wainwright of the day.  We didn’t stay long here and moved swiftly on and along the well marked path towards Gibsons Knot.

After a very fast start and making really good time, once we reached Calf Crag we started to take our time and stopped often to admire the views and savour our surroundings, we really didn’t want this walk to finish.

There were a few other walkers there as we arrived and after a quick chat they were on their way and we were left alone to take our photos of the summit cairn and our 3rd Wainwright of the day. 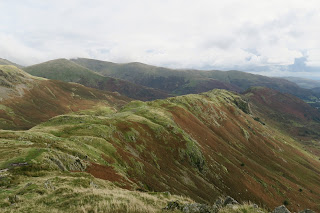 The views were simply stunning along this stretch and before long we reached the final Wainwright of this walk at Helm Crag. 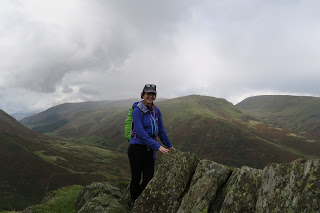 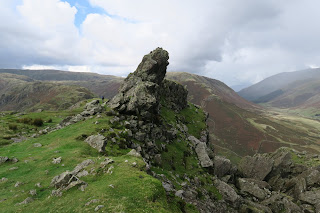 It was at this point it started to rain so on went the waterproofs.  It was only a short shower though thankfully and the sun was soon shining again.  The rock was quite prominent and was a little perilous to get up to the summit but worth it for the view.

Then we made our way back down to Grasmere, fabulous views all the way. 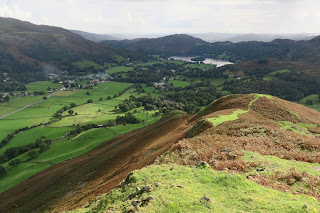 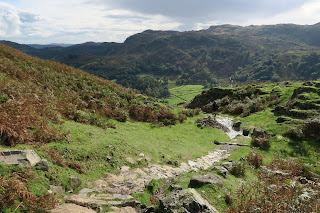 Altogether we walked 10.25 miles.  Then it was back to the camper for a brew.

After an  overnight stay in Ambleside we were ready for our 2nd walk of the weekend – Loughrigg Fell. 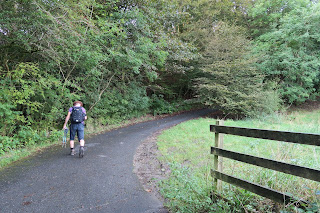 We set off after a hearty breakfast at 8am.  The forecast was for sun all day today so we set off in just T shirts.  The walk started from the bridge at Rothay Park, Ambleside and after a short walk up the road the route took us up a steep drive zigzagging up the fellside until eventually the road then became a path but still very easy underfoot albeit quite boggy and wet in places but as our boots were still wet from yesterday it didn’t really matter. 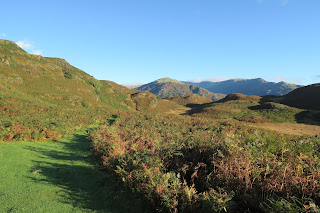 Before long we reached the summit and even better a trig point! 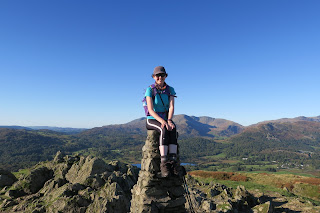 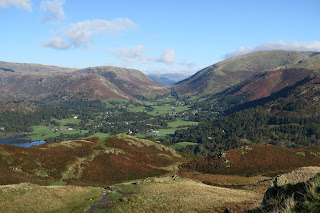 The views from the summit were simply stunning!  We enjoyed a brew here whilst we admired the views.

We were joined after about 10 mins buy a group of very loud men, they all seemed to be talking loudly at once which seemed a bit odd so we decided to press on quickly so they wouldn’t be following close behind and spoil the peace and quiet. 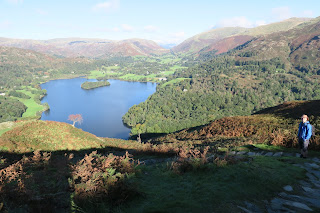 The views all the way down to Loughrigg Terrace of Grasmere were amazing, it would be worth coming back in a couple of weeks just to see the beautiful autumn leaves as they change colour and if you’ve never walked along here before I would highly recommend it. 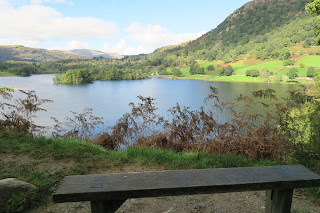 We continued along the path following the contour of the fell until we were overlooking Rydal Water, more stunning views. 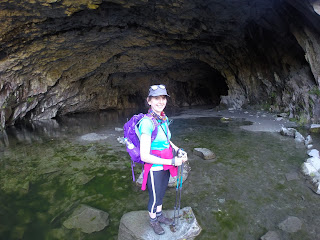 Eventually we came to Rydal Caves.  As expected it was quite busy here as it’s a fairly easy walk up to the caves from the car park and is a very popular route. 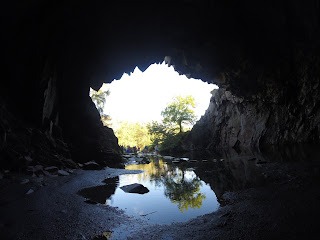 We explored inside the cave and looked for the answers to the Earthcache before continuing NE down the fellside and back down to the road that eventually took us back to the start at Rothay Park. 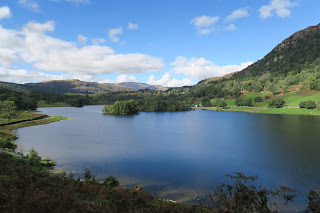 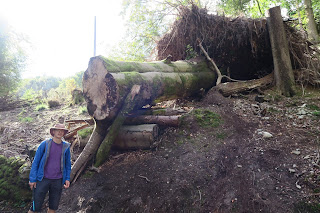 Here we detoured into Ambleside for a mooch about before heading back to the camper for... yes you guessed it ... a brew.


Once again another fab weekend, after a very stressful week at work I feel totally relaxed and chilled out after two fantastic walks.  It has to be said, fell walking truly is the best antidote to stress.