A Weekend in the Northern Fells


We'd been itching to get back to the Lakes as soon as possible but earlier in the week the forecast was looking pretty grim for the weekend so we started looking into alternative ideas.  Then as if by some miracle on Friday sun symbols starting appearing on the weather map for the Lake District.  So without further ado, as soon as I got in from work on Friday we planned which Wainwrights we were going to bag.  We decided to tick off a few in the Northern Fells area this weekend, starting with a walk on the Uldale Fells on Saturday.


We parked in small car park which was more like a layby near Over Water just outside Outhwaite to start our walk. 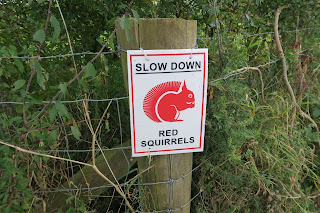 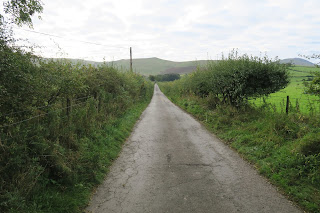 We had a fair bit of road walking to start with which was quite hard going in my new boots.  Yep, after last week’s very wet walk I decided my boots had seen better days and got myself a nice new pair, it’ll be a few walks before they feel like my boots though… anyway we were soon at the point where we needed to leave the road and start our walk up to our first Wainwright of the day. 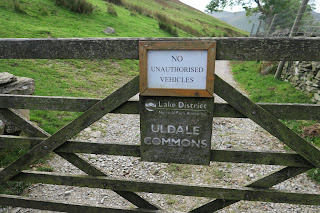 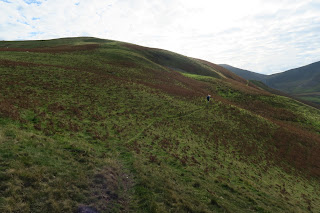 It was quite a steep ascent and after a chilly start we soon got warmed up. It was at this point I started to notice fresh cow pats.  So I called out to Mark, he called back and said he hadn’t noticed said cow pats (I bet!)  So we walked a bit further with me starting to lag behind.  Yet more cow pats and what was that?? A moo-ing in the distance?  So in a slightly more panicky voice I shouted out that I was starting to get worried about the cows.  In his usual laid back way Mark said 'It'll be fine just keep walking'.  Then I spotted the cows ahead on the footpath, definitely a large cow with a small calf plus a few of their mates.  No photos as by now I was ready to abandon the walk and run back the way we’d come.  It didn’t help that the landscape was pretty featureless, no walls or fences to jump over and no large rocks to cower near.   Mark somehow convinced me to head up to the ridge of Orthwaite Bank … he said something about cows only walking around the contours – yeah right!  Then as we were walking steeply up the fell side we saw said cows running along the footpath we’d just left, they were running towards a man and his dog, the man picked up his dog and froze, they weren’t happy at all so we continued up to the ridge and away from the cows, I was still panicking that they were going to come stampeding up behind us.  It's very rare we see cows on our trips to the Lakes usually just sheep. We carried on and eventually left the cows behind.  Panic and drama over. 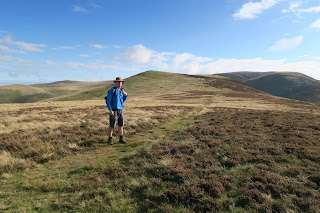 We continued on to Great Cockup which after the big build up with its name the cairn was a bit of a disappointment.

The man and his dog caught us up at this point and we enjoyed a chat about walking and Wainwright bagging before he continued on his way.  Great Cockup is the most Westerly of the Uldale Fells so from here you have unrestricted views across to the Solway Firth and Scotland, to the south you have a fantastic view of Skiddaw.

It was a steep descent and then ascent back up again to Meal Fell and after walking 3½ miles we found our first cache of the day which was hidden near the summit wall shelter.  This was also our second Wainwright of the day. 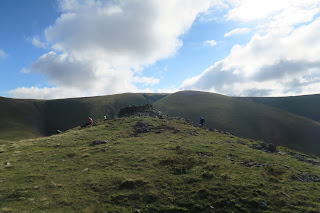 From here it was a half mile easy walk to Great Sca Fell and our third Wainwright of the day, we didn’t hang around too long as the wind was bitterly cold.  We were glad of the sun being out to keep us from being too cold.

From here we continued to Little Sca Fell where we ate our lunch in the wind shelter before continuing to Brae Fell (4th Wainwright of the day). 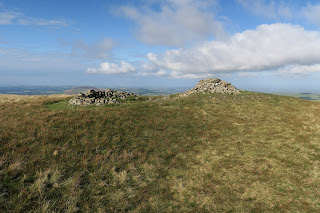 Brae Fell is the most northerly Wainwright – in Wainwright’s Pictorial Guide AW states ‘If all hills were like Brae Fell there would be far fewer fell walkers’.  Which it has to be said I kind of agree.  It hasn’t been my most favourite walk for interesting scenery but it certainly has been one of my favourite for peace and solitude as we've only met a handful of people, a far cry from some of the more popular routes where we often see dozens on sunny weekends. 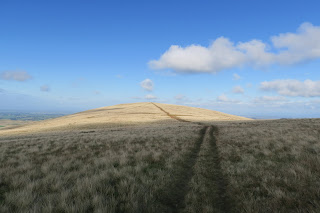 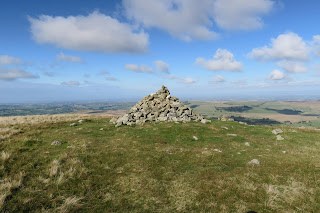 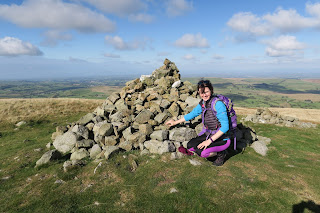 Just as we got to Longlands Fell we were joined by another couple, we enjoyed a lovely chat with them,  they were completing the Wainwrights for the third time and were just 13 off their goal.


We’ve met some lovely people while doing the Wainwrights, it’s great to stop and chat to people doing the same challenge.  After Longlands Fell we met another couple, they lived locally so had been just about everywhere in the Lake District, it was really interesting chatting to them too.  Then after Longlands Fell we descended down to the Cumbria Way which would take us back to the road and after about about a mile or so we were back at the camper van.


Although it started off a bit hairy with the cattle it turned out to be a fabulous walk, so peaceful and I felt totally chilled at the end of it.  Altogether we walked 8.5 miles and bagged 5 Wainwrights.

Back at the camper van it was time for a quick brew and as we had made such good time we decided to do the walk that we’d had planned for tomorrow. 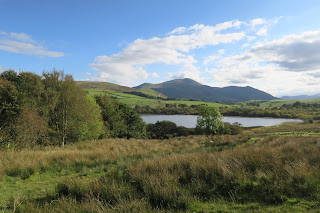 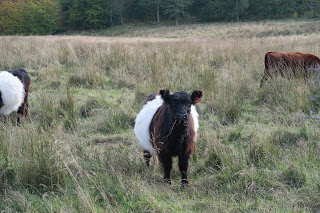 We could’ve parked closer to the start of the path for Binsey but decided to walk from where we’d parked the car at Over Water although once we’d reached the start of the path I did regret this decision as my heel was getting sore having been wearing new boots all day.  Anyway, onwards and upwards we’re here now so we may as well continue.  We took the route from Binsey Lodge to the summit which was about a mile up to the summit.  It was a gentle slog up a grassy slope until we reached the summit cairn shelter and trigpoint. 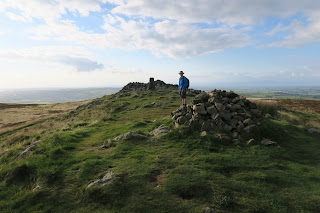 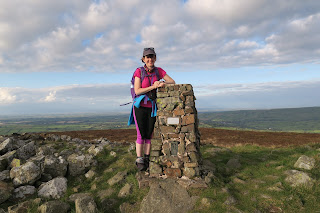 The views from here were simply stunning.  We sat for a while in the wind shelter, enjoyed a cuppa before heading back down again and back to the camper.  There and back walk 4½ miles.  Then we headed off to Derwent Water for the night.

There was a rescue helicopter circling overhead for quite some time, when we got home we checked out the Keswick Mountain Rescue website to find out more details. The incident is detailed here.  They do such an amazing job.


A beautiful start to the day and we thought we’d have a more leisurely day and take a walk up to Latrigg and bag another Wainwright.  We parked in the small car park which is already at 1000 ft elevation so it wasn’t too steep a walk up to the summit and as expected it was fairly busy there. There is no cairn here and the summit is pretty flat and featureless but the views from the summit are absolutely stunning across Keswick, Derwent Water and the surrounding mountains.  We spent quite some time here just relaxing and mulling things over and eyeing up Skiddaw for a future walk…. 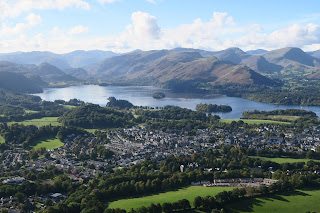 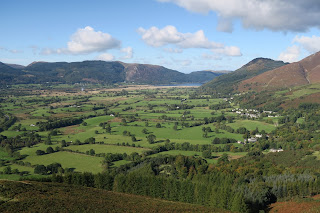 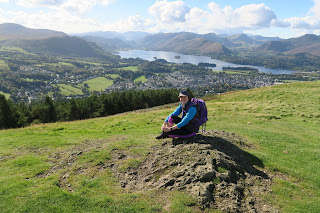 We really didn't want to think about going home, it's been such a relaxing weekend.  So to delay things a little longer we stopped off at The Bowder Stone as it's International Earthcache Day and you get a souvenir for logging an Earthcache today 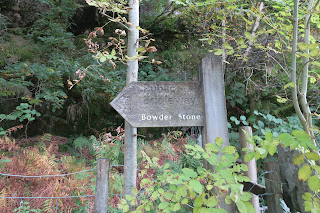 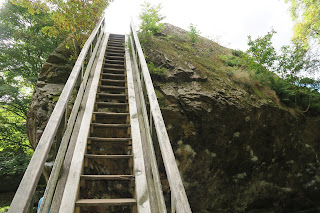 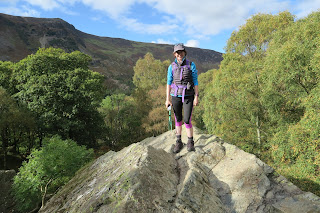 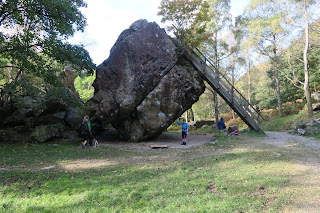