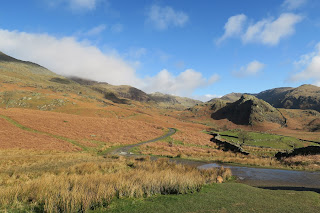 After what seemed like non-stop rain for two weeks we thought we'd check out the forecast for the weekend and saw a window of opportunity for Saturday - it was going to be sunny in the Lake District! So we checked and double-checked no there hadn't been a mistake the forecast really was for sunshine all day until late afternoon.  So we decided a break from decorating and unpacking boxes was in order and we'd have a day out and maybe tick of a couple of Wainwrights from the list.  Way back in 2002 we enjoyed a family holiday in Coniston and had wanted to walk up the Old Man of Coniston but the weather was really bad the whole week so we hadn't been able to, then back in 2014 we stopped off in Coniston after Piratemania and on our way to the Mega event in Scotland - this time we just didn't have enough time to walk up.  I have been banging on about it ever since so this seemed the obvious choice for today. 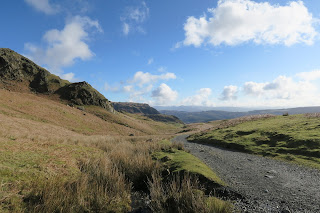 We drove up the very steep narrow lane from Coniston and parked in the car park on Walna Scar Road at 8.30am.  As it was quite early there were only a couple of other cars.  We set off and were soon stripping off layers as the sun was getting quite hot.  We made the steady ascent up finding Peak a Boo 1 - 5 on the way, these caches were great as it made finding the route much easier and was a good excuse to stop and admire the views on the way up. 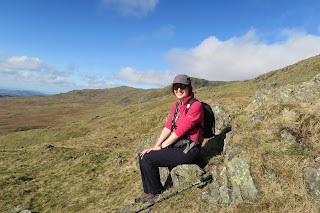 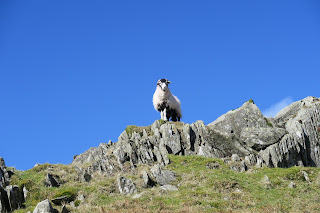 Once at the summit it was starting to get quite busy, it would seem that there are other more popular routes to the top.  The views were absolutely stunning and what luck that they weren't hidden in low cloud.  The sky was blue and the sun shone and we could see for miles around.

We found Coniston Old Man, admired the trigpoint (which is also a YOSM) and enjoyed tea and cake and a chat with a few other people. 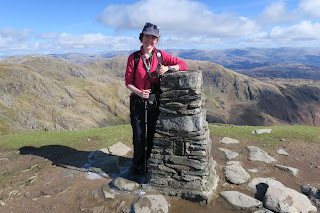 Mark overheard a group talking about Geocaching, it turned out one of the group knew all about caching as his mum was a keen cacher.  So after talking to them and assisting a few other people with photos we continued on our way. 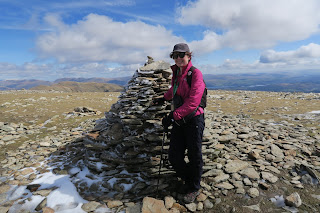 We walked along the easy ridge to Brim Fell, it was biting cold along here and very exposed, there was still some snow on the ground which the sun was working hard to thaw.  After bagging the summit of Brim Fell we descended in a South Westerly direction down the grassy slope with no obvious footpath until we picked up the more direct route from Old Man to Dow Crag which is clearly marked.  The ascent up to Dow Crag was rocky but nothing too tricky.

Then we continued along the ridge to Buck Pike and Brown Pike and down onto Walna Scar Road to for the long walk back to the car. 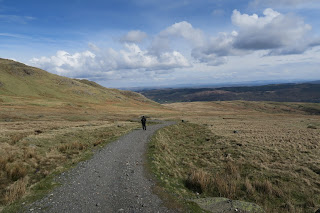 We were just about to take our boots off when we remembered we needed to go and find LQ:Cumbria.  So with tired legs we set off along the old miners road and soon found our way to the grass track that would take us up to 'The Bell'. 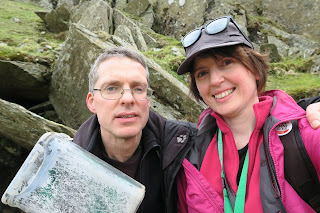 We enjoyed a fabulous 10 mile walk today and found 3 Wainwrights to tick off the list, an LQ, a YOSM and a handful of other caches.

Then it was back into Coniston for a chippy tea.  We were so lucky with the weather, just as we headed off home the heavens opened and the rain was torrential most of the way back.

Looking forward to our next trip to the Lakes.