For the past 13 years cachers have been hosting and attending Cache in Trash Out (CITO) events, normally they are held over one weekend but this year it has been extended to two weeks to give more Geocachers the chance to take part - the dates are April 16 – 24 and September 17 – 25, 2016.

We love a good CITO and have been wanting to set our own for a long time but have never got round to it, this year we decided to go for it.  We organised a litter pick in Buckshaw Village near Chorley called Binbags in Buckshaw.  When we published the event we had found an area with a fair bit of litter but some time during the last 2 weeks the litter had been removed.  It's great that the litter was cleared away but we were concerned there'd be nothing left for us to pick up.  We needn't have worried, once we started looking we managed to find a fair bit and after about 45 mins we all gathered back at the meeting place for post-CITO cake and a chat.

11 cachers were collecting litter altogether which is a good number considering it was so early on a Sunday morning. 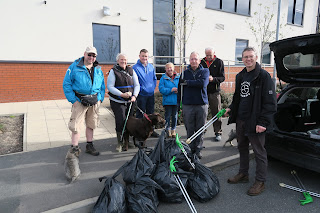 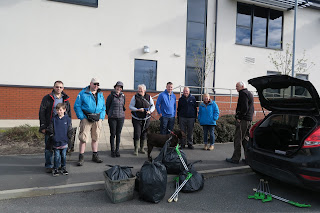 We had our fingers crossed that no one would come back with an old mattress or worse as we were taking the rubbish away ourselves - the largest item was an old recycling box that was found in the pond. 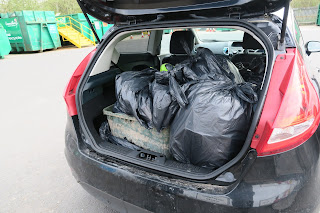 As there was only a car load we threw the bags into my car and took them to the local tip.

It was great fun and we'll definitely be setting more CITOs in the future.