Wherigoing in Warrington and a few virtuals 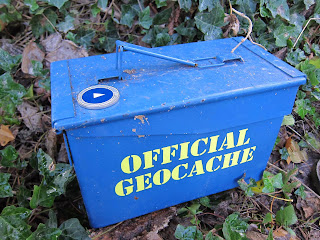 A day out oop North

We decided to spend a day finding our two favourite cache types - Wherigos and Virtuals in the Warrington area.

The weather was looking mixed but undeterred we headed up the M6 at 6am.  We were a bit concerned that Warrington might be heaving with Christmas shoppers but when we parked up at 8am all was quiet.

Warrington is a town in Cheshire, England. It stands on the banks of the River Mersey and is 18.5 miles  miles east of Liverpool, 16 miles west of Manchester and 8 miles south of St Helens. 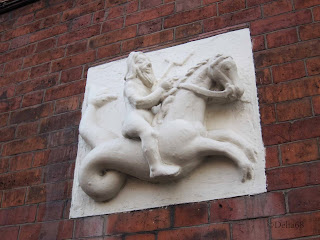 Our main reason for visiting Warrington today was to do Warrigo which we'd been looking forward to doing since it was published.

A thoroughly enjoyable Wherigo, all the stages were interesting and triggered easily. I played on my iPhone and Oregon 300 and Mark on his Samsung Galaxy S4 and Oregon 550.  Unfortunately my Oregon didn't want to play today and kept on crashing at the Old Post Office so I continued just with my Iphone which all worked beautifully.

We were able to do a bit of last minute Christmas shopping too which was very handy.

We'd only put a 2 hour ticket in the car park, hoping that this would be long enough but as we'd stopped for coffee and a bit of shopping half way round we realised at GZ that our 2 hours were up - doh!  A quick check on google maps and it was a 15 min walk back to the car - soon halved that as we ran all the way.

Then it was back in the car and off to Southport for a couple of virtuals - Trans Pennine Trail- Western End and Virtually on the beach.

I last visited Southport in the 80s on a high school trip to Pleasureland amusement park - the highlight of the trip being a visit to the Fun House and the low point was throwing up on one of the 'rides' to the sound of Kim Wilde's Kids in America, I've never been able to listen to that song since , yeah very nice, I used to suffer horribly from motion sickness as a child (in fact I still do), I couldn't go anywhere in the back of a car or on a coach without being sick and fairground rides were a no-go but to keep up with my friends I went on them.

Anyway, I digress .....Southport was hardly recognisable from my memory of the 80s trip, Pleasureland had had a bit of a revamp and there was a large retail park on the sea front including a large hotel.  The town was also extremely cycle friendly with cycle lanes and a cycle hire centre.  We had our trusty geo-bikes with us so it was great fun whizzing along the promenade. 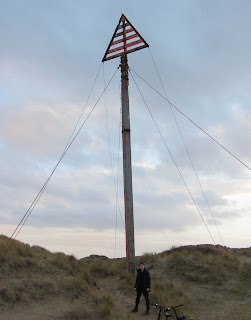 Then to round off the day it was back in the car and down to Formby to do the virtual Guiding Beacon.

We had great fun on the beach trying to find Intertidal Footprints, we searched until the sun went down and then got talking to a group of locals, one of them just happened to be a member of a local archeological group, she explained to us that the footprints weren't visible this time of year but she did explain where we should be looking if we were to come back in the future.  So this is definitely on our to-do list when next in the area.

So that was the end of a fantastic day of fun caching rounded off by a lovely meal at The Red Squirrel Harvester in Ince Blundell before heading home on our 130 mile journey.