A couple of months ago, whilst planning what to do over the Christmas break, we decided it would be fun to go on a short trip and find as many Virtuals and Wherigos as we could, we spotted a nice cluster in the Lincolnshire/South Yorkshire area .  We have always enjoyed finding Virtuals as it's something a bit different, they're quite rare and you just never know what you might find when you get there.  Also as they are no longer allowed to be published then the plan is to find them all - well at least in the UK anyway

We set off quite early from home on Friday morning and headed towards our first stop of the day which was Tom Thumb a virtual with a couple of stages in Tattershall, Lincolnshire.  We had fun looking around for Tom Thumb related items and exploring the church before heading off to our next stop.

A memorial wall depicting the breaching of the German dams in Operation Chastise, otherwise known as the 'Dam Busters' raid.  It is dedicated to the memory of those from 617 Squadron.

A very moving and poignant memorial.

We enjoyed a walk up and down the high street, what a lovely place, would like to spend a bit more time having a look around here in the future.

Next stop was Only The Good, a virtual in Walesby, Lincolnshire.  It's set at All Saints church at the top of a hill, it's a Ramblers Church which is on the Viking way, a long distance footpath running 147 miles between the Humber Bridge in North Lincolnshire and Oakham in Rutland. 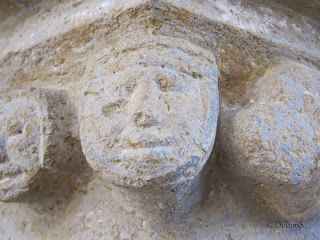 What an interesting place, spent ages looking around the church - rather amusingly someone had written in the visitor book that it was a shame the church was no longer used and that it should be 'brought back to life!' there was a reply beneath this setting them straight, commenting that the church is very much in use! 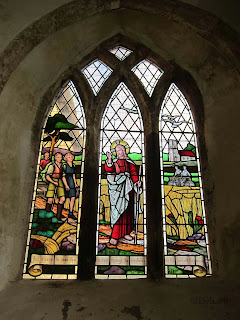 Next stop Wheriwalk around Caistor - a really fun wherigo set in the small town of Caistor, Lincolnshire.  All the stages worked perfectly and took us to places of interest around the town.  We stopped to have a look around the church of St Peter and St Paul before continuing with the Wherigo.  Rather interestingly it mentioned that this small town of population 2600 used to have 29 public houses - now only 1 remains!

Next on the list was Crash Landing - a Wherigo around Cleethorpes Country Park in NE Lincolnshire.  This took us around a lake where we had to find parts of spaceship.  It was quite exposed here and very windy, we had a job staying upright.  All stages were found easily and cache found after a short search in between many muggle dog walkers.  Before heading back to the car we did Cleethorpes Country Park Earthcache and then it was off to do a few challenge caches, we'd planned to do quite a few more in this series but we completely ran out of time.

A nice early start after a good breakfast at our hotel, then it was over the Humber Toll Bridge to the first virtual of the day Going in Deep. 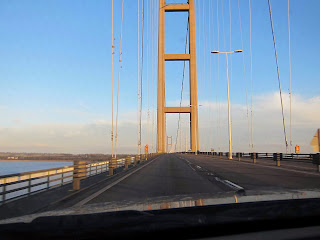 The second visit was to another virtual Prime Medidian Again - just a quick stop by the side of the road then on our way again. 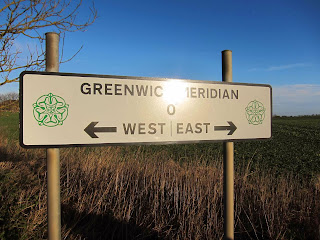 Next stop, Oi! Can anyone hear a Zeppelin? Which is a virtual set near Spurn Head - It's an acoustic mirror which was a forerunner to radar, they were built on the south and north east coasts of England between about 1916 and the 1930s. The ‘listening ears’ were intended to provide early warning of incoming enemy aeroplanes and airships about to attack coastal towns. With the development of faster aircraft the sound mirrors became less useful, as an aircraft would be within sight by the time it had been located, and radar finally rendered the mirrors obsolete. 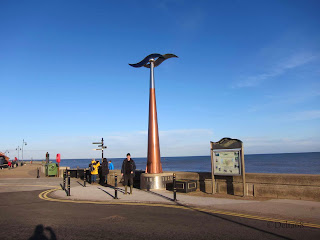 Then a quick stop in Seaton to find a virtual - Sign of Old times before heading off 87 miles towards Bradford to another Wherigo - A Neolithic Geocaching Adventure - We were just hoping we'd left enough time before it got too dark.  Just as we reached the first stage a friendly face appeared - it was UK Reviewer Castagnari - it was really good to meet him and put a face to a name, enjoyed a chat before continuing on our way.  The Wherigo was really great fun, all stages worked perfectly and one of the stages was timed and involved racing up to the top of the hill - Great fun!  We were rewarded wtih a YOSM/trigpoint at the top. 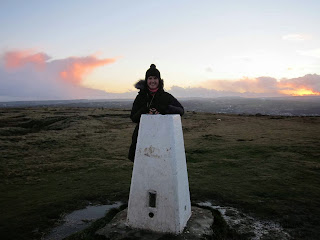 After this we headed to the nearest Toby Carvery for a slap up meal before going into Leeds city centre to do the Leeds web-cam cache.  This was fun as we had to hang around by the Town Hall waiting for the page to refresh, this only happened every 5 mins, the first time the picture was just too dark so we had to reposition until we could be seen in the picture, must've looked very odd to anyone watching but hey-ho we're used to it now

I noticed there was a church micro nearby so we decided to see if we could find that one, it was a straightforward multi so no problem.  I really like finding Church Micros - must make time to find more in 2014!

We couldn't make a very early start this morning as breakfast wasn't served until 8am!  So the first visit of the day was to When???, a quick virtual in a layby - we noted down the necessary details then we were on our way again.  Next stop - a wherigo in Kippax just outside Leeds called Lost Cachers in Billy Woods - This was an enjoyable stroll around Townclose Nature Reserve, the weather was sunny and dry and all worked perfectly on the smartphones - once again we found the Oregons did not want to play. 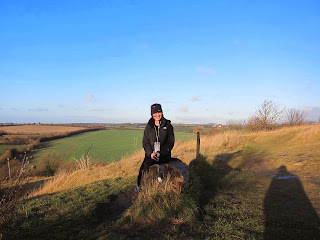 The next virtual Tiles in the Wood was a real gem.  This is what I love about virtuals, you just never know what you are going to find.  This was a complete surprise, on our way along the track we were trying to imagine what we'd find and we certainly weren't prepared for this - sorry no spoilers here - just go and find it!

Last but not least on our list was the virtual A Moravian Walk - This virtual takes you on a walk through Fulneck Moravian Settlement, which is a village in Pudsey just outside Leeds West Yorkshire. It was established in 1744 and is named after Fulneck (Fulnek), the German name of a town in Northern Moravia, Czech Republic.  A really interesting walk and once again somewhere we'd never heard of before geocaching brought us here.

Well that brings me to the end of the blog for this trip, a very brief account of what we crammed into the 3 days.