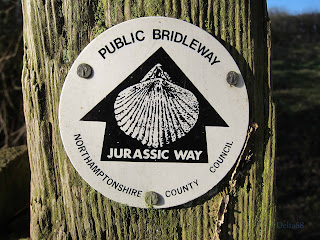 We hadn't planned on caching today but as we woke to a lovely crisp morning we decided to make the most of it and drove over to do this series near Cold Ashby, a village just below the start of the A14 in Northamptonshire.

As we pulled up at #1 we spotted a familiar car, it was TAG and Lime Candy, not sure what time they set off but hopefully we might bump into them later on.  Just as we were setting off Mr Wizz and Walk on the Wildside appeared too!

The walk follows part of the Jurassic Way.  We first became familiar with this path when we started caching as we remember doing some walks along the same path in Oxfordshire.  The Jurassic Way is an 88 mile long-distance footpath which connects the Oxfordshire town of Banbury to the Lincolnshire town of Stamford.

The Jurassic Jaunt series starts off on top of Honey Hill and the views on the way down are lovely, the route then goes out towards Winwick village via a 2 mile stretch of canal before heading back up Honey Hill.


We really enjoyed the walk which we'd highly recommend, all the caches were fairly easy to find although tweezers come in very handy for extracting some of the nano logs and we completed the series in 3 hours 15 mins.

After returning to the car we drove up the road to do the nearby YOSM at Cold Ashby trigpoint.  We were a little unsure about it as it wasn't on a footpath but no previous logs had mentioned that it was a problem and as the gate was open and there was a clear path to the trigpoint we decided to go for it.  As soon as we crouched down to take a photo and read the plaque an angry voice bellowed from across the field 'OI!!! GET OUT OF THERE!' we were really taken aback at the ferocity in his voice so I started heading straight back to the road, Mark was shouting to me 'hey what about the photo, take the photo!! (gotta get your priorities right) and we could see the farmer legging it towards us, in a race against time I stopped, turned around to take the photo then legged it to the car and we drove away

No idea what his problem was, Mark was insisting we stand our ground as we weren't doing anything wrong but I didn't want to hang around to find out .... anyway once we'd got home I started reading up on it and rather interestingly (for anyone interested in trigpointing that is) this was actually the first trig pillar ever used back in 1936.

Here are a couple of links for anyone that's interested : Mapping the history of Ordnance Survey's trig points and Happy Birthday to the trig pillar

Then it was back home to sausage hotpot in the slow cooker yum yum.........

Why are the weekends over so quickly?

Email ThisBlogThis!Share to TwitterShare to FacebookShare to Pinterest
Labels: Northamptonshire