The UK weather report at the beginning of the week said that this weekend was going to be hotter than Ibiza.... hmm found it hard to believe but decided to get a walk planned ready for Saturday anyway just in case.

We decided it would be a perfect day to head off to the Lake District again for a bit of Wainwright bagging and maybe a cache or two.  Today's chosen walk was in the Western Fells area. We are really enjoying being closer to Cumbria and love how we now have easy access to the Lake District.  Every cloud and all that.....

After a rather winding route we eventually arrived at the parking spot which was a grassy verge in Greendale, just to the West of Wast Water. 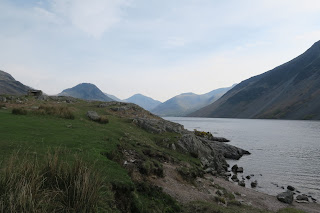 It's owned by the National Trust and is England's largest lake at almost 3 miles long and more than a third of a mile wide and is also England's deepest lake at nearly 260ft.

There is said to be a gnome garden at the bottom of the lake, the gnomes have been there for quite a few years.  After several deaths in the lake they were removed as it was thought they posed a risk for divers that went looking for them and got out of their depth but they were soon replaced and it is thought they are still there today.  Apparently many dive sites around the world have gnome gardens.  I'm not in a hurry to go and check on them though.

Back to Greendale... we set off up the road and walked for about 0.8 mile before leaving the road and taking the path at Gill Beck.  The path wasn't very well defined but we headed steadily up towards the summit of Buckbarrow.  This was a little steeper than I was expecting and even though it was early the heat of the sun was quite intense and before long I was sweltering.  I was a little concerned as it wasn't like I could peel off any extra layers as we were already only in T-shirts.  We're just not used to this heat, it's been so cold for so long the sunshine has come as a bit of a shock.  I stopped a couple of times on my way up to check the map (ok to get my breath back) and soon found our way to Buckbarrow, our first Wainwright of the day - brilliant!


Then we headed North towards the cairn on Glade How.  Glade How is actually listed as Birkett on the Hill Bagging website.

From here we headed to the cairn on Cat Bields where we could clearly see the path up to Seatallan almost a mile away. 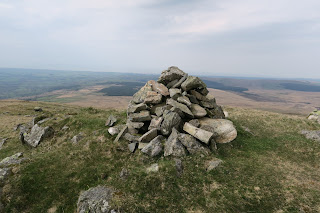 It was a bit of a slog but a steady climb which wasn't too gruelling, just a bit boggy underfoot in places.

The temperature had dropped and the wind got up at this point so this helped cool us down.

It was good to finally reach the trigpoint and bag another Wainwright.  Fabulous views from the top, we could clearly see Sellafield and the Irish Sea coast.  We found the nearby Seatallan cache and then sat in the shelter to eat our cake - this was one of 2 caches that we found on the 7 mile walk.  The cache on Seatallan doesn't get many visitors, only 53 in 8 years... make that 54..... but the funny thing is when I came to log it I noticed that it'd had another visitor today and we feel sure we passed them on our way back to the car but didn't see any GPSrs but their log fits with the time we saw them - what a coincidence! 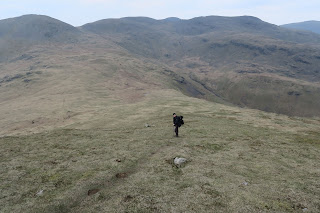 Then it was time to move on to our third and final Wainwright of the day - Middle Fell.  The route wasn't very clear but before long we found our way and steadily climbed up to the cairn where we spent quite some time admiring the fabulous views of Scafell Pike and Wast Water. 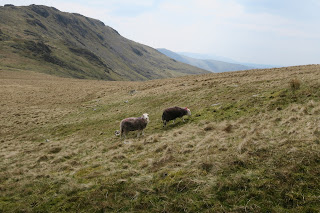 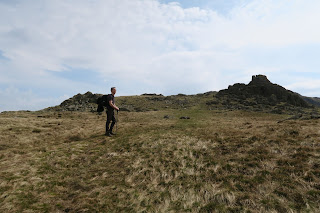 Then we started the steady descent down to the car.  The route then became a little busier and we passed a few people going in the opposite direction. 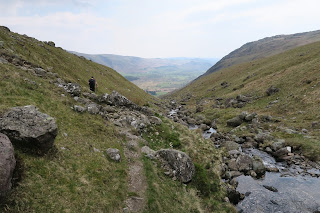 The path was very rocky so we carefully made our way along Greendale Gill until the path became a little easier and we could soon see the car.  We were glad that we'd had the mile long walk along the road at the beginning of the walk instead of the end.

All in all a brilliant walk, we bagged 3 Wainwrights, a trigpoint and 2 caches and walked a little over 7 miles.


We decided to spend the rest of the day in Ambleside which involved driving over Hardknott Pass!  For anyone not in the know... Hardknott Pass is the steepest road in England, a title it shares with Rosedale Bank in Yorkshire.

It's been 6 years since we last drove over Hardknott pass and I distinctly remember passing a car that had skidded off the road and was well and truly stuck so I have always been a little nervous of this road.

I took it steady and we stopped off half way to look for a cache we'd DNFd 6 years ago - found it straight away this time doh!  We were in my Fiesta today so I wasn't sure how it would fare but I just kept on going and made it over the pass thankfully without incident and my nerves intact.


It was good to finally reach Ambleside.  We had hoped to go inside the Bridge House but we were too late, so we ate our chippy tea on the bench next to it and it's a good excuse to return to Ambleside another day when it's open.

We've been so lucky with the weather today, the atmosphere in Ambleside was buzzing as everyone was relaxing and enjoying themselves in this long awaited sunny weather.  Let's hope it lasts...........

Now where shall we go next weekend?