I can't believe another week has gone by!  I wish I knew where the time has gone.  It's just under  two months now since we moved up to Lancashire and we started this crazy Wainwright bagging challenge.

Mark surprised me with a lovely present the other day, a full set of Alfred Wainwright's Pictorial Guides to the Lakeland Fells!  I was thrilled to bits as I have wanted a set of these for a long time.  Fabulous little books, I love all the little intricate drawings and walk descriptions. 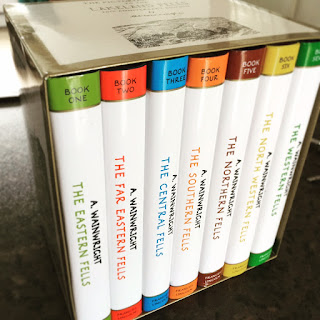 So here we are again with another planned walk to bag a Wainwright or two.

The forecast for Saturday didn't look too great, pretty wet in fact and as we had a few DIY jobs we needed to get done we decided to plan our walk for Sunday instead as the forecast was for sun all day.

The plan was to bag two Wainwrights in the Western Fells - Haystacks and Fleetwith Pike.

Haystacks was A.W.'s favourite fell and through his Pictorial Guide he requested his ashes be scattered there.

We parked up at the Pay and Display car park at Gatesgarth Farm, we'd read that the price changes there regularly so we thought we'd try there first before looking elsewhere.  We normally look out for the NT car parks but the closest one would've added an extra couple of miles onto the walk.  The charge at Gatesgarth Farm today was £4 so for a day of parking sounded fairly reasonable.

There are a few different routes you can take to the summit of Haystacks but as we were making a circular walk taking in Fleetwith Pike we decided to take the route from Gatesgarth.  After leaving the car park we headed towards Peggy's bridge.


An initial steep climb before the steady ascent up to Scarth Gap Pass.  This was quite rough underfoot but taking it steady we soon found our way, we stopped to chat to a man who was on his way down and this enabled us to have a bit of a breather before continuing on. 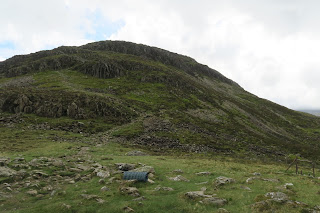 The route flattened out briefly before the steep ascent to Haystacks Summit. 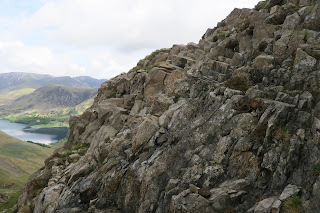 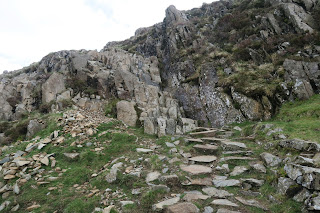 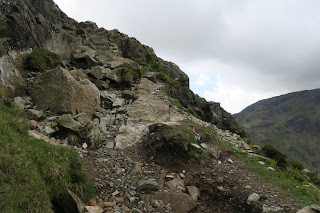 In places the the route wasn't very well defined so we picked our way carefully until we made our way to the summit. 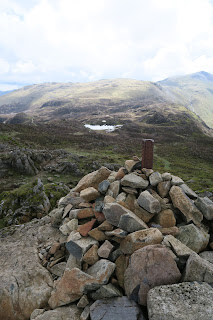 We were pleased to reach the top and were rewarded with some fine views.  There are two cairns at the summit, the two are at approximately the same elevation but the North one is usually reckoned to be the true summit.
We took the route southwards down from Haystacks towards Innominate Tarn and it was far easier than the ascent. The tarn is where where Alfred Wainwright's ashes were scattered. 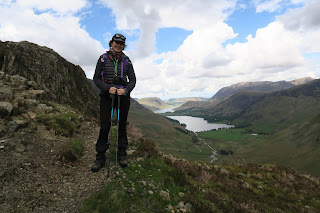 Continuing onwards towards Dubs Quarry and a bothy called Dubs Hut. We used to refer to our Labrador - Whisper - as Dubs so these names made us smile... especially an area on the OS map called Dubs Bottom! 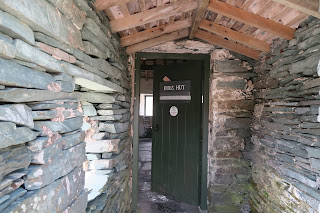 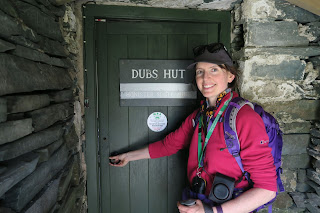 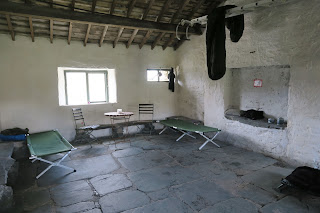 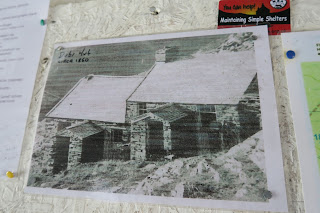 The route towards Fleetwith Pike was a bit unclear so we just headed in a Northerly direction until we picked up the more defined path running towards the summit.

The views from Fleetwith Pike are our new favourite.  A gorgeous view of Buttermere and the 'toy cars' on the road far below us.

The path downwards follows the ridge and I really wouldn't want to tackle this route in the ice or snow! 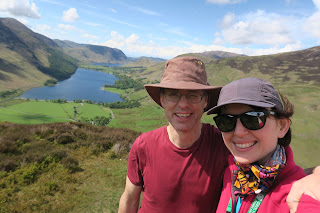 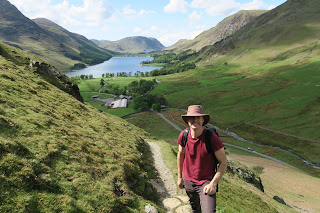 On the way down we passed Fanny Mercer's cross.  A very sad tale: Fanny was a young servant girl who worked for a school teacher in Rugby, she accompanied his family on a summer holiday in the Lakes in 1887.  They were descending down the steep ridge of Fleetwith Pike, she was not an experienced fell walker and tripped and fell, she was carried down on an old barn door as it was the days before mountain rescue, she was very badly injured and sadly died at Gatesgarth Farm before medical assistance could arrive.  Her body was returned to Rugby and a white cross erected in Buttermere in her memory.  To this day the cross stands as a warning to other walkers and a reminder of how perilous the mountains of the Lake District can be..... I'm glad I didn't read about that on the way up!

Then it was just a short walk along the road and we were back at the car again.


After that we paid a visit to St James' Church in Buttermere to see the A.W. memorial plaque. 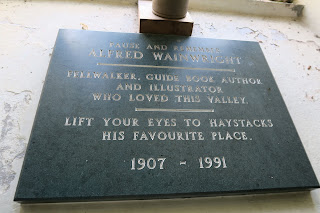 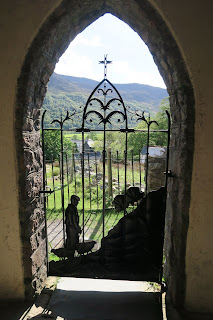 We had a mooch around the church and noticed a poignant memorial to a young RAF airman who was killed in the Second World War aged 22. This really emphasised to us the waste of young life and lost potential when you consider that A.W. didn't even visit The Lakes until he was 23 and how much influence he has had....

Anyway, on a lighter note, the end of another grand day out in the Lakes, we walked 7 miles, bagged two more Wainwrights (15/214) and found a handful of caches... it was one of those days that you never wanted to end .... looking forward to planning our next walk.