Our planned walk for today was the Langdale Pikes, a group of peaks on the North side of the Great Langdale Valley, about 8 miles West of Ambleside.


We set off on the walk at 08:45 and made our way to start of the footpath - following the obvious steep path alongside Stickle Ghyll all the way up until we reached Stickle Dam.
We turned right at the tarn and followed Bright Beck until we came to the steep path named by Wainright as North Rake.  This route avoids Jacks Rake which is a Grade 1 scramble and after reading a few articles about accidents on that route (a couple of them fatal and both of them were unrelated incidents in June 2012) I decided it was probably best avoided - maybe another day.

North Rake was plenty steep enough for me, it was fairly well marked with cairns and it looked much worse than it actually was and I thought it was a really fun route to take once I got into it.

Pavey Ark was Wainright  #1 of the day and we celebrated with a slice of Chocolate Guinness Cake before continuing on our way.

From there, the 0.3 mile walk to Thunacar Knott was very straightforward albeit quite boggy underfoot and in very wet weather it would be tricky to take the direct route.  This was Wainwright #2 of the day and was also a Hewitt.


The views and scenery were absolutely stunning, it was hard to take it all in, blue clear skies and warm sunshine, we've waited so long for days like this.

The climb up to Harrison Stickle was steep but a fairly easy climb on rocky steps.  The views were absolutely stunning!  This was Wainwright #3 of the day.  Spent ages admiring the views before continuing on the walk. 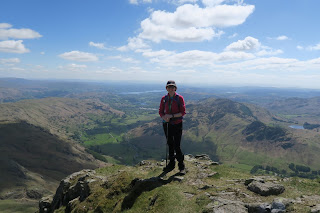 The route back down from Harrison Stickle was very steep and rocky, it wasn't particularly difficult and Mark flew down it but I found it hard-going on my knees.  I had knee surgery some years ago on my right knee and just recently my left knee has been complaining, I'm going to do everything I can to avoid any surgery as it took such a long time to get back on my feet last time so I've been working on knee strengthening exercises to see if I can build up the muscle - so fingers crossed.

Onward to Loft Crag - very soon we were climbing steeply up to the summit and were rewarded with  more fantastic views.  This walk is one of the best we've ever done.  No caches at all but then we didn't come here for those.  We hope to find a couple on the return leg on lower ground.

Next stop Pike of Stickle.


We could see the inviting steps up to the Pike of Stickle summit from Loft crag, before long we had made our way up the steps, eventually they ran out and we still had quite a steep climb to reach the summit.  We had a false start where the route was just too precarious so we returned to the path and found a better route.  Once at the top we got talking to a guy who had just found his 105th Wainwright, we enjoyed a chat with him about upcoming travel plans and then went off to find a sheltered spot to eat our lunch.  The views were simply stunning once again.

We had a brief debate about which route to take back and decided the most scenic and possibly 'easier', although longer route would be to stick with our planned route via Stake Pass where we found our first cache of the day before joining up with the Cumbria Way.


This was indeed a very long route with a fairly steep descent in places and by this time my knees were really feeling it. I was really put to shame when a small group of women came haring past, they must've been a good 20 years older than me too!  Hopefully that'll be me after a few more months of fell walking.

It was good to finally get down to the relatively flat path again.

At about the 9 mile mark, we found cache number two -  a nice quick find and we reapplied the sun cream before continuing on along the Cumbria Way.

We encountered a small group of cattle on a narrow stretch of the path on the Cumbria Way, there were a couple of heifers with their calves, luckily we were joined by a couple of lads just before we reached them, we had a joke about tackling one each and then cautiously walked past them without incident - well there was no way I was heading back the way we came.
After a short (steep) detour to Dungeon Ghyll to find another cache it was back to the car. 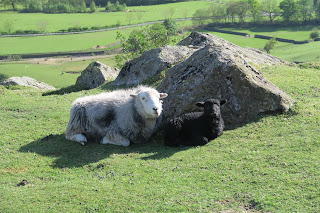 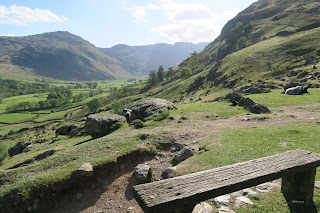 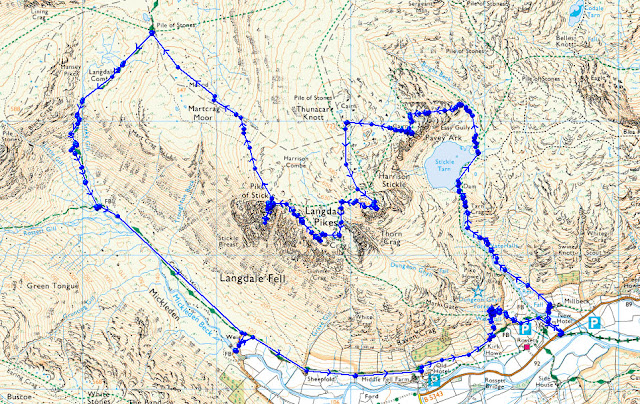