At last the long anticipated day had arrived, we were off to Essex.  The time has just flown since it was announced that Essex would host the 2015 UK Mega event back in April 2014.

There were lots of side events planned in the run up to the MEGA but we were only able to attend from Friday to Sunday due to work commitments so we knew we were in for a fun-filled weekend.

We set our alarms for 4 (yes 4am!!) and left the house at 5am to arrive in time for the CITO event at Cudmore Country Park on Mersea Island for 9am. 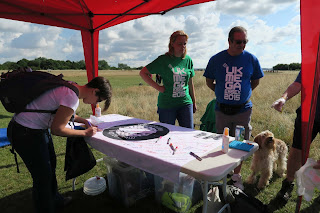 After a good journey down we arrived to find lots of cachers already collecting litter, we had our own grabbers and bags and went off in search of litter.  There wasn't a lot to find as everyone had already done a great job of tidying up the place so we decided to go off and play the new Wherigo.

We met our Cornish caching friends in the car park, Spooky Luke, Cornish Candy and Stompy and Stampy so we decided to join forces out on the sea to play The Big Splash Wherigo.  We quickly inflated our kayak and headed down to the launching area.

We were so lucky with the weather, it was gorgeously sunny and the sea lovely and calm – in fact the sea was more like a mill pond, not at all what we were expecting.


After working our way through the zones we found our way to the final and we were all really chuffed to be FTF.  It was fantastic fun and we could have happily stayed out there all day padding around.  Once back at the shoreline we bumped into one of the cachers that had placed the cache for the Big Splash Wherigo and he told us that it was a different story when he placed the final, the sea was very choppy in really poor weather conditions!  Then it was back to the car for a picnic then onto the next event. 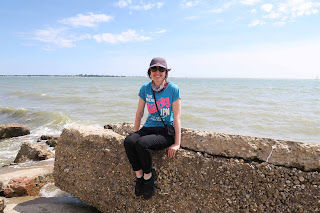 I have to confess but until I saw the listing for the Mersea Day event I had never heard of Mersea Island (pronounced the same as the river Mersey) but I suppose I can be forgiven as anyone I have mentioned it to since I came home hasn't heard of it either.  Mersea Island is the most easterly inhabited island in the United Kingdom and is one of 43 (unbridged) tidal islands which can be accessed on foot or by road from the British mainland and has an area of around 7 square miles. 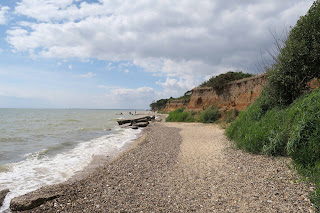 A really nice touch was to include a little challenge for the day, this was an icon challenge.  We thought this was a really good idea and enjoyed going around the island ticking off all 9 icons.   The co-ords for the puzzle took you to the entrance of Mersea Roman Barrow and the Essex Mega Team had arranged for the barrow to be opened to visitors between 12 – 2pm, we arrived just before 2pm in time for the last tour.
There was a really informative talk then we were allowed to look inside the barrow.  You didn’t need to go inside the barrow to get the answer to the puzzle but we wanted to as it was something you wouldn’t be able to do very often and certainly not with a guide so it was well worth it.


After going off to find the puzzle we headed off to find another Wherigo then back to the event to claim our prize.  Unfortunately we had just missed the organisers but our caching friends from the Isle of Man – Stillroaming and Two of Nine were just about to leave so we enjoyed a lovely long chat in the early evening sunshine with them before going off for a bite to eat.

Then it was off to the next event where we enjoyed a nice chat with caching friends old and new and were able to pick up our icon challenge prize.

What a fab day. Bring on the Mega!!

We were up bright and early ready for the mega event.  The sun was shining and there wasn’t a cloud in the sky, perfect!  We got to Barleylands at about 9am and cachers were just starting to arrive, registration was at 10 so we just milled around chatting until it was time.

The lab caches were released at 10am so we decided to make a start on those first.  I’m not a massive fan of lab caches for one reason or another but you can’t argue that they are a great way to get cachers talking to each other at mega events – we've made lots of new friends this way and it's also a good way of keeping cachers at the event for longer.

These particular lab caches were very ingenious and are probably my favourite ones so far.   One of them involved going to the top of a climbing wall which I volunteered to do first then Mark straight after. This was such great fun.  There were some rather unique ways to get lab cache answers which included: hooking a duck, using a UV light, texting, emailing, riding a bike!, scrabble and sticking your hand in a box of goo and gunge – yuk!


The Mega event was extremely well organised, in fact you couldn’t fault it, there was loads of parking right next to the venue and helpful signposts pointing people in the right direction around the venue.  Even on the Friday at the Mersea Island events there were mega volunteers posted around the island and they would pop up and offer help out of nowhere.   The mega committee deserve a massive pat on the back for putting on such a brilliant mega. Their efforts really are appreciated.


After leaving the mega event we headed off to Hadleigh Park – stopping off to find LQ Essex on the way - Hadleigh Park was the venue for the 2012 Olympic mountain bike event and is now open to the public as a free to use trail centre.  There were 2 Mountain biking Wherigos set for the mega event. We had our bikes with us and it was a great way to spend the rest of the afternoon although hardgoing in hot sunshine.

I was absolutely thrilled to bits to see an adder snake on the path – but as is often the case with wildlife, by the time I'd got my camera out of the bag the snake had slithered into the grass, I just about managed to take a pic as it disappeared.


After sweating it out on the course we headed off to find some tea before going off to do a bit of urban exploration– this time it was on an abandoned pier – known as the Occidental Pier – I've uploaded a short video below.  We had read up about this pier before our visit and we weren’t sure what the access was going to be like but some caching friends that had visited earlier in the week told us that, rather helpfully, someone has left a ladder to make access onto the dilapidated steps a little easier.  If there weren’t caches at the end of it we would’ve been a bit more wary but we thought – why not, let’s go for it.  It is an abandoned oil refinery jetty.  The Occidental site was abandoned in 1975 leaving a half-built oil refinery, storage tanks and the unused mile long jetty which cost around £10 million of the approximate total of £60 million spent on the project.


As it was going to be a 2-mile round trip and light was fading fast we decided to take our bikes with us – yes you did read that correctly - our bikes.  This proved very tricky taking two bikes up a ladder then up dilapidated steps but undeterred we folded up the bikes and I managed to lift them one at a time half way so Mark could grab them and carry them to the top of the tower. 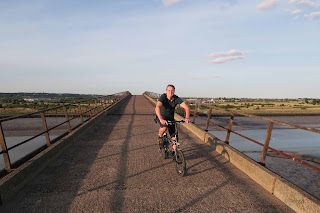 Once at the top of the pier it was plain sailing as the surface was a good concrete road – so we whizzed along on our bikes to the end, stopping to find the caches along the way and to take photos – this was such an exciting place to explore – and we spent quite some time taking in the peaceful tranquillity as the sun went down. 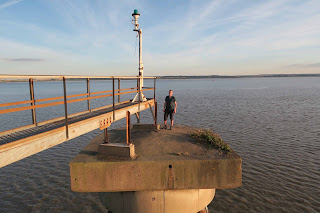 We would recommend this place to anyone with a sense of adventure and a head for heights  - the fencing/barrier is missing in quite a few places so not at all suitable for youngsters.

We headed of to the Big Breakfast Event first where we enjoyed a bit of caching and chatting.


Next stop, Langdon Plotlands CITO event.  We arrived before it started and waited patiently to be split into groups - there was  group for digging holes and putting up a fence, one for litter picking and another for bramble clearing and pruning - we already had our trusty grabbers with us so went in the litter picking group.  We found a good bag of rubbish and a few caches along the way too.  Great fun.  We spent a lot longer at this event than we had originally intended, we didn't leave until getting on for 2pm so we decided to just head straight home as we had a good 150 mile journey ahead of us. 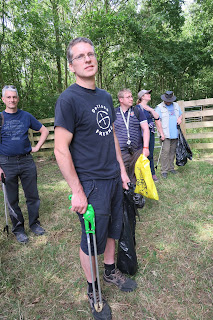 What a brilliant weekend, we really didn't want it to end, we had a fabulous time, met so many lovely people and generally had a lot of fun - I would even go as far as to say that this is my favourite UK mega so far!

Looking back on the last 8 Annual UK Mega Events

This was the 8th 'Annual UK Mega Event' and along with only a handful of other caching teams we have been lucky to have been able to attend them all - The years have flown and we have enjoyed all of them.

I was having a little look at Project GC today and comparing stats on all the UK Mega Events (obviously not counting 2015 just yet and excluding Piratemania/Halloween/Kent) and it makes quite interesting reading:

Also these numbers don't take into account total number of cachers signing in on the day but it makes interesting reading all the same.  Wonder what the total will be for this year..........


Bring on North Wales Mega 2016 ....... although not too soon I might add as we'll be another year older then Arrghhh! .... also I don't want to wish it away too quickly as we've got a lot to fit in before then.