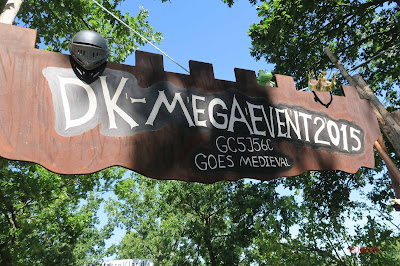 Back in February we spotted that there had been a Mega event published in Denmark and wondered if it would be possible to attend - we had already booked our trips to Germany and the US by this time and all annual leave had been allocated so we knew that if we were to attend then it would have to be just a flying visit for a weekend only - by April all our other weekend plans had fallen into place and we realised that we would be free the weekend of the Danish Mega, so all that was needed was to book our flights and hotel - we managed to get a great deal on the flights.

As soon as we finished work on Friday lunchtime we hopped in the car and headed off down to Luton Airport - the traffic was horrendous with roadworks and hold-ups along the way and the estimated 1½ hour journey took more like 2 hours, luckily we whizzed through security and arrived with 4 mins to spare until the gate opened.

There were no delays boarding and after a 1 hour and 25 minute flight we touched down in sunny Copenhagen. 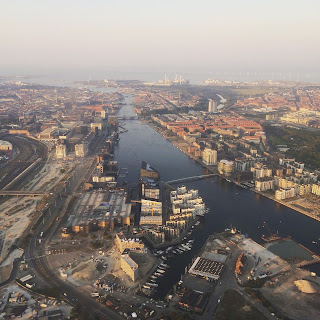 We were up bright and early for breakfast - The Mega event itself didn't start until 11am so we had a few hours to explore Copenhagen beforehand.  The sun was already shining and there wasn't a cloud in the sky - after the rainy week we've had at home this was just fabulous. 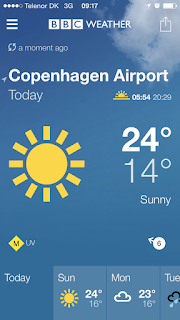 We enjoyed a really good walk around Dragør, on the south-eastern coast of the island of Amager. I loved the old yellow painted houses with red roofs, it was great fun working our way through the picturesque maze of cobblestone streets.  Many of the buildings here are hundreds of years old.


The jetty was really peaceful, there were lots of boats with people relaxing and enjoying their breakfast in the early morning sunshine - simply idyllic. 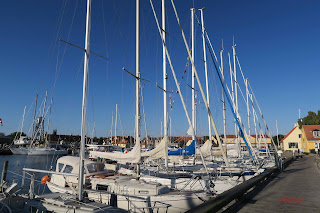 Then it was time to head off to the Mega event - we had a double take on the way as I spotted some elephants grazing on the side of the road - we stopped to take a look and it seems that they were part of a travelling circus. 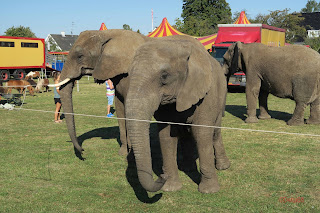 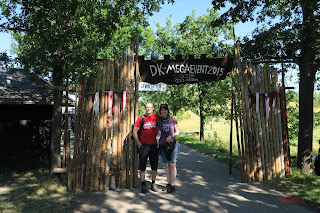 We arrived at the mega just as it was starting at 11am.  We were really pleased to see Spooky_Luke and Cornish Candy just getting out of their car as we arrived.  After signing in, we decided to join forces on the lab caches.  This was really good fun, some of the lab caches were very tricky as there was a puzzle aspect to most of them and then with the added language barrier they took quite some time to complete and we ended up spending most of the day on them.  The lab caches have really grown on me just lately - it's a great way of socialising with other cachers and as the event organiser explained, when they set new physical caches for the mega events everyone just disappears off to find them but with the lab caches it keeps people at the event for longer which is brilliant!


We really enjoyed the Mediaeval themed mega event and lab caches, the sun shone all day which helped of course, it was very well organised and well attended too. Everyone we met was friendly and really helpful.  It was good really good to meet the organiser Ronny Larsen too. 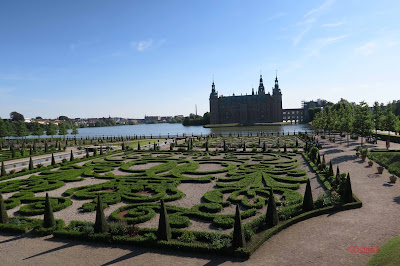 Then we left the Mega and headed off to Frederiksborg Castle for a bit of sightseeing.  This was one on my to-do list of places I wanted to visit during our stay and it just so happened there was a Wherigo to play there. 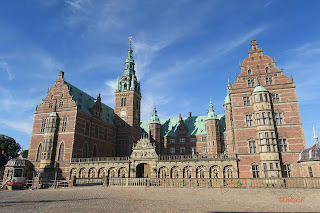 The castle is home to the Danish Museum of National History, we didn't go inside but spent a while wandering around the grounds and exploring the beautiful formal baroque style gardens. 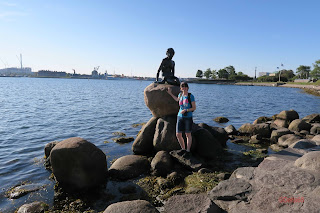 No rest for the wicked - down for breakfast at 7am and out by 7.30.  First stop was a Wherigo in Copenhagen and a visit to the Little Mermaid statue - this statue has been a major tourist attraction in Copenhagen since 1913 - it's not a lot to write home about - in fact I'd say Mark was pretty much underwhelmed by the experience but I was glad to have seen it after hearing about it. 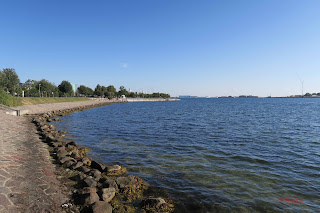 The weather was fabulous again and a balmy 26 degrees without a cloud in the sky.  Getting around in Copenhagen this morning was extremely tricky due to road closures for an Iron-man contest - every road we tried to go down was either blocked or diverted so this added a bit of time on to our journey. 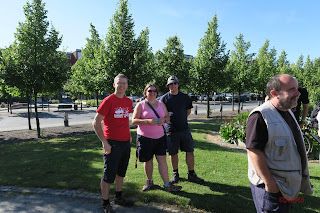 Next on the to-do list was an event - due to the road closures we were a few minutes late arriving.  It was really good to see Spooky Luke and Cornish Candy again at the event too. After about 10 mins of listening intently we really had no idea what was going on or what the event was all about as we don't speak a word of Danish - apart from Godmorgen, morganmad and a few other words to get us by - anyway a very friendly cacher realised we weren't native speakers and told us what the event was all about - basically the event was held by a local cache setter who had managed to set caches to fill the whole 81 grid matrix - in fact the final one was released on the morning of the event - he has set one of every difficulty and terrain combination to fill the grid, so a 1/1, 2/1, 3/1.... right the way through to 5/5 anyway I'm sure you get the picture.  Once again, everyone was very friendly. 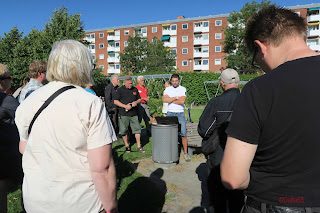 It was now 10am and we had quite a few hours until we needed to be at the airport for our flight home.  We said our goodbyes to our Cornish friends and went our separate ways. We decided to spend the rest of the day finding old caches - we'd already found Kippers in the Jungle back in 2013 so decided to pick of a few other old ones.  On the way to the first one, GC103 High Tension in the bog (love these low numbered caches) the journey was impeded by road closures for the Ironman race so we had to find an alternative route - just as we were parking we were joined by some friendly German cachers who were trying to do the same thing so we joined forces and went together. 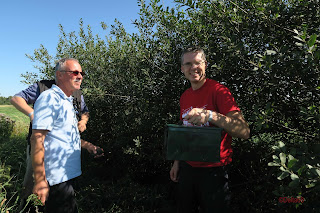 Then it was off to CocoBox which was a 24 mile drive north - we parked up behind a car with a trackable on and wondered if we would bump into the occupants at some point in the woods- we got to the cache and the log was signed for today - so we continued on to View of the Kat and bumped into the other cachers en route - had a quick chat before continuing on our way.  The walk there and back was 4½ miles - a fab walk for the two old caches.  Then there was just time to select one more, this time from May 2001, before heading off to the airport - we just picked the one with the shortest walk on our route back. 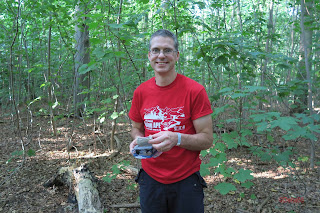 We cut it quite fine going through security and we hadn't realised that there was a 14 min walk from the Terminal to the gate!  So we had to run to get there in time and just as we arrived they were closing the gate - I think this is the finest we have cut it.  Then it was straight onto the flight and back home. A brilliant weekend - fab weather, great caches, lovely people...... can't wait for our next adventure. 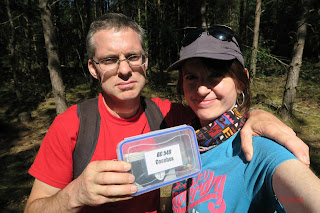