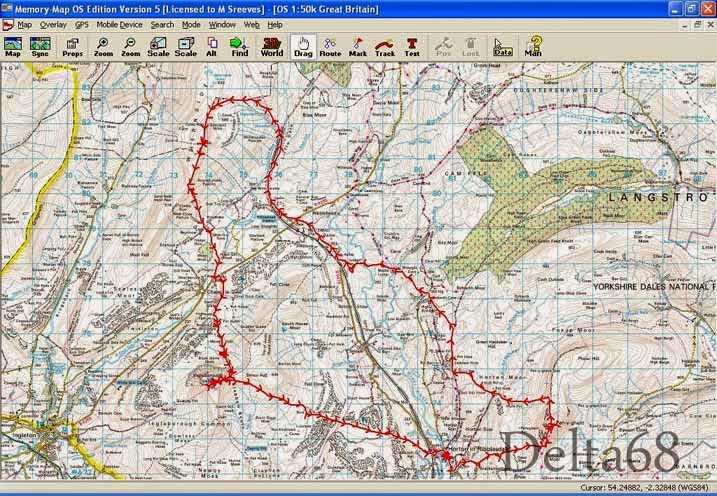 This blog is written by Mark for a change:

Being UK’s top Wherigo finders (by quite a margin

), the Yorkshire Three Peaks Challenge Wherigo was obviously on our to-do list and it was also our oldest unfound Wherigo in the whole of the UK.  So, it was just a question of when to do it.  Donna was sure she’d be able to do the walk but wasn’t so confident about the twelve hour time limit (not to mention a knackered knee) so drempels (our 20 year old son)  said he would accompany me as he was really keen to complete the challenge

.  With the end of the summer drawing closer and drempels due to return to university in Aberystwyth next week it was a case of now or never... er... I mean next year.

Over the preceding days, the weather forecast was looking favourable - light cloud.  Sounded ideal in fact. OK, it might spoil the views a bit but at least it wouldn’t be too hot or too wet.  We live 168 miles from the starting point in Horton-in-Ribblesdale so we then had to decide whether to drive up the day before and stay somewhere locally or just make an early start.  Early to bed early to rise and all that!  Bed at 20:30 and I got up at 01:45.  Lunch made, breakfast eaten and bags packed we set off at 02:40 arriving at the café at 05:45.  Once we’d decided where to park and found some change for the pay and display machine we finally filled in our ‘clocking in card’ and departed at 06:10.  The Wherigo requires the player to 'clock in' at the start on a virtual clocking-in machine and then clock in again at each of the three summits and finally when back at the cafe. 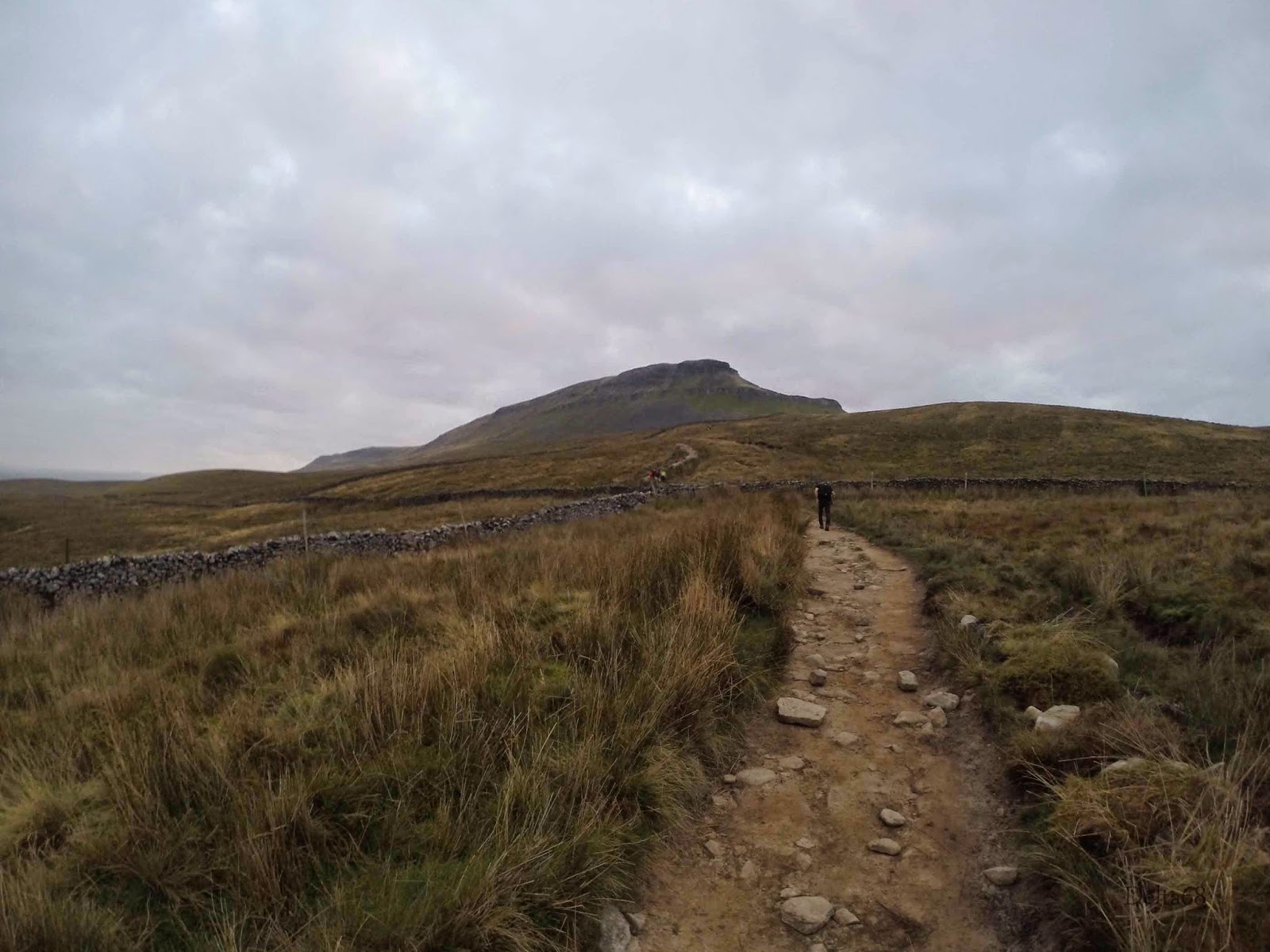 I’d read a few accounts and it seemed like the most usual route was to go anti-clockwise going up Pen-y-Ghent first. We overtook a group of walkers and then had almost caught up with a second lot when we took a detour to find Pen-y's-Bottom. Onward and upward to Pen-y-Ghent. 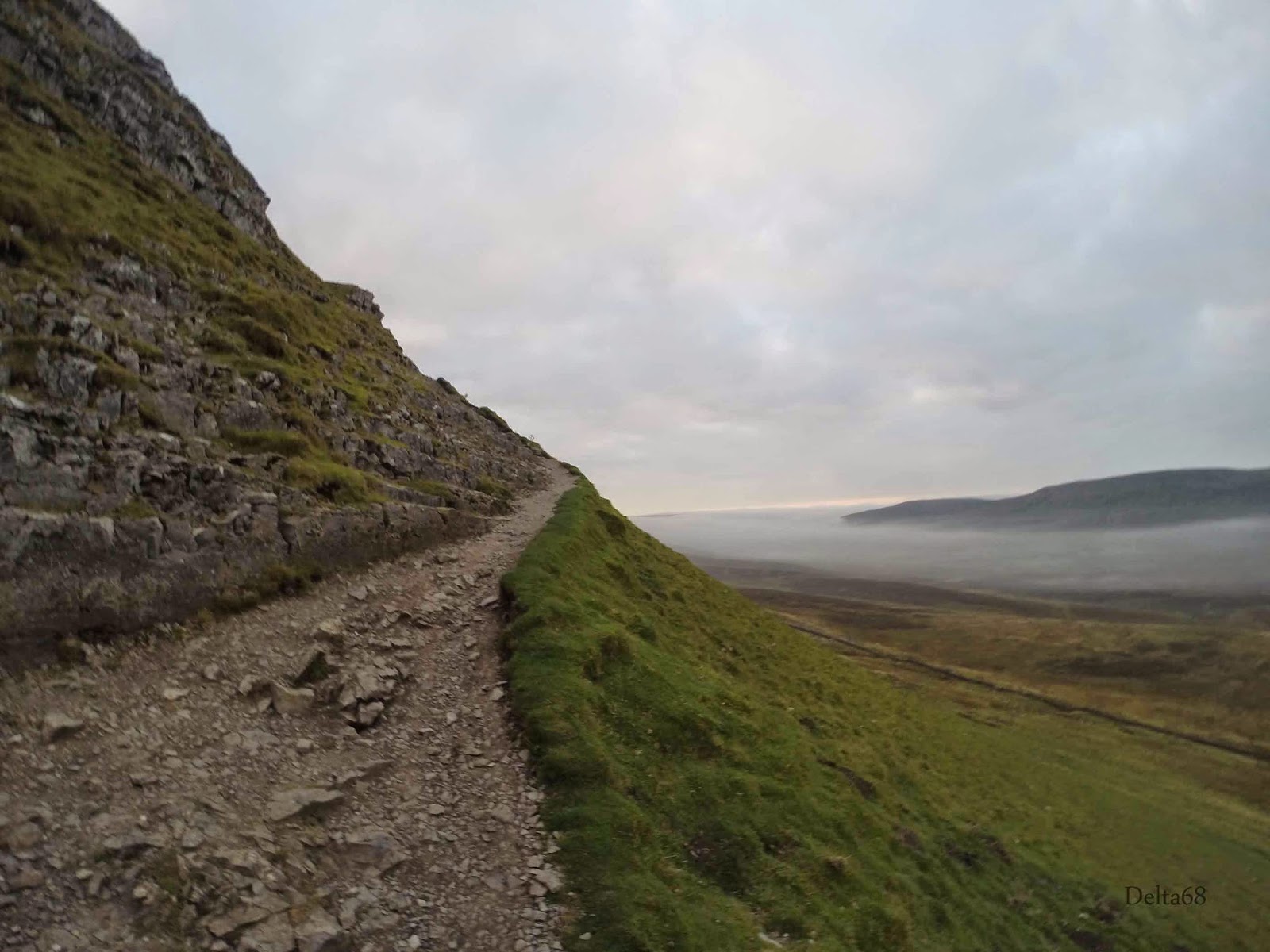 It’s a bit of a scramble towards the top and we caught up with the group in front on this final ascent.  ‘Clocked in’ with the Wherigo , took a few photos at the trigpoint and set off to find the two caches. The first one, Pen-y-Ghent, was easy but the other one was very close to a dry stone wall and we couldn’t find it.  We also decided that stopping to look for caches was spoiling a good walk.

The section between Pen-Y-Ghent and Whernside is an eight mile slog, I gave another cache a 30 second search before DNFing it and we walked straight past the next one even though it was only a hundred feet or so from the path.

The route on the approach to Whernside sweeps round in a  U climbing all the time.  We thought we were making good progress having overtaken quite a few other walkers but our efforts paled into insignificance when a couple of men in their mid 50s stormed past us.  We were about five hours into the walk and they had started an hour or so after us. It was their 23rd or 24th time doing the walk and they’d expected to finish at around 7 hours!

The ascent to Whernside is well made with flagstones.  The top was very busy with an organised party heading in the opposite direction having arrived there at the same time.  We clocked in on the Wherigo, photographed the trig etc and stopped for a bite to eat before setting off again.


We made an exception at the next cache, Whernside, and diverted form the path to it for a thankfully quick find.


The path down Whernside is very uneven and Ingleborough in the distance looked very daunting. The path eventually levelled out and the path improved. The pub looked very inviting but we pressed on. 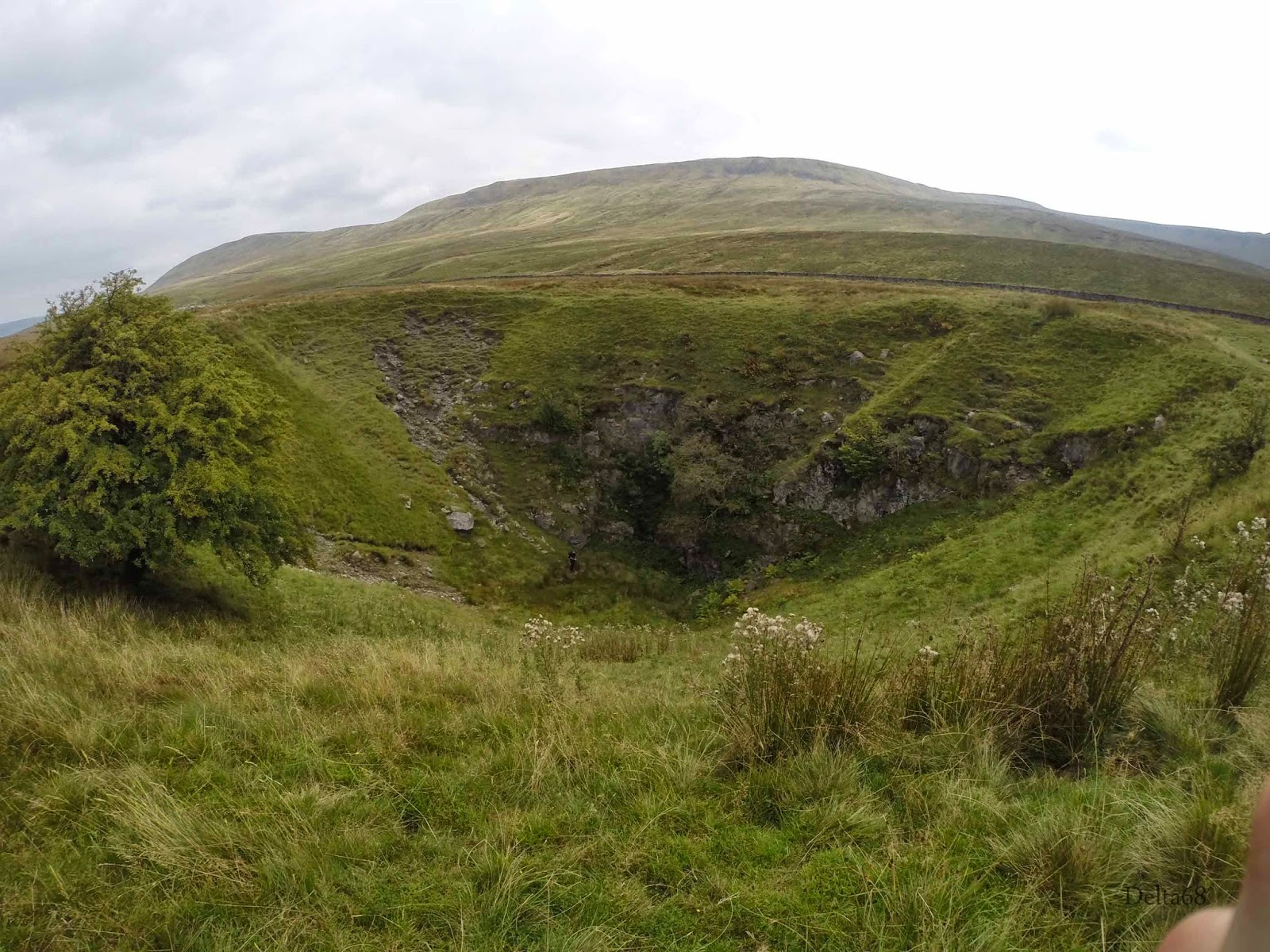 Next stop was for an Earthcache at Braithwaite Wifes Hole.  I’d been here once before when I was younger (1st August 1980 to be precise) and had been very amused at the name because my best friend at primary school was called Braithwaite!

We paused for a bite to eat before embarking on the evil looking ascent up to the ridge on Ingleborough.  The climb was slow but not too difficult and we were soon on the ridge and heading towards the trigpoint.  Clocked in on the Wherigo, photos at the trigpoint and then decided to look for the two caches at the summit after all, these were Ingleborough Summit and Ingleborough. Although I had decided earlier that we weren’t going to bother with the caches, we decided that these high terrain ones were too good to miss as we were already there anyway.

The route from Ingleborough back to the cafe is about 4.75 miles and it was 4.75 miles of sheer pain. The path is extremely uneven my knees felt every single knee-twisting step.  Drempels was by now having difficulty walking due to a couple of blisters on his toes.  We got talking to a couple on the way down, they had only been up Ingleborough and I said that we had done the three peaks starting at Pen-y-Fan!!  Well, it certainly felt like it

After what seemed like forever, we finally arrive at the cafe at about 16:45 and had a well earned pint - only orange juice though because we were driving home again shortly.

Email ThisBlogThis!Share to TwitterShare to FacebookShare to Pinterest
Labels: wherigo