Back in January, when we were booking our trips for the year, we were contemplating a return trip to Spain and Mark happened across a log by a previous cacher who mentioned Hungarian power-trails.  Intrigued by this comment, we had a look on the Geocaching map and spotted this one around Lake Tisza with 303+ caches.  We like to try and visit new countries whenever we can but had never really thought about visiting Hungary before but we though this would be a pretty good reason to go.  Within days we had flights, hotels and hire car all booked.

In March there was a lot of Facebook chatter about May 4th Flash Mobs and as we knew we'd be in Hungary we decided to hold our own.  It can be tricky trying to get light sabres though customs these days so we had to decide on a different theme.

There is a statue of a girl holding a pigeon in the middle of Tiszafüred that Mark had spotted on Google Earth ....... and an idea started forming. Hmm... a flash mob where attendees brought along their own Origami pigeons as these would be easy to transport and construct.  Once published we asked elisoft, a Coventry based Hungarian caching friend to translate the page for us. 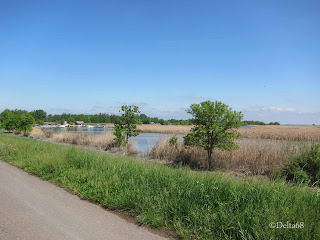 This power trail sounds great:  over 300 caches set on a flat, cycle-able path around Lake Tisza.  Just look at the map! Yeah it’s a long trail but there’s always the option of nipping back across the bridge after #212 if it gets too much.

We flew out to Budapest from Stansted and collected the hire car. A brand new VW Polo with only 17km on the clock.  The drive to Tiszafüred was easy enough although some of the motorway wasn’t shown on TomTom.  We also assumed we would find a supermarket en route to grab a bite to eat. We found plenty of supermarkets but they were all closed! This was a bit puzzling until it eventually dawned on us that May 1st was a Bank Holiday!

The hotel staff confirmed this a little later.

The next morning we hired a pair of bikes from the hotel and set off with the intention of finding as many caches as we could in the one day.  The trail started off well and we were making good progress – a find every two minutes.  Before long though, the caches were placed among the trees set back from the cycle path.  So, cycle 523ft..... hop off bike ...... walk down embankment through long grass 150ft...... locate cache (a lot of which were very high up in the trees) scribble on log book.......... traipse back up back to the bikes...... check for ticks!..... and repeat. It wasn’t all like this, some of the caches were placed by marker posts on the track but the majority required this extra 300ft walk. 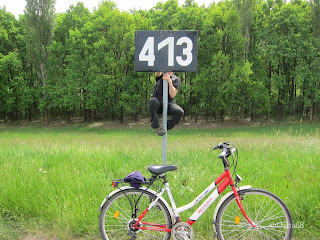 Oh yeah I was wearing knee length shorts so the first glimpse of a tick understandably put me off walking through the long grass!  As the day warmed up the mosquitoes became more and more of a nuisance as well.  We very quickly realised that we had no hope of completing this in one go so after about 20 miles we decided to call it a day.

We'd made up our minds we wanted to see a bit more of the area during our stay than just the power trail, also find a few other cache types and find time to relax, after all this is supposed to be a holiday right?

So as much fun as it was finding lots of caches around the lake it all got a bit repetitive and we decided to head back to the hotel arriving just in time for another delicious buffet meal which we'd earnt after cycling 40+ miles!

There are only six Letterbox Hybrid caches in the whole of Hungary and one of them is within Lake Tisza Ecocentre on the West side of the lake, luckily it was already on our list of places to visit so we didn't mind having to pay to access this one.  A really interesting place to visit with lots to see but unfortunately there were no English or German translations so we had no idea what we were looking at, interesting all the same. 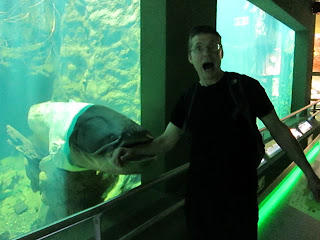 We are always keen to find as many different cache types per country so now it was time to find a Multi.  Apart from a couple of nearby Multis on islands (requiring a boat), the next closest  was a  two-stage multi  in a village called Tard about 17 miles away.  If this had been 17 miles on a motorway it would have been no problem at all. Instead it was along some of the worst roads we have ever seen. The potholes are horrendous. All the locals appear to be used to them and just happily whizz along swerving around them; can be quite disconcerting when oncoming traffic appears to be aiming straight at us for no apparent reason.


Another ‘interesting’ thing was the route TomTom directed us.  It appeared to be through an old military base with derelict buildings and overgrown concrete tracks (yes, this surface WAS actually better than the proper roads!) .  After a mile or two we felt very uncomfortable as we got deeper and deeper into remote countryside and when we ended up on an old runway we decided to turn around and find an alternative route.  Further research after returning home revealed that it was a former Russian reserve airbase. 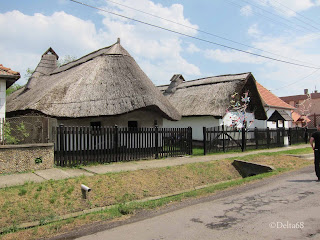 The Multi in Tard started at a pair of very old cottages way off the beaten track, I won't say tourist track as I don't think it exists in that area.

We were content to just to take a photo from the roadside but an old lady insisted on showing us around and explaining how old the houses were and what it was like living there in the olden days etc, etc... or at least we think that’s what she was saying because we couldn’t actually understand a word!  At one point she dressed Mark up in a traditional outfit and we were beginning to wonder how we could get away or how much it was all going to cost us, I bought a hand-crafted traditional cross stitch bookmark from her and she didn't seem to want any payment so after quite some time we had to make our excuses about having to be somewhere else and we made our getaway. 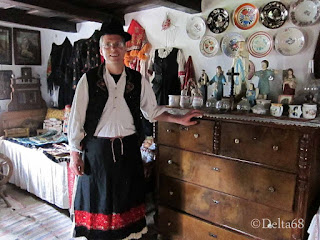 Final location was in a graveyard.  One thing that was noticeable was that some of the gravestones had birth and death year dates as is usual but they also had the birth year of the living spouse!  Made it seem like they were eager to be able to add the final date.


On Saturday, we hired some bikes from a hotel on the other side of the lake to do some more of the Lake Tisza Power Trail. This side was better than Thursday’s but as fate would have it 2000 other people thought it would be a nice day to cycle down that way as well. 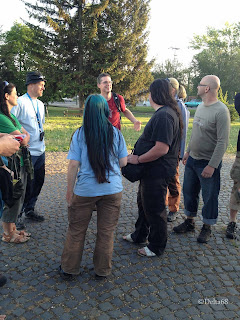 We listed our flashmob event in March and had no ‘Will Attends’ until 30th April, we weren't really expecting many attendees due to the remote location but in the end there was one German, two English (us) and 15 Czechs . The event went far better than we could ever have hoped.  Most of the attendees had their Origami pigeons and we all posed next to the Girl with Pigeon statue for a group photo.  This is one of the best things about Geocaching, you can go somewhere 1,000 miles away from home and make friends with strangers instantly even when you can barely speak a common language.  A truly memorable event.

Here's a short, heavily edited video from the event... 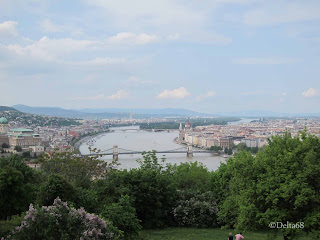