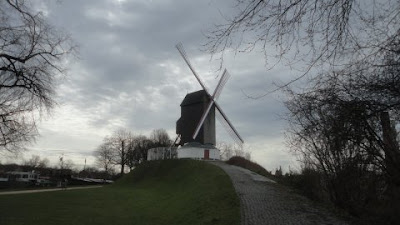 Back to Belgium ( by Mark)

We were keen to do the Brugge Mega event as soon as we saw it published last year but as it got closer, due to other commitments, we realised it was going to have to be a flying visit and probably just me on my own.  I was also really keen to increase the number of cache types in France as we’d only found four different types.

There is only one Letterbox Hybrid within fairly easy reach of Calais and even that one is a 40 mile drive. OK, so I decided to do it. Now to identify an easy Multi and a Puzzle. No problem with a puzzle because there are quite a few Challenge caches in the area for which we already qualified. Next  a  Multi. A lot of Multis in the area have a lot of stages but I managed to identify two which were very short. One of them was in Calais and it was possible to solve it beforehand. I emailed the owner who very kindly confirmed that I had the correct final co-ordinates but unfortunately  it would not be accessible at half past one in the morning. Half past one?  Oh, didn’t I mention that?  I was planning to catch the Eurotunnel at 23:30 arriving in Calais at 01:15. Plan B for the Multi was La plaine au bois, a straightforward 'read a plaque and go to the final location'.  It was possible at 2am albeit a little creepy!

After finding the Multi I headed towards the start point for the Letterbox but this was to be a 3.5km walk so I decided to park in the middle of the little town of Herzeele and get some sleep for  a couple of hours and arrived at the start point at 06:00.  The instructions are in Dutch and French and although I put them through Google Translate, they still didn’t make much sense so I had contacted the cache owner explaining that my Dutch & French wasn’t very good so could they send me the final co-ordinates.  They sent me an English version of the text instead!  Oh well, it was worth a try.  Even this version didn’t seem to make much sense so I was a little apprehensive especially as the cache hadn’t been found for ten months.  In the end it was all very straight forward and had no problems at all. 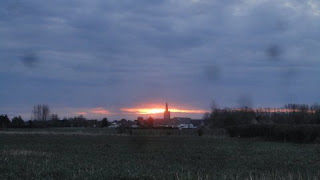 The Puzzle I’d selected was no problem at all. I then realised that the route to Brugge took me within a few miles of Tyne Cot.  This is a virtual cache at the First World War cemetery which our daughter Pegz had actually done a few years ago while on a school trip.  She was not best pleased when I texted to tell her where I was as never misses an opportunity to tell us that she had found a cache that we hadn't.  Oh well she'll just have to go and find another then!

Now to head to Brugge and the Mega.

I’d made a list of caches I wanted to do in Brugge.  Mainly 7 Icons Challenge cache which you needed to find caches of seven different cache types and the cache itself all in one day.  I thought this was a really clever way of side-stepping the usual ‘previous finds must be allowed’ rule!

The list of caches consisted of the Multi, a Letterbox and Puzzle listed above plus I had  a ‘spare’ French Multi and Puzzle lined up just in case.  I’d decided on an EarthCache and Wherigo in the middle of Brugge so I decided to take my trusty mountain bike with me.
Brugse Beer is in its third year and in this short space of time has grown to Mega status so has more in common with Piratmania back home than the other 'UK Mega Events' which were designed to be big from teh start.  Arrived at the Mega, and after chatting to some other cachers headed  into Brugge to do the cycle Wherigos and the EarthCache.  The Wherigos were hard work but made a very nice tour of the town. 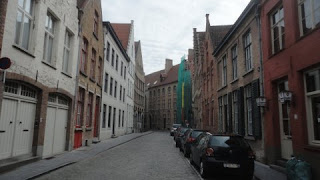 I then returned to the car, found the 7 icon Challenge cache and went to do a new Wherigo about 15 miles away.  This was a really pleasant walk in a lovely little village of Bekegem. Now back to a McDonalds for the short evening Event - that's definitely a first, never been to an event at a Maccys before. I  hadn’t planned to do any more caches but I spotted Het Gele Bussie  in the car park. This a moving cache in the shape of a VW campervan. 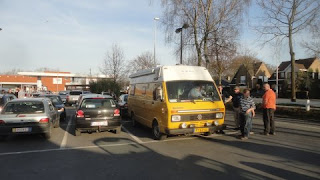 All too soon it was time to leave and head back to Calais.  I actually arrived at Calais just in time to catch the earlier crossing and was soon back in England arriving home at 00:30

Some numbers: 29 hours from home to home,  610 miles and 15 caches!
We have now found seven cache types in France and ten in Belgium!