A Bike Ride Around Redditch

A circular route around Redditch in Worcestershire consisting of 39 caches.  The whole route is bike friendly as it follows bus routes and cycle paths.


As soon as we saw this series published a couple of weeks ago we thought it would be perfect to do on our bikes, so we pencilled it onto the calendar for this weekend as it finally looked like Spring was going to arrive!
The series takes you through Redditch Town Centre and if you stop off to do the Church Micro at St Stephen's Church you will see The Bartleet fountain which is an interesting piece of history as it was presented to the town in 1883 by Mr Bartleet, a prominent figure in the local needle and fishing tackle industry, to commemorate the town's new fresh water supply.  It's made of cast iron by the Coalbrookdale company in Shropshire.  It was extensively restored in 2003 by a specialist company using historical records.  The team made  carvings and castings in order to reproduce damaged or missing components and to reinstate original details which had been lost through corrosion. 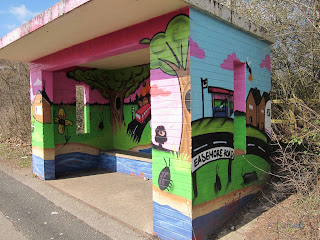 On the series you will pass some very decorative bus shelters and most of them are part of a Bus Art cache series.
We met the Hardy Clan on the way round and also spotted StormyStorm's cachemobile so think Butttercup and Stormy must've been out on the series somewhere.

If you stick to the series it's 8.5 miles but we took in a few detours along the way for additional caches so we made it nearer to 12 miles.

All the caches were fairly straightforward to find with good hints where necessary.

An enjoyable bike ride on a beautiful Spring day.

Email ThisBlogThis!Share to TwitterShare to FacebookShare to Pinterest
Labels: caching by bike, Worcestershire