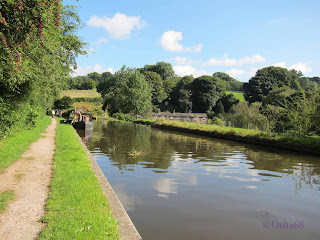 A series of 110 caches set on a linear walk of 17½ miles along the Macclesfield Canal.

We'd decided to head up to Cheshire today to tackle the KT Power series along the Macclesfield canal.  We parked at Macclesfield Station and paid for an all day ticket with the intention of walking down the canal to Kidsgrove where we'd catch a train back again.

The station car park is about ½ a mile from the start of the trail so after a short walk we were at the first cache and signed the log at 10.35am.  A beautiful sunny morning to be out caching..  This is how the summer should have been, seems crazy that we're now at the end of the summer and heading into autumn! 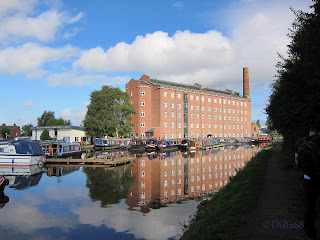 Most of the series has been disabled but as we'd already planned our trip to the area when we noticed the series was having problems we contacted the CO and asked if the caches were still doable, they were so we decided to go ahead.

The first cache was really straightforward to find so then we knew what we would be looking for from then on.  What a great way to hide the caches, none of that scrabbling around in the bushes and having the area trampled down by over-enthusiastic searchers, it was obvious (to a cacher) where the caches were hidden.

We noticed quite early on that we were following another cacher but didn't recognise the name, when we got to B52 (GC2B7QC)  we realised we were following caching friends AJIGeo and The Strangler, they had abbreviated their names in the micro log books for speed/save room, so a quick phone call and they weren't too far ahead so we hoped to catch them up. 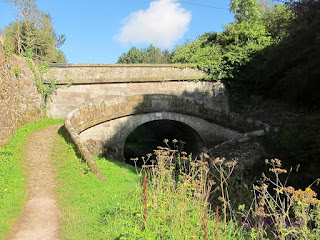 On the way we met some really friendly cachers and stopped for quite a long chat, they were Haynes Pirates, ska face and birdwatchdave.  They had caught the train from Macclesfield down to Kidsgrove and were walking back to Macclesfield, they said that they had bought return tickets as they were only 10p more than single tickets but wouldn't now be needing them so very kindly gave them to us.  We really appreciated this as it saved us nearly £10.  Then we went our separate ways and we realised then we had a bit of time to make up if we wanted to catch up with our friends. 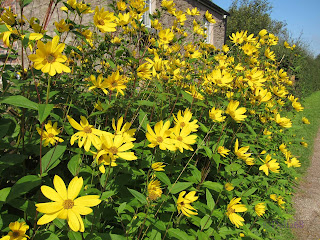 As we walked we could hear bagpipes, not just any old music but Auld Lang Syne er... in September?  We thought maybe someone on board a canal boat was playing music but as we continued we realised there was a man standing on the tow-path playing bagpipes!  We stopped for a chat and he explained that he's been practising his bagpipes every week for many years in the middle of nowhere on the tow-path.  He said he was trying to perfect Auld Lang Syne in time for New Year's Eve

We rang ahead and luckily Alan and Dave had stopped for a lunch break so now they were only 2 caches ahead of us so we soon caught them up.

It was great to finally meet up and we continued on for the rest of the walk together, caching and talking as we went.

We weren't sure how long the walk was going to take us but the train from Kidsgrove ran every hour at 5 past the hour so we had made a mental target to get to Kidsgrove for 18:05, with one eye on the time we hoped to make it, we got to KT #107 and realised we only had ½ an hour to go so we quickened our pace even though our feet were killing us - it's really time I got some new boots before the next long walk, with all the rain we've had I think mine have shrunk.  We got to the last cache, KT #110 and it was 17:50 so we said our speedy 'goodbyes' and then hurried off to the station as we still had 0.6 miles (in a straight line) to walk to get to the station.  It was along the pavement and really hardgoing on tired feet, we ran the last bit and got onto the platform with seconds to spare!  Then it was onto the train and we were so glad to sit down at last.  We love travelling on trains so this was just added even more to the fun of the day. Then can you believe it, after walking for nearly 8 hours it only took 15 mins to get back to Macclesfield!!! 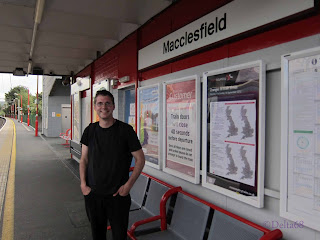 The stretch of canal from Macclesfield to Kidsgrove has to be some of the prettiest we've seen, the one thing we noticed was there was hardly any litter and we met loads of people, all really friendly.

We were really glad to see the car but what a fantastic day we've had, then it was off to Maccys for a cachers' tea

A lot of work has gone into setting this series and we'd highly recommend it to anyone who likes a bit of a challenge, a long walk, finding lots of caches, beautiful countryside.... oh and trains