For some time now, our UK county map has had a very obvious white blob on it just off the South Coast. This is, of course, the Isle of Wight so we decided it was about time that we rectified the situation. We arrived home from France on the Tuesday night, checked the weather forecast for the rest of the week and it looked pretty good so we booked ferry tickets for 09:25 Thursday morning and a Premier Inn for Thursday night in Southampton.

Once again, got up at some unearthly hour and headed down to Lymington arriving some two and a half hours later just in time to get an earlier ferry. Super!  After the short crossing we got off the ferry at Yarmouth and drove round to Alum Bay with a slight detour for the cache Fort Victoria on the way.  Alum Bay has a former military base which is now owned by the National Trust and an EarthCache by The Wombles which has quite a few favourite points; both of which we were keen to visit.

Alum Bay also has a ghastly amusement park for the masses and a cluster of tacky touristy shops. We have no interest whatsoever in the shops or amusements but it meant that it cost £4 to park the car as there was no where else to park for free.

Being able-bodied (and tight-fisted

) we took the steps down to the beach rather than the very popular chair lift and made our way to GZ. The sands were pretty much what we expected but Beth said that she was expecting it all to be far more stripey.  I think her imagination had run wild.
Old and New Batteries

Somewhat unusually, there is an old Geocache actually inside one of the rooms of The Old Battery. We found it after exploring the rest of the site and reading all about its history.  Although also owned by the National Trust, the New Battery just up the hill is free to enter for non-NT members. The New Battery was built after the Old Battery when the guns got too large.  It was also the testing site for Cold-War rockets.  After the site had been decommissioned it was due to be demolished but luckily the National Trust stepped in and stopped the demolition and were finally able to restore some of the rooms.

Our son, Steven, had been on holiday to the island with his girlfriend in July and told us about a garlic farm they'd visited. The free magazine which we picked up from the ferry also mentioned it so we decided to go and take a look.  The owners have been growing garlic there for about fifty years and they make and sell a vast array of garlic produce.

Any visitor should go to the tasting room first. Yum!  We stocked up on plenty of garlic pickles in the shop and some seed garlic to plant at home

Many years ago back in 1972, I visited the Isle of Wight for a holiday with my family, I remember visiting a pub that on the outside looked just like a ship, one day when looking through some old photos with my children I found the photo of the pub and decided that if I ever visited the IOW again I'd find the pub and see if it still looked the same - and it did

Then after a quick stop at a trigpoint then at Maccys it was time to head back to Yarmouth for the ferry back to Lymington.

Our plan for today was to visit Brownsea Island.  Back in 2006 I had visited the island with Steven and Beth and Mark had to stay in Poole with the dogs as they weren't allowed across to the island so Mark has been keen to return ever since.  We had quite a few reasons for wanting to visit the island, one of them was to find GC23AD BP's Brownsea Island which was placed on 16th August 2001 - this cache is the 14th oldest active cache in the UK and,  apart from a virtual in the Scottish Islands, is the oldest one which we hadn’t found. 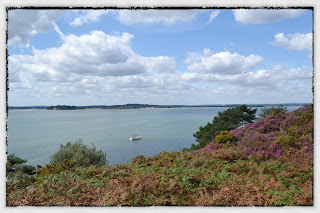 Visiting the island isn't cheap, first of all you have to park in Poole - roadside parking is possibly available for free if you're prepared to drive around looking for it but we couldn't find any spaces so parked in the main pay and display car park in Poole which cost £1.50 per hour!! ... bearing in mind you'll need to allow a good 6 or 7 hours for your visit - we were gone 7 hours.  Then it's a short walk to the Brownsea Ferry and crossings are every ½ hour, this cost £16 for 2 x adults and 1 teen, but I think it was 2 adults 2 children for £16.  Luckily we are National Trust members but if you're not then you'll need to cough up a further £6.20 per adult or if you're a family I think it's around £15.  If you're planning on visiting a few NT properties throughout the year, as we have, it's well worth joining (no I'm not on commission 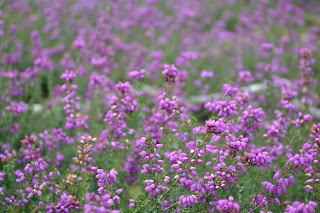 Another reason for our visit is that we love red squirrels and have been lucky to see them when visiting Cumbria but on our last visit to Brownsea it was too hot and they were all fast asleep during the day, it was quite hot today and we'd almost given up hope of seeing any but just as we were reaching the end of our walk around the island I spotted one then we started seeing a few more, a really lovely sight to see - the sightings coincided with us completing the Brownsea Red Squirrel Hunt multicache.

Beth, our daughter, was pleased to revisit as she's a keen Explorer Scout and is hoping to arrange a camp on the island so had a long chat with a couple of very enthusiastic leaders in the Outdoor Centre.


The time just flew, we had a fantastic day on the island, a beautiful haven of tranquillity that we'd highly recommend to anyone