The forecast this weekend was for sunshine and clear skies in The Lakes so we decided to head back up and tackle the hike we'd planned for last Saturday but had turned back due to the heavy rain.

We set off at 7:10 and the sun was already quite intense but we hoped to get the walk finished by midday. 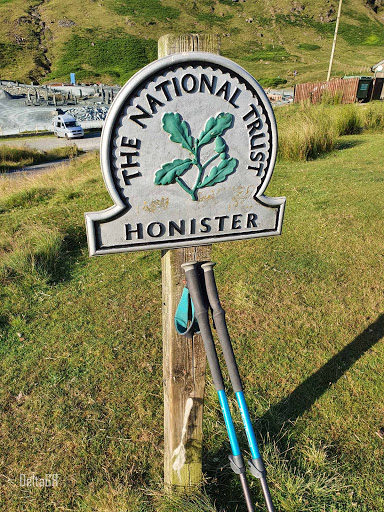 The walk starts in front of the Youth Hostel and is marked clearly by a sign pointing to Dale Head. 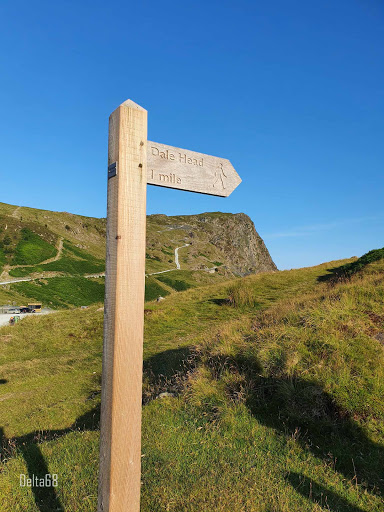 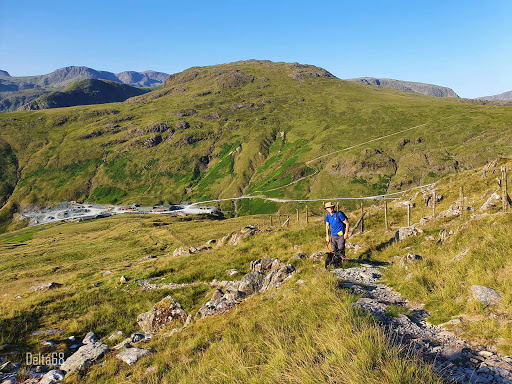 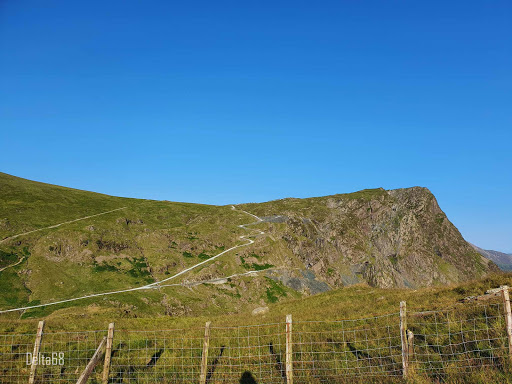 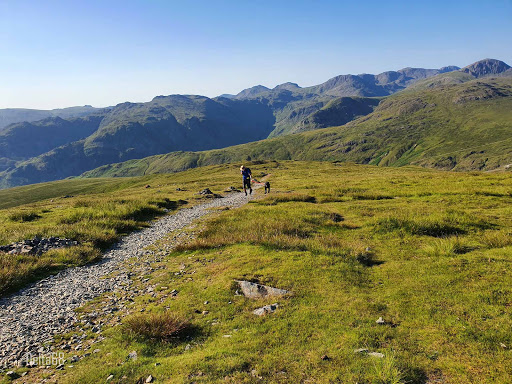 It was fairly easy going and after about an hour we reached the summit. 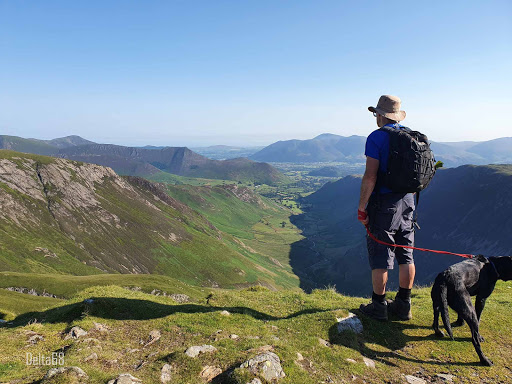 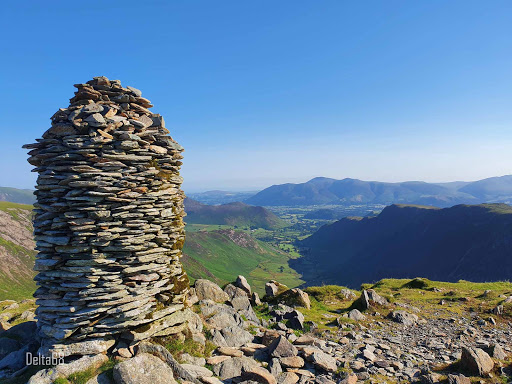 After enjoying the views and finding the Geocache we continued along Hindscarth Edge. 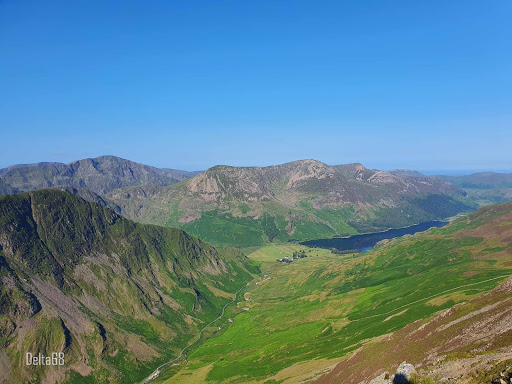 Impressive views all the way along Hindscarth Edge of Honister Pass and out towards Buttermere.  On the left of the picture you can see Fleetwith Pike. 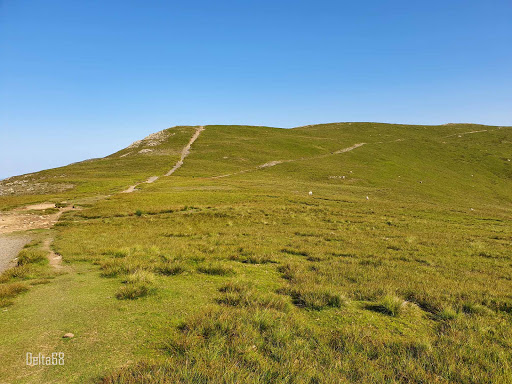 Hindscarth summit will be a there-and-back walk before continuing on to Robinson.  In the above picture we will be taking the path that forks to the right to get to Hindscarth. 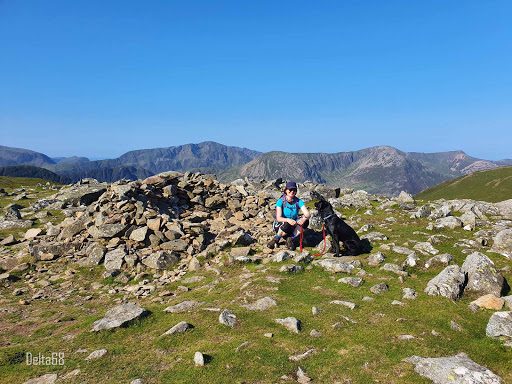 We reached Hindscarth Summit at 9:10, took a few photos then headed back along the track eventually forking off to rejoin the main path and along Littledale Edge. 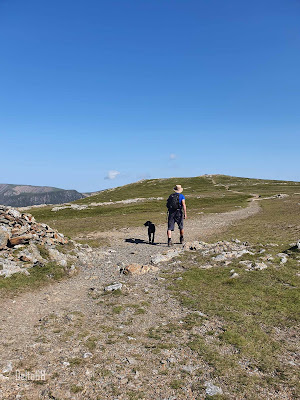 A straightforward ascent up to Robinson summit which was only made difficult by the heat of the sun.
After stopping to admire the views and take a few photos and all three summits completed it was now time to descend to Buttermere Moss 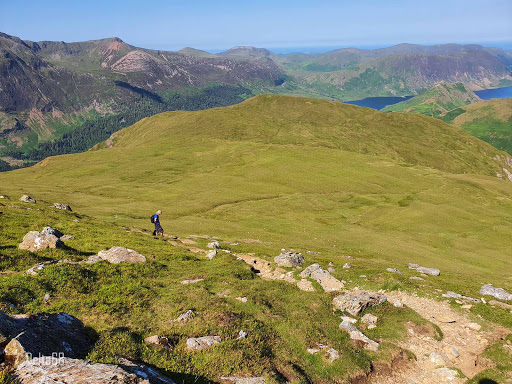 A quick time check and we had about a mile and a half to go before we reached Buttermere and if we could do it 50 minutes then we could get the 11:18 bus instead of the planned 13:18, which would've been the next bus.  So we quickened our pace but as we descended in the heat it became apparent that we weren't going to make it in that short time and rushing the walk was just daft as the scenery is simply breath-taking.  So we stopped and enjoyed an early lunch in the shade of a rocky outcrop before continuing down onto Buttermere Moss which was extremely humid and like walking in a greenhouse.  Quite boggy underfoot but nothing too serious.

At this point we met a small group of walkers on their way up to Robinson, they said they wished they'd started out early like us before the heat of the day. 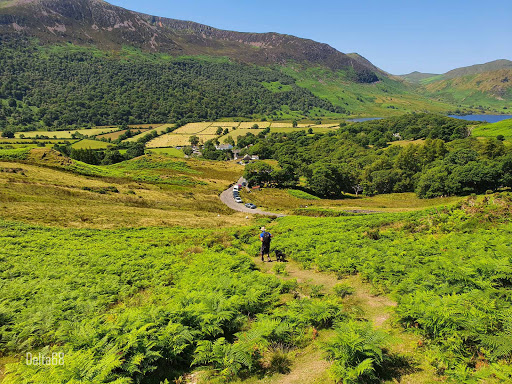 I find walking downhill much harder than going up, I've had issues with my knees for many years, I had surgery on my right knee in my early 30s but now the other one is complaining all the time so at one point I walked backwards downhill haha yep, it was less painful that way. 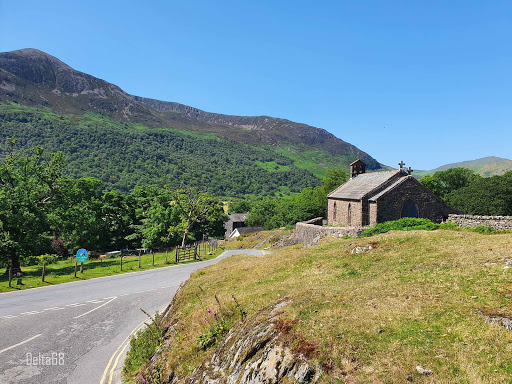 Just as we got into Buttermere a bus came past us going North, we didn’t think much of it really as it was going in the opposite direction to what we wanted. We continued toward the Bridge Hotel and saw the road was closed heading North – the very direction from which our bus would be coming. Oh no!  We asked the hi-viz jacketed people why it was closed and more importantly whether our bus would still get through and if not where had the one we’d just seen disappeared to?

We were told that the road was closed to all traffic due to a ‘multi-agency recovery operation’ at Crummock Water. No buses would be going past there in any direction and just as we started to think that we were in for a 4 mile walk on tarmac up Honister Pass we spotted the bus we'd just seen waiting at the side of the hotel. We quickened our pace, or should I say I hobbled a bit faster and we asked the driver which way he was going and when was the bus departing.  He informed us that he was going back to Keswick via the slate mine and should have left fifteen minutes ago!  What a stroke of luck! 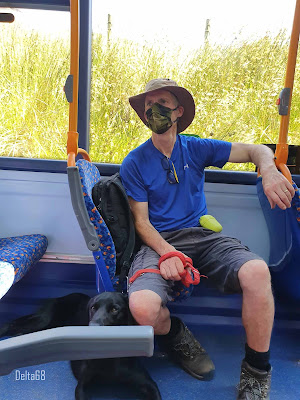 Honister Pass is steep - 25% hills in places - and narrow, the bus struggled to get through in a couple of spots as idiots had parked in the passing places. 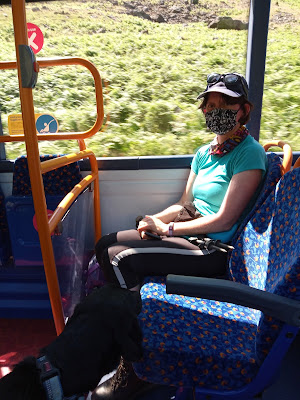 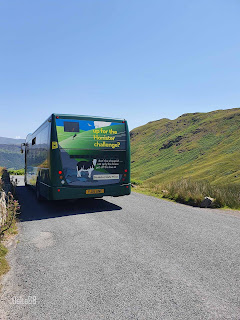 After relaxing at the van with an ice cream from the van's fridge, I had a walk around to stretch my legs and take a few photos of the various slate sculptures.

Check out Honister.com to find out what you can do at the slate mine. 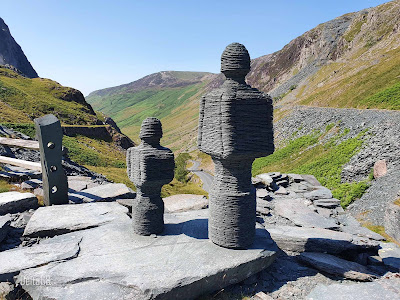 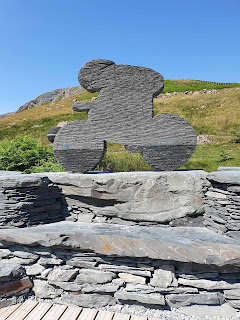 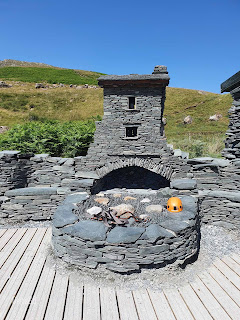 We’d planned to go SUPing on Crummock Water but obviously that was a no-no, so we decided to head towards Keswick and see if there was anywhere to launch on Derwent Water. We had a couple of places in mind but the traffic was horrendous.  Inconsiderate people had parked on the side of the road on the east side of Derwent Water meaning traffic could only pass in one direction at a time.  A bit worrying as there is no way emergency vehicles would be able to get through.

It took forever to get  along the road and everywhere was totally jammed with traffic. So we decided to leave the area and head towards Penrith.

Not only had we been very lucky with the timing of the bus, we didn’t see a another bus the whole time we were stuck in the traffic so goodness knows how long we would have had to wait in Buttermere if we hadn’t caught the one we had.

Once we were able to get a phone signal we were able to find out what had happened at Crummock Water and it would see that a man had very sadly gone missing while swimming and the recovery operation was still ongoing.

After stopping for something to eat, we had a pleasant walk around Penrith doing some Adventure Lab caches. 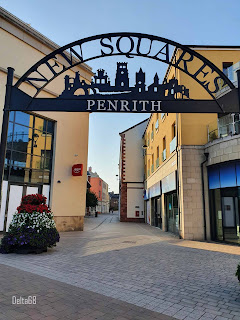 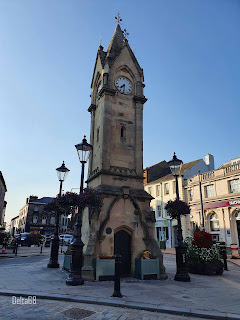 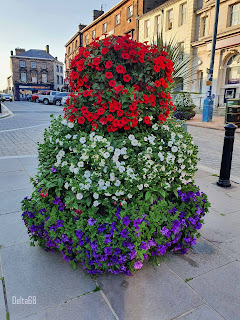 That's all for now, thanks for reading.