Nights are drawing in rapidly 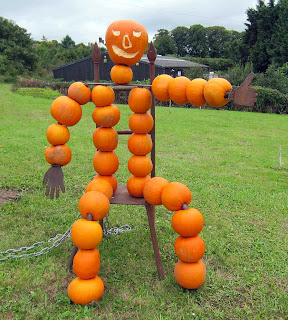 Since we got back from Prague life has gone back to being its usual hectic self but I'm trying to find time to update the blog a little more often, might get a little easier now the darker/colder/wetter days are here. 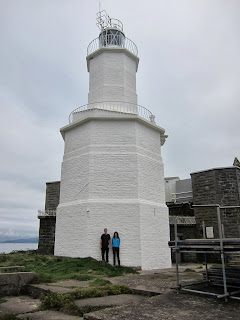 We took our son off to uni in Wales last month so decided to make a weekend of it and finally got round to visiting Mumbles Lighthouse Island, this has been on our to-do list since we spotted it when we went to the mega event in Swansea but we weren't able to fit it in.  In May 2012 it was Geocache of the week on the Geocaching blog so we made a mental note to visit last year but couldn't fit it in. 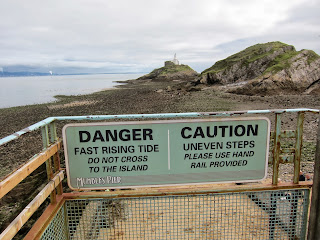 Then back in early September we planned to go but the tide times would've meant leaving the house at 3am or some other such stupid time so we looked again for the weekend we were taking our son to uni and the tide times looked perfect so we knew we had to go.  So glad we did, it was brilliant fun and the weather was lovely and dry and sunny.

Mark managed a short break in Cornwall last week, we'd been planning our return trip since our last visit in May but unfortunately I wasn't able to go this time due to work commitments but he had a great time finding all the Wherigos in the area. That brings us up to 127 in total.

I remember when we found our first one back in April 2008, the Whitchurch Wherigo, Mark really enjoyed it but I found it was a very solitary caching experience only having one Wherigo compatible device between us.  Over the last few years we've found them as an when we came across them but were concentrating on other targets such as old caches and D/T grid etc.  Now we've virtually completed all these challenges we tend to look out for more unusual rarer cache types such as virtuals, webcams and Wherigos.  Back in February Mark upgraded to an Oregon 550 so it meant we could both partcipate when completing the Wherigo, hence having found 113 this year!  Not that we're addicted or anything

Having an iPhone and Android smartphone has been a big help too as the players on these devices are excellent.  For some reason Wherigos haven't really caught on in the UK but in Europe they are becoming increasingly popular and increasingly inventive in gameplay.  Such as Domecek jednim tahem which is a 'play anywhere' Wherigo.  As the name suggests this type of Wherigo can be played anywhere and you end up with the final location.  Mark did this one over several evenings in our local park and it was all the more challenging as it's totally in Czech!  Then we were able to find the final whilst on holiday in the Czech Republic. 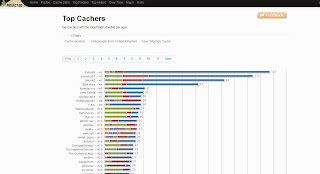 We'd been  monitoring the weather all week and rain was pretty much forecast for all areas but as luck would have it we were planning to do the new Wherigo in Shrewsbury and that seemed to be the only place in the country that didn't have rain forecast. 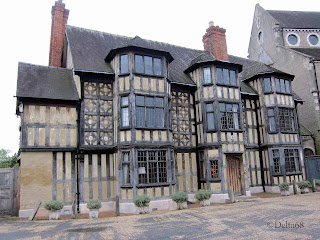 The starting point for the Wherigo is a pay and display car park but we decided to park a short distance away in a side street and do the Wherigo by bike, we keep our bikes in the cachemobile at all times so we can use them whenever the occasion arises. 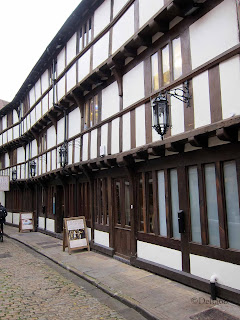 This was our first visit to the medieval town of Shrewsbury and we loved it.  The old buildings, quaint alleyways and individual little shops were amazing. 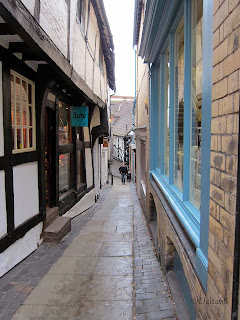 The Wherigo was an interesting tour around the town and we loved the ghostly theme and humour - 'Is that bacon I can smell?'

We picked up a few other caches around the town before heading out along the River Severn to do the Tinkerbell series which was really enjoyable on our bikes.

Then it was time to leave Shrewsbury and head over to Middleton Scriven, just south west of Bridgnorth to do Pen and Ceri go walking, which was a 4½ mile series which we did on our bikes as it was all on quiet country lanes.  The rain held off until about the last half mile or so then the heavens opened which then scuppered our plans to do the night cache near Kidderminster on our way home.  Oh well, never mind, at least we've still got that one to look forward to on a dry night.