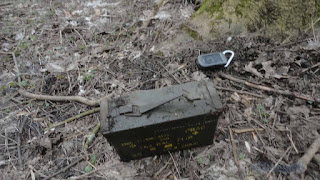 This blog is written by Mark for a change.

A few cachers have asked me about my trip so I thought others might be interested to read about my crazy 'day' trip.

Our 'Month Set' or 'Jasmer Challenge grid' has had a noticeable empty square in 2001 for some time now.  It's always been empty but only noticeable since the rest of the row was completed in 2011.

(Jasmer Challenge: Find a cache hidden in every month since May 2000, when geocaching started)

Caches for March 2001 aren't particularly rare - there are 193 world wide but none in the UK. The nearest one is G'ebbes in The Netherlands.  Rather annoyingly, we drove within 25 miles of it in 2008 and we were less than 50 miles in 2010 but we weren't trying to fill the grid at that time so didn't realise..... Consequently it's been nagging at us for a while.

Long way to go for one cache though.  How about finding some more cache types for France, Belgium and Netherlands at the same time to go towards qualifying for a Challenge Cache we are planning to find in the summer.   I decided to try and get the number of types up to eight for each country and set about researching which ones would be en route and easy - and also identified a few 'back-up' ones just in case of DNFs.

I left home 19:15 Sunday 10th March and trundled down to Dover to get the ferry at 02:20.  Amazingly, the car was showing an average of 58 mpg!   Arrived in Dover with plenty of time to have a doze in the car before setting off. The ferry was delayed by 30 minutes or so when entering Calais.

First stop, a Letterbox Hybrid just off the E40 near Gent.  No problem. 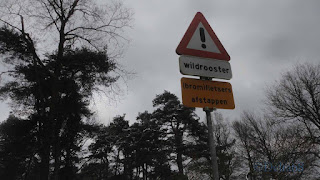 Next G'ebbes. G'ebbes is in a nature reserve and with about three miles to go the roads were closed because of a light dusting of snow!  No way! I had just travelled 450 miles and I wasn't going to be put off that easily.  I took the roads very slowly and parked within 0.3 of a mile of GZ.

Next a Wherigo nearby. No problems although the cache was covered in snow so took a bit of finding
A Puzzle was next on the list. Another easy find.


Now for  a Letterbox Hybrid - the one earlier in the day was in Belgium remember.  The one I had selected was in a service area of the motorway and it meant going 4 miles past it to the next junction and coming back down the other side. A DNF.  No sign of it anywhere.

Most of the Letterbox Hybrids in Netherlands seem to be tricky multi-stage things. I had made a note of  a simple reserve one but for some reason I forgot to download the details.  A quick text to gaz_zippy asking for co-ords and hint soon solved that problem.

Webcam next. This was 'fun'.
It's always best to try out webcams in advance because some require additional downloads etc.  This one was one of those. I'd got it to work OK on our little netbook but I hadn't managed to persuade anyone else to install the dodgey Java plug in.  I emailed the CO and he kindly offered to grab the image for me when I got there and he also gave me his wife's phone number just in case.

I got to GZ and phoned the CO: voice mail
I phoned his wife, also voice mail.

Got out the netbook and dongle and it worked fine
........ then the battery died.

Phoned CO again and he tried to access it but he couldn't because he was on a works pc.
plugged netbook into inverter and fired it up again.

Placed netbook on top of car (with powerlead going through window to the inverter) and got an old Dutch bloke, who didn't speak much English, to press print-screen when I was in the picture
I was just about in the picture so it will have to do.

The reserve Letterbox now.  No problems.
So, that was an extra four cache types in Holland bringing the total to eight.
Next stop a webcam in Belgium. This was quite a drive but it was in the right direction (sort of) Parked about 300ft from GZ and phoned gaz_zippy in a howling blizzard/sandstorm. Luckily this webcam is a straight forward static image so it was very quick.

A Belgian Wherigo next.  I had identified a fairly easy one and drove through the snowstorm to where it was and soon had that one ticked off as well.
So, that was another three cache types for Belgium bringing the total to eight. 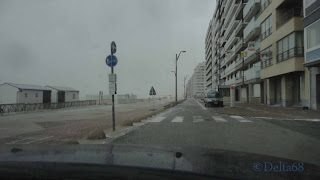 I had a Puzzle, Letterbox and Multi selected for France next but I was over 50 miles from Calais and the detour would have made it to 88 or so.  Not a problem but it was getting dark and the lanes were getting really bad with snow so I decided to call it a day and head straight to the port.

I passed a couple of accidents on the E40 but the traffic was running fairly well.  I checked-in and was told that I would be on the 18:50 crossing which was running three hours late due to the weather.
Not a problem.  It was some time later that we were actually on board and setting off. The captain had warned that the sea was choppy and there was a strong wind. I found somewhere to sleep and was woken a couple of hours later by an announcement saying that they had received a message from the UK police that the roads out of Dover were all closed and we would have to stay on the ferry until further notice. 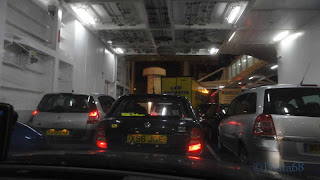 Luckily, further notice came just before we docked , albeit somewhat later than expected, and we were able to disembark after waiting about half an hour or so in the car listening to BBC Kent. This made very interesting listening as it consisted mainly of horror stories from listeners who had been stuck in their cars for up to eight hours! Oh dear!

The exit I wanted from the docks was closed and the police were diverting the traffic toward the A2
Hang on, I'm sure that was the road that was mentioned repeatedly on the radio. TomTom kept insisting that I made a U Turn and it eventually gave up suggesting it after five or six miles.  The road was passable - just about - unlike the other carriageway which was stationary behind a broken-down lorry and other minor bumps.

I eventually joined the M20 at Maidstone and headed north to the M26 then the M25. I stopped at a very snowy Clacket Lane services at 01:45 for 30 minutes sleep before continuing homeward finally arriving home at 04:40

A stroll along the Llangollen Canal

Our mission for today was to do the whole of the LCT series in Llangollen.  We'd spotted the series at the end of last year and had put in on our to-do list straight away, we'd decided it would be a great series to do on a sunny day, we'd been umming and ahhing about it for a couple of weeks now the nights are starting to draw out nicely and as the forecast was going to be good for today we decided to go for it.

The plan was to get up early to arrive in Chirk for 7am to catch a bus to Llangollen where we'd walk to the start of the series at Horseshoe Falls then back towards the car in Chirk.


Well luckily all went to plan, apart from one minor hiccup - the bus we'd intended to catch didn't seem to exist so we had to wait around for half an hour for the next one to come, but this wasn't really a problem and it saved us having to take 2 cars with us - the bus ticket was £2.80 single each.
The walk is extremely picturesque and there's loads to see along the way:

We crossed 2 aqueducts - The 710 foot long and 70ft high Chirk Aqueduct - you start off in Wales at one end and walk into England when you get to the other side.  It was good to have a have a return visit to the Pontcysllte Aqueduct - we enjoyed a walk across it in 2010 after making a detour on our way home from a trip up Snowdon.

One of the prominent landmarks in the area is the Kraft/Cadbury chocolate factory in Chirk.

Some interesting facts about the factory:

They take delivery of specially picked cocoa beans from Ghana, clean, roast and grind them to produce cocoa mass for chocolate products - They process an average of 180 tonnes of beans per day, generating 40,000–60,000 tonnes of cocoa mass each and every year.  The factory was built in 1969 and the Chirk site was chosen following the demise of the region’s coal mining industry, providing jobs for hundreds of local people. In addition to the all-important cocoa mass, and its derivative cocoa butter, the 150 people working at Chirk today are responsible for producing Cadbury Drinking Chocolate and Cadbury Bournville Cocoa.


We were so lucky with the weather, although it started off at -4 the sun shone for most of the day which helped lift the temperature. 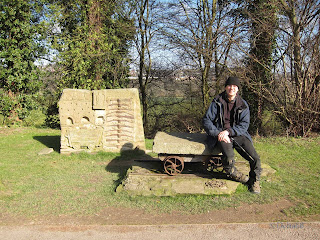 The canal has to be one of the best we've ever walked along, a very popular walking area but extremely pleasant and fantastic scenery.

The walk certainly was long, by the time we got back to the car we'd clocked up just under 19 miles and as the tow-path is quite hard underfoot our feet were very tired at the end.  Altogether the walk took us 8½ hours to complete from getting off the bus in Llangollen then back to car.

A brilliant day out that we'll always remember.