Mark:
About 30 seconds after reading about the unique icon that was on offer for special 1st of May events, we decided that we would hold one.

We initially planned to hold a pub event and arranged a venue but the following day decided to make it an open air affair in Stratford-upon-Avon.

I'd had an idea for a name for a Wherigo in Stratford for quite some time and decided to try and develop it in time for the event. Donna was less than impressed after a test run and advised on re-writing it. That done, it was tested and tweaked and then submitted for publication. We knew the final location was less than the mandatory minimum distance from one of our multis but we hoped it would be allowed as it is not possible to go in a straight line from one to the other. The reviewer rejected it so we appealed - after all, moving the final location would have meant yet more re-writing and testing. Luckily Miss Jenn approved it, Yay!

The 10 Years event itself was a great success!
The rain held off and an estimated 160 people attended including a trio from Slovenia who were in Stratford for the day, they'd bumped into Fun Loving Geocacher and he'd told them all about the event, how cool was that! 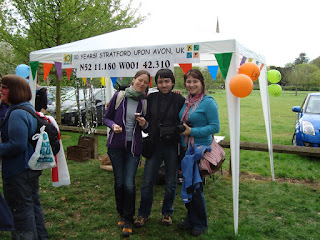 Nikiya and Nina and Beno from Slovenia

To encourage maximum 'mingling' we handed out bingo cards where the cachers had to track down other attendees who had accomplished one of the items mentioned.
Eg. Placed a cache in a foreign country, been caching for over five years, found a Locationless cache.

The questions carefully chosen with the names of those who had logged 'Will Attend' in mind so we knew all the squares would be able to be crossed off!
Three or four cachers had found a Locationless and one of them joked that he felt like a celebrity! 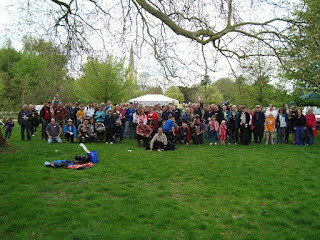 Our daughter Beth worked really hard making special geo-cakes and a special thanks to 104DaySummerVacation and Cakemaker for unexpectedly providing additional cakes - they were fabulous! 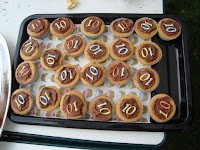 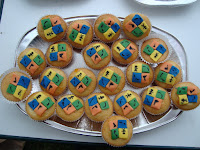 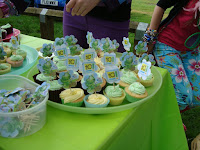 A truly enjoyable day that we’re sure we will remember for a long, long time
Posted by Donna and Mark at 07:59 No comments: