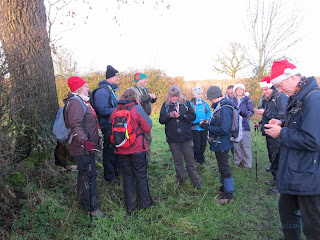 Today’s plan was to go to the Nearly Xmas in Yaxley Event and find a few caches beforehand. The Oundle and Back series looked quite enticing and we suspected that a few other cachers from the West Midlands would think the same thing so we decided to team up.

Got up at some unearthly hour for an 8 o’clock rendez-vous with Monki, Basketcase Crew, Unowho67, Blue Nora, Pfaffabouters, Shorty, lgxkls, Matt Smith and Sukigoeswandering at McDonalds Rothwell along the A14 - TAG and Lime Candy were supposed to meet us there too but there had been some confusion over which McDs we were meeting at and they had gone to a different one ......  Anyway, after a quick hot beverage and/or something more substantial, we headed to the parking by Oundle and Back #1 and were joined by TAG and Limey a few minutes later. The walk was classic izzacwilson with easy hides and good hints so all the caches were found easily.  Mind you, with 13 of us there would have been something very wrong if there had been any DNFs!  Half of us were from the West Midlands Geocaching region and half from the East Midlands so we signed the logs using a temporary team name of East Meets West to save space and time or EMW for short.  At the end of the walk it was clear that the West had won with the most finds hands down and could only leave the East team in awe of how things should really be done

Really enjoyed the walk, although the mud was a bit hard going in places as it was really sticky.  Along the way lgxkls handed out Stollen and Basketcase Crew had brought along Toblerone to share which helped keep us going.

We finished the 9 mile walk in 4 hours and as we'd bought loads of mince pies along with us we went back to the cars to share them out.  It was a bit like a mini-party as [Monki] had brought yummy chocolate along too.

The Oundle and Back series meets Glapthorn and Back loop here and it was a no-brainer really to do that loop as well. Well, for the rest of the team it was but we had already completed it back in October so we said that we would see them at the event and went off to do something else.


Normally we would just jump in the cachemobile and re-park for another walk.  Not today though, oh no! Today we were in my nice shiny new car and I am NOT going to let it get all muddy – EVER! We changed out of muddy trousers and donned clean footwear before getting into the car.  Neither of us were too keen on having to put muddy boots back on so after a few drive-bys we parked up in Oundle to do part of the Sonny's Moo Poo Series.  Looking at the map, the section from 13 to 24 looked like it was going to be on tarmac footpaths or something – nice and ‘clean shoes ‘ friendly.  As it happened, the tarmac path soon petered out and changed to grass but it was nothing to be overly concerned about.

Right! Time to go to Yaxley. Amazingly, we pulled into the pub car park just seconds behind Pfaffabouters and co.  We hadn’t had a proper lunch – just mince pies and Stollen, so we were keen to order some food right away. We hadn’t planned to do anymore caching this evening but there had been eight new Yaxley Nano caches released so after the Event we decided to go and find them as well.  Night-time urban nanos are so much easier in a group.

After the 91 mile drive back home, we toasted our sandwiches on the George Foreman for supper! A perfect way to end a very enjoyable day.  The car even stayed mud free!

The plan for this Saturday come rain or shine was to head up to Northamptonshire again to do the caches around Woodnewton - we seem to spend a lot of time in this neck of the woods at the moment - loads of great walks to be had.

Arrived in Woodnewton for 8.30am the, temperature had just dropped below freezing on the way but the sun had just come up and looks like we're in for a good day.

Woodnewton is a very charming village and we later learnt that its main claim to fame is that Nikolai Polakvos, Coco The Clown, retired here in 1973 and died there shortly afterwards and is buried in the graveyard of St Mary's Church.

We decided we'd complete both walks without going back to the car, this looked ideal as we prefer, if possible, to do all the walking without having to reposition the car as it's hard to get yourself going again once you've lost the momentum.  This worked out perfectly as we completed the walk in 6½ hours before going on to do a short multi.

All caches were easy to find with good hints, only a couple of DNFs but it's possible these may have been washed away in the recent floods.  Quite a lot of the walk was very muddy underfoot but this is to be expected this time of year and especially with all the recent rain and flooding in the area.

before I agreed to continue through the field (see below)


A fab walk that we'd highly recommend - in fact we'd recommend any IzaakWilson or Poshrule caches.