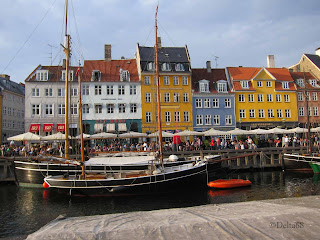 Sweden and Denmark
We have always set ourselves personal geocaching challenges other than just purely number hunting, such as the 366 day calendar, D/T grid, county map, oldest caches in UK, cache types/countries.  We became aware of the Jasmer challenge a few years ago and have been slowly filling in the grid.  The Jasmer challenge is to find at least one cache placed per month since Geocaching started in May 2000.

We decided at the beginning of this year to make a concerted effort to fill in as many as we could on the grid.  Mark's crazy trip to The Netherlands back in March was to fill in March 2001.

We had 5 months left to fill only 2 of which are possible in Europe.  September 2000 near Copenhagen and August 2000 near Stockholm.   So back in January we booked our flight to Sweden. While looking at what other caches to do in the area we spotted some challenge caches in Copenhagen which required finding a certain number of cache types per country.  The highest being 6 types in 6 countries.  This really appealed to us and we decided that from then on we'd try and find as many different types as possible when visiting other countries and even set our own similar challenges.

We flew from Stansted on Sunday to Malmö in southern Sweden picked up a hire car and drove to our accommodation.

On Monday we drove across the Oresund bridge to Denmark found Kippers in the Jungle, really pleased to finally find this one as we've been looking at this cache for so long now, we even met some German cachers just as we arrived back at the car.  It's always great fun bumping into other cachers when abroad, 'we all speak the common language of Geocaching', this is a quote from a Dutch cacher we met whilst in Belgium a few years ago.
We found 7 other cache types and rounded off the day sight-seeing in Copenhagen before heading back across the bridge (about £40 each way!)  to Sweden.
Tuesday we hired some bikes and spent a great day cyclo-caching.........  That's what we'd like to say but in fact it was....... Tried to hire some bikes. We were staying in Lund which is one of the most cyclocentric towns in the country.  Everyone has a bike and every second shop is a bike shop (or so it seems) so you'd think it would be easy to hire bikes. Wrongo! Why would anyone want to hire a bike if they already have one?

The hotel had bikes for hire but someone had already hired them out to. The receptionist told us that there used to be other hire shops but they had all closed down.  The shop just down the road didn't hire bikes nor did another shop we tried. We eventually located another bike shop which was rumoured to hire bikes but it was closed. The very helpful lighting shop owner next down assured us that the shop did hire bikes but they didn't open until 10:00... if we were lucky.  By about 10:30 we were finally ready to set off for a great day cyclo-caching.  The cycle paths and routes are amazing, you can cycle for miles without seeing any cars. 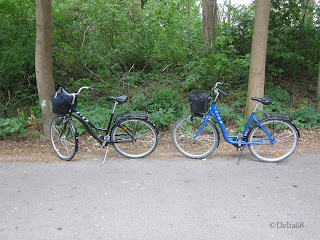 Wednesday.
Checked out of hotel and made our way towards Malmo stopping to do an Earthcache, Letterbox and a Wherigo on the way.  The Wherigo was around an immaculately manicured park which we later discovered to be a horticultural university. Once in Malmo we filled up with Diesel and returned the hire care and explored on foot.
Then it was off to catch the night train to Stockholm.
This seemed a good idea when we booked it because driving to Stockholm and leaving the car there would have incurred a £100 fee. We would also have had to pay for another night's accommodation either in Stockholm or on the way and it would have been a day of solid driving. Taking all that into consideration the night train seemed a good idea :-)

We left Malmo at 22:35 and arrived at Stockholm at 06:00 having had the worst night's sleep in ages. In all fairness, it's the first time we'd been on a night train but we have been on a night ferry and assumed the compartment would be a similar size to the ferry cabin. It was not! 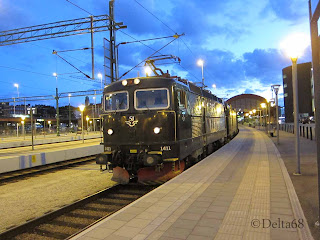 Thursday
Luckily we were able to check into our hotel straight away so without further ado we dumped our bags and headed off to hire some bikes (no time for relaxing). 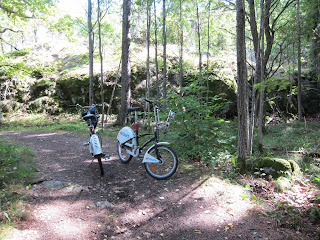 Stockholm have a City Bike scheme where you can hire bikes for three days for £16. You are given a card which you have to swipe at a machine to access a bike. The bikes are at various locations in the city and you can leave the bike and walk if you want or just swap bikes if it seems too noisy, uncomfortable etc.  There's even an iPhone app so you can see where the nearest bike station is and how many bikes are there! The only proviso is that you have to 'check in' to one of the many locations every three hours. The cache we wanted to do near Stockholm is 'Match Stash' - a cache placed in August 2000 - one of only four in the whole world from that month! TomTom reckoned it would be about 7.5 miles and take about 40 minutes - this was with 'cycle route' selected. Not sure why but it was a lot further and took a lot lot longer!


We had swapped bikes at the last City Bike stand before heading out of the city and made it back just outside the three hour time limit. Mark got a 'warning' for being late. Three of these warnings and the card is blocked, or so we were told.  It was just over a 20 mile return trip on the 'city' bikes!  I doubt the bikes had ever been taken that far out of the city before and we feel sure they weren't meant for taking into the forest!
It just so happened that there was an Event at 16:00 at Central Station.  Four brave/crazy Swedish cachers were heading off on an eight day backpacking/caching expedition somewhere up North and had arranged the Event so mere mortals could see them off. We had a really pleasant hour or so chatting to lots of  other cachers and making new friends. 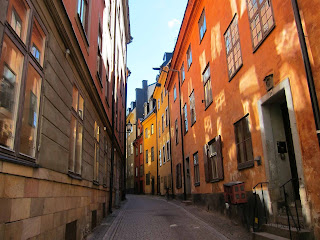 Friday
Spent the day exploring Stockholm/sightseeing and caching on the dreaded City Bikes  ;-) before catching  a coach to the airport. When we booked the plane tickets we hadn't really considered where the airport was - it has 'Stockholm'  in the name after all! Stockholm (Skavsta) is 100km from Central Station and the coach takes 80 minutes to get there! Luckily we had found this out earlier in the day when inquiring about coach tickets so we knew to allow plenty of time!

New stats summary
Two new countries visited
August and September 2000 'Jasmers' ticked off
A new 'most northerly' cache at N59° 19.957 (we actually found a Wherigo whose final location was further north than this but the listed co-ords are 0.19 miles south so doesn't count)
Eight cache types found in Denmark
Nine cache types found in Sweden

All in all an amazing, exciting and fun trip.  Although it was exhausting to say the least and we could've done with a bit more time to relax so Donna has said she is definitely organising the next trip