In 2016 the UK Mega was held in Llangollen in North Wales, we were only able to attend the event for the day so didn't get chance to do many of the surrounding caches.  We've been planning to come back ever since.  There was a post on Facebook a few weeks back saying that some of the caches would be archived early next year so we decided to make a concerted effort to get the puzzle caches solved and get over and find the caches.  We had a day's holiday left to use up for this year so we decided to have a long weekend in the Llangollen area.

We set off early afternoon on Friday and stopped overnight in Whitchurch.  We enjoyed a walk around the town and found a few caches. 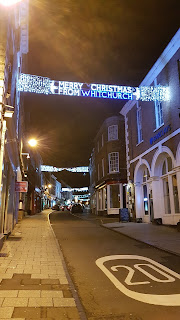 Saturday morning we got up bright and early ready to start on the 2016 puzzle caches around the lanes of Wrexham.  The plan was to find as many of the caches as we could on our bikes in the short hours of daylight that we had. 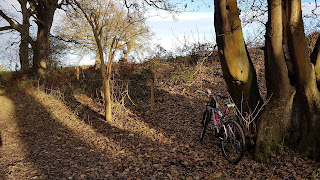 We really enjoyed cycling around the lanes finding the caches.  The weather forecast had been for rain showers throughout the day but we only got caught in a couple of light showers and on the whole the weather was bright and sunny. 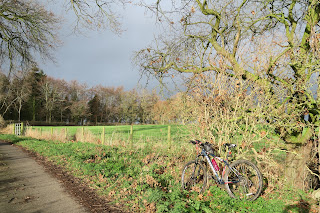 Later in the afternoon we headed over to Llangollen.

It rained all night and when we woke up it was raining still, it didn't look hopeful for our bike ride but after we'd eaten our breakfast the clouds lifted and the sun came out. 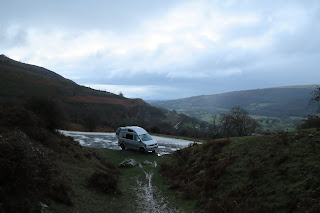 The plan for today was to do the MEGA series on our bikes which was a linear route of about 8 miles.

The route was quite hilly so we planned to stop for the caches on the uphills on the way out then on the return leg stop for the ones we missed.  This proved to be a good method and we made very good progress.
The route was very scenic and is one of the best caching series we've done on our bikes. 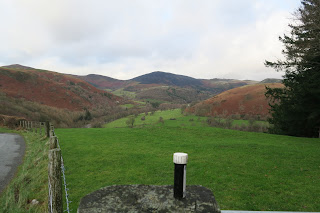 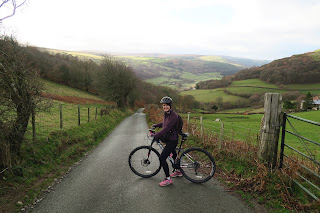 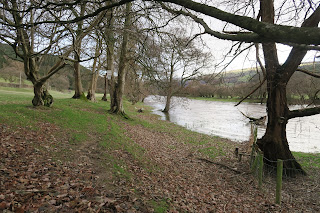 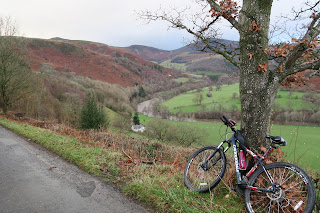 We were about 1½ miles from the end and the sky went very dark, the heavens opened and the rain came down, very quickly the roads became more like a river and we were glad to get back to the van to dry off.  We finished the series in just under 4 hours. 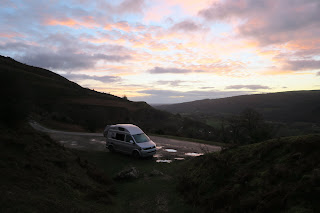 A bit of a later start to the morning and got up in time to see the sun rise.  The skies are much clearer this morning so hopefully the rain will stay off today.


There were a couple of Earthcaches nearby so we decided to do those first,  Really interesting, I love Earthcaches that involve looking for fossils. 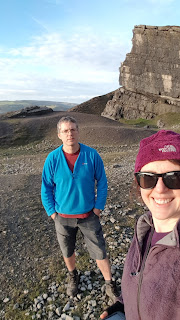 We'd run out of daylight yesterday to do the caches around Horseshoe Falls so we decided to do those next.  We relocated the van and parked in Berwyn to start our walk.

Horseshoe Falls is a weir on the River Dee about 5 kilometres north-west of Llangollen. 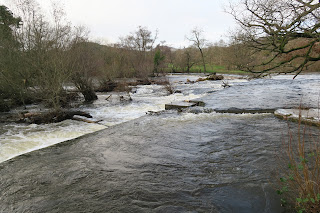 We last visited back in 2013, the river wasn't as fast flowing then.


In 2009 Horseshoe Falls and 11 miles of the Llangollen Canal was awarded UNESCO World Heritage status.  This includes the Pontcysyllte Aqueduct .... for non-Welsh speakers this is pronounced 'Pont-ker-suck-tay' 😁and Canal (including Chirk Aqueduct near Oswestry.  The canal was awarded World Heritage status because of the bold civil engineering solutions needed to construct a canal with no locks through such difficult terrain. 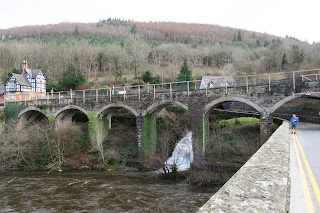 It was very pleasant wandering around finding the caches and being a weekday it was much quieter. 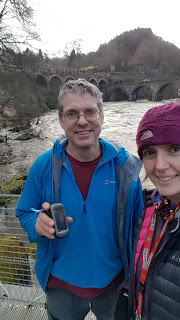 The Chain Bridge is a footbridge over the river Dee at Berwyn near.  It is jointly owned by Llangollen Town Council and Llantysilio Community Council and the bridge links the two communities. The current bridge is the third bridge at this location, the previous bridge was destroyed in a flood.  There are some interesting old pictures of the bridges here

On the way home we stopped off at Pontcysyllte to find a puzzle cache that I'd solved by chance a few days ago.

By this time it was starting to get dark and we decided, very reluctantly, it was time to head for home.

A great weekend, we'll definitely be back in the area soon.

Email ThisBlogThis!Share to TwitterShare to FacebookShare to Pinterest
Labels: Llangollen