We'd stopped off in Luxembourg in September 2010 on the way home from a family holiday in Belgium. We only had time for one cache but that was enough to ‘colour in ‘ the country on the stats map.  However, since 2013 we’ve tried to find different cache types in each country we visit so the one solitary cache for Luxembourg stood out in our ever increasing list 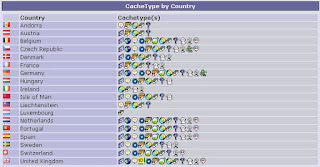 So, when a Mega event was announced we knew we’d have to go. The timing wasn’t ideal as we'd already booked a short break to Berlin for the week before.  Anyway, a plan soon took shape and the idea was to drive down to Kent on the Wednesday evening, cross on the tunnel early Thursday and return Sunday evening

We hadn’t reckoned on ferry strikes and watched the news with interest as this obviously had a knock-on effect for Eurostar.  In the end we decided to shorten the trip and make the crossing early Saturday morning and return Sunday hoping that the worst of the ferry problems would have blown over by then.

Shortening the trip meant that Donna wasn't quite so keen (can't understand why) so I decided to go it alone.  I left home Friday afternoon and made my way down to Kent  to do a couple of Wherigos on the way.  I took my time going to Kent and by the time I got there the mpg-ometer was showing an average of over 63 mpg!

The crossing was booked for 3:20 so I arrived early in the hope of getting on an earlier crossing. No such luck.  Although the access road was jammed full of queuing lorries, the car park was almost empty and the crossings were being delayed due to illegal immigrants in the tunnel at Calais.


Eventually arrived in Calais and headed to Luxembourg -  a mere 260 miles or so.  Arrived at the Mega venue, paid the 10 Euros fee and headed into the building.


The venue appeared to be a disused warehouse and contained the usual assortment of stalls. Chatted to few cachers and played the new Mastermind themed Wherigo before heading off to do the Lab caches.  Some of the Lab Caches were at the Mega venue but others were quite a distance away.  No problem though with my handy geo-bicycle.  Called in at the Mystery solving event, and also found a solved-at-home-puzzle.

By the time I’d reached the top I was fit to collapse, running low on water and having difficulty thinking clearly.  I needed a Multi and one started at the same location so I worked out the final but decided it would take too much effort in the heat to get to GZ.  The whizz back down the hill was nice and cooling and the sudden downpour on the way to the Wherigo final was pretty refreshing.

Anyway, time to go further afield to find a few more cache types so back at the car, thirst quenched and aircon on. I soon started feeling human again.


No problem – now for a Multi. The selected one was about a mile or so from the Virtual as was a bit unusual as it was a three-chirp cache! We’ve done a two chirp before but never a three. Pleasant walk through a cool wood.  The Oregon detected the chirps perfectly and the cache was a quick find. 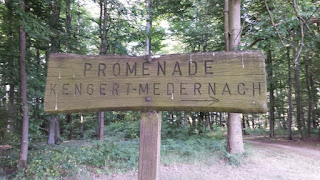 Now all possible cache types done for the day so headed off to do another Wherigo (only two left in the country to do) before heading back to Dudelange for the evening. There was music blasting out at the Mega and lots of people drinking and eating hotdogs etc but I just took the opportunity to rinse out my salt encrusted T-shirt before turning in for the night.

Had a pretty good nights sleep and after breakfast headed to the car park for the CITO.  First to arrive about  07:30 - I had planned to cycle round the town doing a few more caches but after getting about 100 metres up the road decided it was far too hot and returned to the car to wait for the organisers and other attendees to arrive.

One of the organisers had brought croissants for everyone to enjoy before the litter pick – very nice.
The park itself looked pretty tidy at first glance but it was surprising just how much litter there was and very soon quite a few bin bags had been filled. Refreshments in the form or bottles of water were very welcome and then it was time to depart.

Next stop, the final Lux Wherigo. Another enjoyable walk around a wood


Right! The only thing left on the to-do list was a French Wherigo.  Although there are more Wherigos in France than in England, none were near to our usual routes by Calais – until now that is! One was published near Gravelines just a few months ago so I stopped off to play it on the way back to the channel tunnel.

Arrived at the Channel Tunnel early and was offered an earlier crossing – super!

Finally arrived home at 22:25 having driven 1024 miles with the car showing an overall average of 48 mpg.  Pretty good I thought.