A busy February so far

I haven't had much time to update the blog the last couple of weeks, been really busy with work and other things so thought I'd find time today whilst it's pouring down.  We had a very short local caching trip planned this afternoon with Whisper our yellow lab but decided to cancel as the weather is so awful.  Whisper has put on a bit of weight so we're trying to increase the length of her walks to get the lbs off her.  Last weekend we took her on a very nice 8 mile walk around The Greenway in Kenilworth, which included the Geohound Walk, really dog friendly and great caches, some of the others were puzzles that we'd solved ages ago, also we found Katie's Cache, an old one from 2004 that had been on our to-do list for ages. So it was good to tick that one off.

Poppy, our black lab will be 14 in a couple of months and is not up to the longer walks, also she's quite slow now so we don't usually take her on caching trips and it's a nightmare lifting them both over stiles etc.  Poppy has had to stay indoors for the last couple of weeks due to her having an operation to remove a tumour on her foot.


Just a brief summary of what we've been up to (caching wise) this week:

I've mentioned Sunday on The Greenway already but last Saturday we went up to the Peterborough area for a day out (again).  It was a bitter cold wind and barely got above freezing the whole day, we set off before sunrise and did Yarwell and Back, Nassington and Back and Elton and Back, altogether walking around 17 miles and cached until the sunset.  All great walks and great caches.


On Tuesday Mark had some holiday from work he needed to use up, I couldn't get the time off at short notice so he went caching on his own and headed East to do Catworth Cult TV Circular, Kimbolton Krunch, and Shelton Scooby Doo. 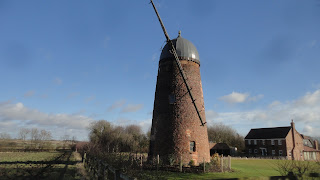 At #3 Shelton Scooby Doo he caught up with another caching team, djw147 and they completed the series together.


Yesterday we had another early start and as the forecast was 'sunny' for Peterborough and raining for just about everywhere else we thought we may as well have another trip out Cambridgeshire way.  We set off once again before sunrise and cached until sunset all together walking approx. 20 miles.  Taking in, Broughton Bananarama, part of the Woodwalton Waggle, Sawtry Fen Fumble and part of Alconbuy Amble.  A great day out and a memorable one too as just as we were leaving Alconbury we stopped off to find a cache, it was only a short walk but just before we set off we spotted a barn owl flying around, I managed to grab a few shots and then as luck would have it the beautiful bird flew past the car again and I was able to take some film - amazing!