A Day Out In London


We visited London back in our pre-caching days in 2005 and did all the usual tourist stuff and have been wanting to return for quite a while.  The cost of getting there by train is prohibitively expensive but at the weekend we saw a Chiltern Railways TV advertisement for travel to London from Solihull for £1 each way to promote their new fast mainline service - only 1 hour and 22 mins!!  Without further ado the tickets were booked.

We left our house at 06:15 to be on the train in Solihull for 07:03 and arrived at Marylebone at 08:30. We'd bought off peak travel cards for the underground and these were valid from 09:30.   Not a problem as we had in mind the perfect way to fill the time - Abbey Road Web Cam  outside the famous Abbey Road Studios which is only a short walk from Marylebone.

The webcam overlooks the zebra crossing made famous by The Beatles' album cover.  The location of the crossing becomes obvious by the hordes of tourists milling around trying to recreate their own 'album cover' photo and the webcam makes quite compelling view.  Mark had prearranged with a colleague to do the screen grab but we also phoned our son (who was at home just getting ready to go to college) and asked him to take a screen grab as well.

Then it was onto the Tube from St John's Wood to Westminster.  Here we did the The Palace of Westminster virtual and a short multi, then across the river to Parliament View then it was time for a quick rest at a pavement cafe  and a VERY tasty cup of coffee.


Next we continued down to Banksy woz ere, after finding the cache we had a look in the Graffiti Tunnel.  This 200 metre disused road tunnel was the location of the Banksy Cans Festival back in 2008 and is now a designated area for graffit artists to display their work legally.  Unfortunately all Banksy work seems to have now been painted over.


We had a surprise find at Southbank lion as it was disabled and we had a look on the off chance as we were passing and it seems that Dorsetgal & Geodog had replaced the cache the day before, there was also a little gift in the cache of a pathtag for the next finder to celebrate the cache having had 1900 visits!  Then it was onto BlindSpot right next to the London Eye, where we met a Swiss cacher, Smurfy_CH who was on holiday in London, we both arrived at GZ at the same time.

Then after stopping for our packed lunch at the bottom of the Monument we were back on the Tube and onto the next group of caches on our 'must do' list.  TechNOLOGY was a straightforward virtual and then round the corner for Last Delivery (believed to be UK's most visited cache!) which was probably my favourite of the day as it was such a tranquil spot in the middle of such a busy city.


A Meating Place for Martyrs virtual took longer than it should as we spent ages looking in the wrong place due to having a poor signal inbetween the tall buildings.

We then walked down to St Etheldreda's and 16th Century pub which has to be the quaintest pub we've ever seen, we were getting pushed for time so no time for a drink just a quick look inside.


Then back on the Tube : Chancery Lane to Oxford Circus. 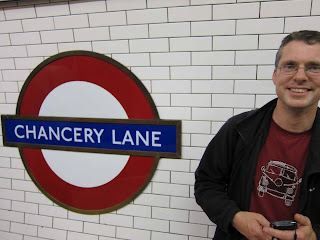 Managed to grab the Oxford Circus webcam image using the iPhone but the image only changes every five minutes or so, so we were standing in the middle of the road for quite a while.  However, I managed to occupy myself by taking arty photos of red things!


Then we only had half an hour left before we needed to be on our train so it was back on the Tube to Marylebone and straight onto the train and back to Solihull.

We had such a fun time and it will definitely go down as one of the best days we've had caching, a very memorable day.  There are still plenty of old and interesting caches to do in the middle of London... looking forward to the next rail offer!
Posted by Donna and Mark at 06:00

Email ThisBlogThis!Share to TwitterShare to FacebookShare to Pinterest
Labels: London