This trip came about as several pieces fell into place at the right time.  I (Mark) noticed the 'G' geoart last November and thought it would be cool to go and find them. I then looked to see if there was a Mega Event anywhere in Norway and as luck would have it, there was one in May just down the road from this Geoart.  A quick check on Ryanair’s website and they had flights out on the Friday and back on the Sunday at £29 each way.  Better still, the flight out was early in the morning and the return flight was late at night giving almost three full days in Norway. This was really good to see because all too often, return flights are in the morning giving very little time for anything on the final day.  Donna had run out of holiday allowance but said I could go if I wanted to so I did!😎 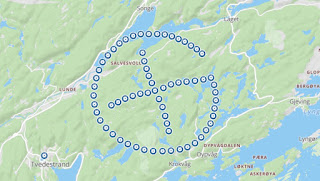 As anyone who is familiar with our caching style will know, we always try and do the maximum possible number of cache types per country.  Norway has all possible types but the last remaining webcam is a bit of a drive away. By ‘bit’ I mean over 150 miles and four hours each way!  It would be a challenge fitting this into the trip. 😅

A Friday night meet and greet event was published as was a CITO on the Sunday so I knew I’d have to include those into my trip.

Yet another piece of luck was that another Event and another CITO were published for the day of the Mega. This was ace news as it meant I wouldn’t need to be in the area for the Friday or the Sunday morning.
Anyway. I arrived at the airport at about 10:30 and picked up the hire car. I had selected a small automatic as it was only a couple of pounds more than a manual and as automatics are usually less common in Europe there’s more chance of a free upgrade.

Not this time though. The car was a Toyota Yaris Hybrid and it was pretty impressive. Not the fastest car I’ve ever driven but easily the most economical.  It would happily trundle along on electric with the petrol engine switching itself on and off as required. It was doing over 60 mpg and that was certainly not taking it easy 😉 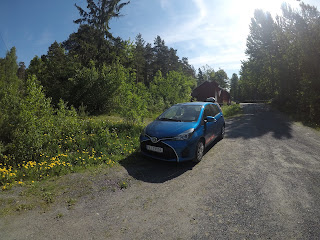 First cache a Mystery (well a Challenge cache)  about three miles from the airport then a Virtual and Earthcache nearby.

Next stop a Multi I’d pre-solved about 70 miles away in the direction of the Mega Event. This should have taken about an hour and a half to get there along the E18 but the road was closed in several places for upgrades and new tunnels. The Norwegians seem to love tunnels....

Some time later I arrived at the Multi and then did the first five of the G for Geocaching Wherigos.

When I returned to the car it was roasting hot and I thought it was a bit late to start on the main Wherigo series so decided to set off to do the webcam.


Four hours later I arrived at Egersund and messaged Donna asking her to do a screen grab. It’s very hard to Phoon and screengrab at the same time.

Job done, headed back stopping for a nearby trad on the way. I arrived at the event parking location at about 01:00 and slept as well as I could in the car.
I’ve slept in the car on solo caching trips on a few occasions and it’s been OK; but that was in a spacious Ford Mondeo estate. You can probably imagine that a Yaris is not a pleasant car to sleep in.

Saturday
The event was 06:30 to 07:00 and I was up and awake by five. Chatted to a few other cachers at the event and joined in with the CITO before heading to the nearby town of Arendal to do the first batch of ten Lab Caches.


Once these were all logged I headed back to the Mega stopping at a Rimmi 1000 supermarket on the way. We’ve been to some expensive countries but Norway is horrendous for food. A tub of cherry tomatoes which would cost about 60p at Aldi in the UK were abut £2.50 and sliced cheese about £4 per pack!  Continuing on towards the Mega, I found some local caches before it opened at midday.

One of the Lab Caches was throwing a Viking axe at a target. Here's my attempt:

Once all of the second batch of Lab caches were logged, I left the site and headed to do the Wherigos.

This is a series of 67 ‘Reverse cache’ Wherigos. This type of Wherigo can sometimes have you going round in circles but as these were placed at close intervals and along a path it was just a case of going to the next one each time.

The co-ordinates were a bit iffy on a lot (due to a combination of tree-cover and the method used to set this type of cache I presume) and some of the hints were confusing.

All the hints were originally in Norwegian so I had translated them all before-hand in preparation.

The trouble is, you don’t know how accurate the translation is until you reach GZ and ‘under mountain’ is not of much use sometimes

I’m not usually too keen on linear walks but the linear nature of these caches (roughly set out like the branches of a tree) meant that I could have another look for caches on the return and it was quite remarkable how I could be totally stumped first of all and then find that cache instantly on a second attempt.

It was 10 pm by the time I finished numbers 6 to 43 and after getting my water bottles refilled at a garage a couple of miles away, I parked up for another awful night’s sleep.
Sunday 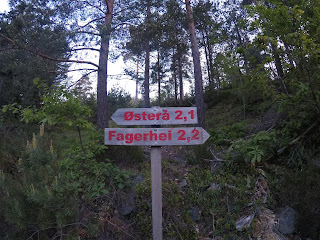 Up bright and early, just before sunrise, to continue the walk. Finished all the Wherigos – it had taken a total of about thirteen hours – and headed towards the area where I’d done the Multi on Friday. This is a series of 101 Multis along cycle ways and quiet lanes. Some of the cycle way ones are not really possible by car so I headed to a stretch along a lane and as luck would have it there were two other cars there already. The Norwegians had solved all the Multis before hand but I hadn’t bothered because it was tedious translating every page. Anyway, I tagged along with these other two cars up to the end of the trail


My driving route for  the weekend: