It's been a while since my last blog post.  I've been really busy with other things and back in May I increased my hours at work so have very little spare time again.

I created a separate blog for our trip to the states which you can read here.

During our trip to America we completed our Jasmer Grid which was really great as it's something we have been working at for a few years. 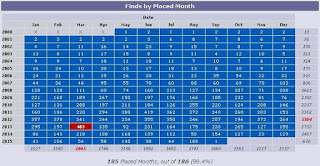 The Jasmer Challenge requires finding a cache placed in each of the months since Geocaching started in May 2000. To give you an idea of how tough this is, there are only 115 caches remaining which were hidden in 2000  - only 7 in Europe! It's not even possible to complete the months for 2001 without leaving the UK!

We also found ourselves very briefly at the top of the Wherigo Leaderboard - not just for the UK but No. 1 in the World - but by the time we returned home and logged them 3 weeks later we had been pushed back into second place - oh well we didn't do too badly considering our trip was primarily a holiday and not a caching trip. 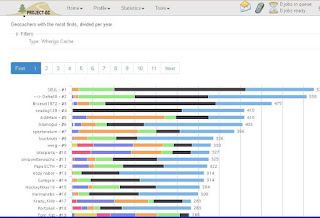 This weekend we had a fantastic trip to South Wales.  We recently bought a couple of new mountain bikes as our old ones had reached the point where they needed too much maintenance and are pretty much beyond repair and our folding bikes are just not up to off-roading, although we've certainly put them through their paces.  Our Son (drempels) is mad on mountain-biking and after seeing the fun he's been having since he's been at uni in Wales we decided to treat ourselves to a couple of 29ers - they are amazing!  We had so much fun.

Here are a few photos of our weekend in the Port Talbot area.