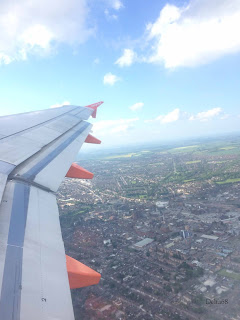 We really enjoyed the last two Giga events in Munich and Mainz and had considered attending  the Xanten Giga but we didn't know how feasible it would be to fit it in around other non-caching commitments so the decision to attend was only really made 3 weeks ago, in fact it was after chatting to some caching friends, Cache42bears, at the Mainz Giga event that we were persuaded to attend.  They told us what a great location it was going to be held at and that it was really worth a visit so when we arrived back home we decided to put the wheels in motion.   All our holiday and time off work has already been booked for this year so we knew that if we attended then it would have to be only for the weekend.  We managed to get flights from Luton to Dortmund for a fairly reasonable price so then we had a couple of weeks to plan our trip.

We had passed through Dortmund last year and had already done the nearby webcams so Mark had planned a different route further afield taking in three webcams and a couple of Wherigos and likewise, the return trip on Sunday would take in two webcams and as many Wherigos as possible.

We travelled down to Luton for our 16.10 flight, arriving in Dortmund an hour later!  We had booked a small hire car which we thought would be a Corsa or similar but when we went to pick it up we’d been given a free upgrade to a rather smart BMW – thanks Hertz! 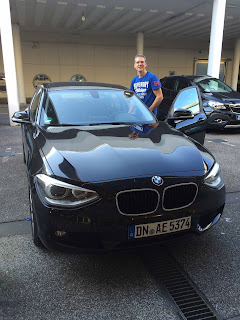 We set off in the direction of Munster to do a webcam stopping to play a Wherigo on the way and as we approached the webcam we noticed there was someone behaving suspiciously like a cacher - it was Ovaron. We chatted while waiting for the picture to refresh and it turned out that he was a German cacher who lived in America, he had returned for the weekend and was finding mainly webcams.  It was nice to meet and chat to another cacher who was focussing on the rarer stuff.

The journey took a bit longer than planned and after stopping for another Wherigo and another webcam we started to get concerned that we wouldn't get to the accommodation before the arranged late check-in time between 11pm and midnight.

After experiencing such cold weather in the UK for so long it was lovely to finally enjoy some sunshine.  The weather was a lovely warm 20 degrees, it had struggled to get above 10 degrees back at home this week. However, the downside of nicer weather is possible thunderstorms and we drove through a real beauty! It absolutely threw it down and each flash of lightning lit up the landscape to reveal silhouettes of the trees and hills...


Our accommodation was at Landhaus Spickerman a guest house about 3 miles out of Xanten.  We finally checked in at midnight then up again at 6.30 ready for breakfast at 7.30.  As it turned out our accommodation was big enough to sleep 6 and was lovely and spacious.

Breakfast was served a couple of minutes drive away in a pub which was run by the guest house owners.  There were quite a few other cachers at breakfast so plenty of people to chat to and everyone was there to attend the Giga.


We headed to the event next and as it was before 9am we joined the queue to buy tickets.  We had attempted to pre-book tickets but unfortunately the organisers didn't accept PayPal so there would have been a bank charge of around £9 so we had decided to risk it and purchase on the day but frustratingly this meant we weren't able to buy the official event geocoin.

We knew there would be bike hire available but we didn't hold out much hope as we hadn't pre-booked so we headed straight for the bike hire station after buying our entry tickets and we were in luck!  The bikes were brilliant fun and made very quick work of the 30 lab caches.  The lab caches had been released over the 3 days with the intention of doing 10 each day but we wanted to get them all done on the Saturday. 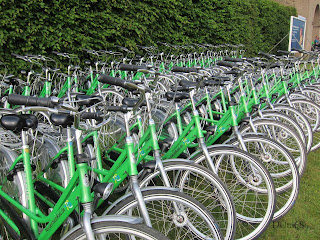 The venue for the Giga was the LVR-Archaeological Park in Xanten which was on the site of the ancient Roman city of Colonia Ulpia Traiana and is Germany´s biggest archaeological open-air museum, a very spacious area that could more than accommodate the number of geocachers attending. The partially reconstructed buildings had quite a surreal appearance.

The Lab caches were of three types, one set guided us around the town of Xanten itself  and involved answering questions relating to historic properties and locations.  The next set which we did simultaneously were available for just the one day and they had a Roman theme involving solving a puzzle at each one.  Some of these were pretty tough but the number of cachers meant the there was always someone to assist if need be and was a great way to get chatting to other cachers.

It's always good to bump into caching friends at these type of events and it was lovely to see cachers we know from back home in the UK... DesG,  Stompy and Stampy, Linda of the_Dolans and Emma.  It was also really great to bump into our German caching friends Kikilotta who we first met at The Great War Mega Event, then bumped into them again in Munich and even at a CITO event in the UK!  It was lovely to meet up with Ovaron again, the German cacher we'd met yesterday at the webcam near Munster.

After completing the two sets of Lab caches we embarked on the third set which were located around the Xantener Südsee (Xanten South Sea lake) and interwoven with a series of Traditional caches. We had planned just to circumnavigate the Südsee but as it was so much fun on the bikes and the weather so lovely we decided to go round the Nordsee  as well.


By now we'd work up quite an appetite - having only had a coffee and a piece of apple tart since breakfast so we handed back the bikes and headed to the cafe in the grounds of the park only to find they had just stopped serving hot food.  Oh well, Maccy's it is then! 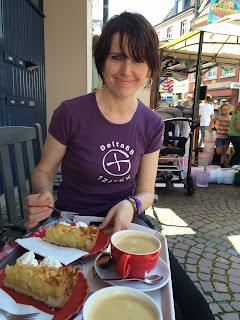 We stopped off at McDonalds en route to webcam #3.

On the way to the webcam I checked the picture on my phone and saw that it was virtually impossible to see anything due to the low sun so, to kill a bit of time we decided to play another Wherigo - of course!  A nice easy one and we were soon back at the webcam where the sun had dipped behind the buildings making for a much better picture.  Two more Wherigos before heading back to the our room. The end of a brilliant, fun-packed day and what has to be the best Giga event so far! Bit off a lie-in until 7.30 as breakfast was served from 08:30 after which we headed south to the first Wherigo of the day.  We had half-planned to attend one of the four or five morning events but that didn't start until 10:30 and it would have meant killing time which would have been better spent doing... you guessed it, more Wherigos and Webcams

The next webcam was in a market square in an area of Düsseldorf .  We couldn't find anywhere to park again so I had to jump out to get the picture while Mark waited with the car hoping that we weren't going to get a telling off, the picture only refreshed every 10 mins but luckily I got there on the 9th minute! The next webcam was a similar situation and it was even busier this time so another one grabbed quickly by myself and with this one the picture refreshed every every few seconds. 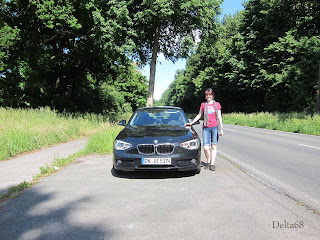 Just time for a few more Wherigos on the way back to the airport.  By the time we handed back the hire car we'd driven 330 miles and used about  £27 worth of diesel.  Pretty impressive as we weren't exactly crawling along on the autobahns!

So, back on the plane to Luton and then home to start planning the next trip... 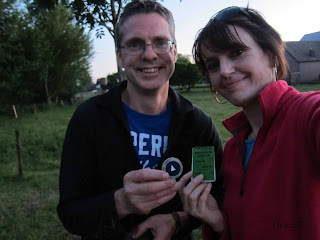