The date of this post is a just the date that the first of the series were published. Setting the series started some weeks earlier Mark had the idea of setting an 'Advent Calender' themed series back in September but then had to try and find a suitable location. After hours of studying MemoryMap and running PQs to see what caches were where, Donna suggested the Abberley area.
There were surprisingly few out there and it looked promising on the map.

We managed to buy two sets of twelve differnt stamps off ebay and set about making laminate cards for each cache with a picture of the stamp on it. Prepared a load of containers... 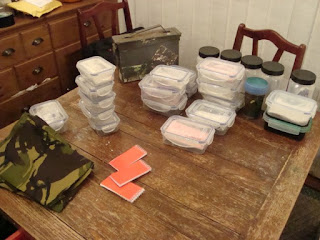 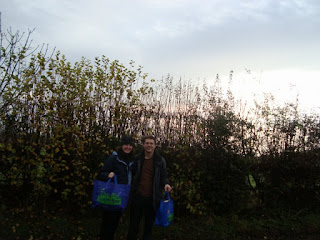 We asked the reviewers to cast an eye over the first lot and we were told to move number 5 - it was originally at the top of Woodbury Hill within the bounds of the Iron Age Hill Fort and thus making it unacceptable.

This was moved on a very wet day but the visit was cut short because a problem arose at work which Mark had to attend to.

During our next visit we placed number 13 to 24 having trimmed down the container for 13 so it fitted better!

The fourth visit saw us place the final after checking out several other possible locations. We placed it where it is so it wouldn't get noticed while doing the rest of the series... sorry! :-)

So, after four visits (50 mile round trip each time) all caches placed and ready to go!


The formula for calculation the final took a bit of working out as it uses each of the numbers from 1 to 24 once and only once. This way any cachers having a DNF or two would still be able to go for the bonus.

Donna thought of the series name and we original planned to get the caches published one per day but some got held up and in the end we just decided to publish them all at once.
Posted by Donna and Mark at 21:59